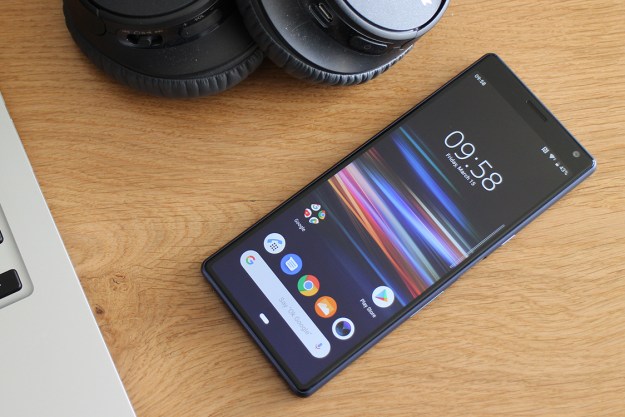 Sony’s trying to reboot its smartphone business with a simplified approach at the premium end of the market. The company’s one true flagship, the Xperia 1, is flanked by a couple of cheaper devices that sit somewhere at the upper end of budget or the lower end of midrange. The smallest and cheapest is the Xperia 10, which costs $350, exactly the same as our current favorite budget phone, the Nokia 7.1, and $50 more than the attractive Moto G7. The question is: Can Sony make a compelling budget phone?

Smartphones have become increasingly homogenous, but Sony’s smartphones have always stood out a little, and not always in a good way. The Sony Xperia 10 is immediately recognizable as a Sony phone; it has an angular shape and it’s taller than other phones.

Over the last couple of years, big bezels surrounding the screen have been responsible for that extra height, but in Sony’s latest phones, the screen extends almost to the edges on the sides and bottom. The top has a chunkier bezel for the front-facing camera, other sensors, and an earpiece. In finally slashing those bezels down, Sony decided to expand the screen instead of shrinking the body, so you get an unusual 21:9 aspect ratio.

The result is a tall, but narrow phone. It looks attractive and proves very comfortable to handle. If you’re a fan of Sony’s design language, then you’re going to like the look of the Xperia 10.

There’s a USB-C port flanked by speakers on the bottom, a 3.5mm audio jack up top, and a power button, fingerprint sensor, and volume rocker on the right side. Lest you forget this is a budget phone, the back and sides are a single piece of polycarbonate with a metallic sheen. There’s a horizontal dual-lens camera suite at the top with the flash above.

My review unit is navy, but you can also get this phone in classic black, pink, or silver.

Switching from the Moto G7, I found the Sony Xperia 10 much more comfortable to use one-handed. Put them side by side and they look like Laurel and Hardy.

You get a 6-inch IPS LCD screen with the Xperia 10 and, because of that 21:9 aspect ratio, it has a resolution of 2,520 x 1,080 pixels. It’s slightly sharper than both the Nokia 7.1 and the Moto G7. That aspect ratio coupled with Sony’s video processing know-how makes it ideal for watching movies, which are generally filmed at 21:9. Though it’s worth noting that TV shows and some other content will have black bars at the sides.

The screen is one of the highlights of this phone and I found that the aspect ratio worked well for reading on the web, as well as for movies and gaming. The contrast is good, and it’s plenty bright for outdoors legibility. There’s a Super-vivid mode in the display settings if you prefer a saturated look, but the colors are vibrant enough out of the box. Until OLED screens start coming to budget phones, this is as about as good a screen as you’ll find in this price category.

Before moving on from the design section, a quick word on the vibration motor. It seems like an odd thing to highlight, but the vibrate function in the Xperia 10 is terrible. When I first turned the phone on, I was concerned it had been damaged in transit because of the asthmatic vibrate on start up. It’s obviously an area where Sony economized.

The Sony Xperia 10 has a Qualcomm Snapdragon 630 processor inside with 3GB of RAM. This processor is getting a bit long in the tooth and it shows. While swiping around feels slick, there are noticeably long pauses when loading games and switching between apps. The camera app also froze on me a couple of times.

I played Plants vs. Zombies: Heroes and it ran without issues. PUBG:Mobile took forever to load, but it ran without a problem, albeit on the lowest quality graphical setting. If you want to play demanding games, then the Xperia 10 is not for you.

Both the major competitors for the Xperia 10 — the Nokia 7.1 and Moto G7 — have slightly newer, more powerful processors, and an extra 1GB of RAM, and you can feel the difference it makes. Here are some benchmark results:

It’s clear to see that the Sony Xperia 10 is lagging a bit here, apart from the 3DMark benchmark where it did quite well. Regardless, Sony should have beefed up the hardware here just a bit.

But if you don’t use demanding apps or play a lot of games, this might not be a major concern. For general web browsing, messaging, movie watching and a spot of casual gaming, the Sony Xperia 10 will serve you well.

There’s an ample 64GB of storage available and you can always insert a MicroSD card into the phone to expand that capacity.

The Xperia 10 runs Android 9 Pie with Sony’s user interface on top and a handful of preinstalled apps. My review unit came with stalwarts like Netflix and Facebook, alongside Sony apps like Xperia Lounge, but the apps you’ll find on yours depends on where you live and where you buy your phone from.

It feels a lot like stock Android in terms of basic navigation; there are a few extra settings in the menus, but it’s easy to get to grips with. I can’t help feeling things like the Gallery app are redundant when you have Google Photos, but I didn’t encounter too much bloatware here.

While the Xperia 10 feels pretty slick in the software department — and Sony has a decent record for updating its phones — I would prefer to see the company adopt Android One like Nokia does with its budget devices. Android One phones are guaranteed to get at least two years of Android version updates and three years of security updates, and that’s a big benefit in a budget phone.

I’m glad to report that the Sony Xperia 10 does come with NFC support, so you can share via Android Beam and make wireless payments with Google Pay if needed.

The Sony Xperia 10 has a dual-lens camera, pairing a 13-megapixel sensor with an f/2.0 aperture and a secondary 5-megapixel depth sensor. The camera app itself is a little slow, along with a slow shutter speed, and slow image processing, but you can snap some lovely shots.

When the sun is out, you’ll have no trouble capturing good photos with the Xperia 10. The colors are vibrant without straying too far from how the scene really looked, and it captures plenty of detail. You can definitely get better results if you go into manual mode and tweak the settings, but all the photos in this review were taken with the automatic settings.

Like the Moto G7, I found the Xperia 10 camera struggles with contrast sometimes and overexposes light areas, but it doesn’t seem to be quite as bad. Low light is a major weakness for both phones, and you’ll see a lot of noise creep in as soon as the light begins to fade.

One area where the Moto G7 camera beats the Xperia 10 is portraits of people with that coveted bokeh effect that blurs the background. Sony has a bokeh mode option in the camera app, but I really didn’t get on well with it. Repeated instructions to move further away from the subject or move closer for that elusive sweet spot became tiring. Occasionally the results were good, but I preferred the photos of people I took with the standard photo mode.

There is a risk of blurry photos because, like every other budget phone camera, it lacks optical image stabilization (OIS). If you don’t have a steady hand or a steady subject, then photos are not going to come out well.

There is also a selfie portrait mode which employs the 8-megapixel front-facing camera and it’s actually much easier to use than the bokeh mode on the rear camera.

The Xperia 10 can also capture 4K videos at 30 frames per second in the 21:9 aspect ratio if you fancy developing a cinematic look for your home movies. It will also shoot Full HD at 60 frames per second, but I recommend going with the default Full HD at 30 fps, because it enables object tracking and SteadyShot image stabilization.

Although it has a sizable 2,870mAh battery inside, stamina is a definite weakness for the Xperia 10. On an average day the phone struggled to make it to bedtime with anything left in the tank. A single game of PUBG: Mobile chewed through 11 percent of the battery. If you want to watch video, play games, and take a lot of photos with this phone, then you’ll need to carry a portable battery charger with you.

In our battery test, streaming a Full HD video from YouTube, the Xperia 10 lasted just 4 hours and 54 minutes. That’s far from impressive, and a lot less than cheaper budget phones like the Moto G7 and even the Nokia 3.1 Plus.

Wired charging via the USB-C port is fast; I was able to take the battery from zero to 88 percent in an hour. The Xperia 10 supports Qualcomm’s Quick Charge 3.0 standard and USB Power Delivery, which is rare in budget phones. That’s a good thing, because based on my experience, you’re going to be plugging in a lot. There’s no support for wireless charging here.

The Sony Xperia 10 costs $350. You can order it unlocked from Amazon, Best Buy, or B&H and it ships starting March 18. Although you won’t find it at carrier stores, the Xperia 10 will work with AT&T, T-Mobile, and Verizon in the U.S.

It comes with a standard one-year limited warranty which covers defects in design, materials, or workmanship.

The Sony Xperia 10 is a good phone that mostly justifies the $350 price. The display is pleasing, the camera is capable, and I like the design. The trouble is that Sony has compromised in two vital areas: Performance and battery life, and that’s enough to sink any recommendation.

Yes, you can buy the Nokia 7.1 for exactly the same price and it matches or bests the Xperia 10 in every area.

You could also save yourself $50 and go for the Moto G7. There isn’t a big gap between them, and there are things I prefer about the Xperia 10, but at $50 less the Moto G7 is better value for sure.

The other phone you might look at is the Xperia 10 Plus, which costs a fair bit more at $430, but stretches the screen up to 6.5 inches and packs a superior processor and an extra 1GB of RAM.

You should get two years out of the Sony Xperia 10, and we’re hopeful that Sony will update the software as it does have a decent update record. However, you might tire of the slow processor before then.

Since its plastic, it’s likely more durable than a glass phone, but there’s no IP rating for water resistance. It might be worth grabbing a case to protect it.

No. Most people will be better off buying the Nokia 7.1 or the Moto G7. But if you’re a big Sony fan and the flagship Xperia 1 is too rich for your blood, or if movie watching is a big priority for you in a phone, then you’ll enjoy the Xperia 10.