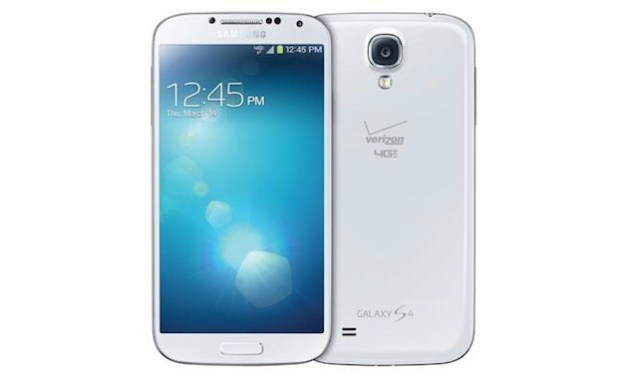 Earlier this week it was confirmed the Samsung Galaxy S4 would be sold by all major networks in the U.S., and while AT&T, T-Mobile and Sprint had all put up pre-order pages, or at least announced when they would start, Verizon had stayed silent. The silence was broken today though, as it not only tweeted that the Galaxy S4 would soon make its debut, but added the picture you see above to whet our appetite.

The tweet says simply, “Samsung Galaxy S4 for Verizon Wireless 4G LTE coming in May. More details soon.” A May release date is similar to most of Verizon’s competition, however if a previous rumor turns out to be accurate, it’s going to be at the tail end of the month. A memo said to originate from Staples put the Verizon Galaxy S4’s arrival on May 30, which would see it lag behind AT&T by around a month.

As for Verizon’s picture of the Galaxy S4, it shows a White Frost model with Verizon 4G LTE branding on the rear, and no alterations to the front panel. One shouldn’t expect an eight-core surprise to be hiding inside Verizon’s S4, as like the rest of the U.S. and much of Europe, the phone will be powered by a 1.9GHz quad-core Snapdragon 600 processor. Otherwise, the spec is the same, meaning it’ll have a 5-inch, 1080p Super AMOLED screen, a 13-megapixel camera, Android 4.2.2, and more special software features than ever before.

There’s no indication on how much Verizon will charge for its Galaxy S4, but $200 with a two-year contract seems to be the usual, although T-Mobile is bucking the trend by offering the S4 at a far more reasonable $150 up front, with 24 monthly payments of $20, all under its new simpler tariff option. Now all we can do is wait for the final details to come through from Verizon, which should be soon.