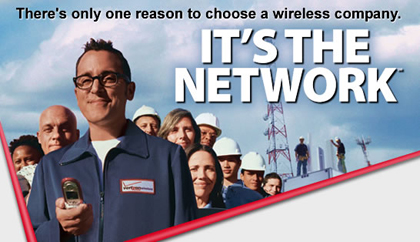 In a memo posted on its website, Verizon Wireless is warning its customers that bandwidth hogs are about to see slower speeds. According to the announcement, “…if you use an extraordinary amount of data and fall within the top 5 percent of Verizon Wireless data users, we may reduce your data throughout speeds periodically for the remainder of your then current and immediately following billing cycle to ensure high quality network performance for others users at locations and time of peak demand.”

Seems like Verizon is prepping for the onslaught of iPhone customers heading to its network, and for good reason. Once AT&T entered into its formerly-exclusive contract with Apple, the carrier’s service went notoriously downhill. Customers, especially those in larger cities, are plagued by dropped calls and painfully slow speeds. AT&T’s network clearly hasn’t been able to single-handedly provide iPhone coverage, at least not up to consumer expectations, and maybe Verizon is trying to preemptively deal with some of the issues its competitor had to along the way. In December of 2009, AT&T started throttling bandwidth by requiring users pushing so much data to pay up with new service plans. It also notably pulled its unlimited data plan.

Despite any attempts to fix problems with its coverage, AT&T continued to have the most dropped calls and customer satisfaction kept right on plummeting. So now, to keep 95 percent of its customer base happy, Verizon is going to learn from AT&T’s iPhone growing pains and institute a limited bandwidth policy right as the device its introduced to its network.

Verizon is also implementing VZOptimization, a system that will “include caching less data, using less capacity, and sizing the video more appropriately for the device. The optimization process is agnostic to the content itself, and to the website that provides it. While we invest much effort to avoid changing text, image, and video files in the compression process and while any change to the file is likely to be indiscernible, the optimization process may minimally impact the appearance of the file as displayed on your device.” We’ll know soon enough if the changes will keep Verizon in the good graces of its 94 million customers.