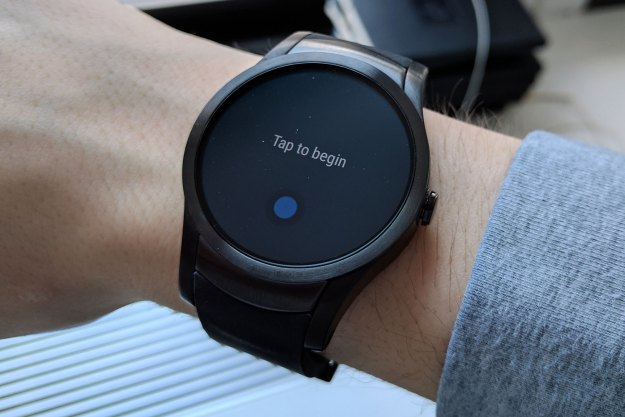 “Verizon's Wear24 isn't the worst smartwatch out there, but odd omissions and a princely price make it tough to recommend.”

Smartwatches, the Dick Tracy-inspired gadgets that track your workouts and buzz when you get a text message, are a little more commonplace than they were a few years ago. Now, there’s a smartwatch at every price point, with luxury Swiss brands like Movado and Tag Heuer filling out the high end and ZTE, Misfit, LG, Huawei, and others sitting somewhere in the middle.

Given the well-established competition, it’s a little surprising that Verizon, the U.S.’s largest cellular carrier, is jumping on the smartwatch bandwagon. The Wear24, a watch made in partnership with Taiwanese company ODM Quanta, boasts high-end hardware in a lightweight, $300 package. It’s got a waterproof body, a colorful display, and 4G LTE connectivity.

Despite that laundry list of features, Verizon’s Wear24 falls short in crucial respects. Namely, it omits sensors the competition doesn’t. That’s not to say Verizon’s first attempt at a smartwatch isn’t good, but it’s tough to recommend the Wear24 over similarly-priced watches from Apple, Huawei, Samsung, and others.

The Wear24 is round and compact, and elegant — there’s a single physical button on the side, and lugs that protrude a little too much. It’s a little heavy, but on the whole, the Wear24 is minimal — if a little bland.

It’s IP67 rated for water- and dust-resistance, meaning it’ll emerge unscathed from watery depths up to 3 feet, and packs a 1.39-inch, AMOLED touchscreen with a resolution of 400 x 400 pixels. It’s powered by Qualcomm’s Snapdragon Wear 2100 processor, like most Android Wear smartwatches, and it comes with 768MB of RAM, 4GB of internal storage, and a 450mAh battery that supports wireless charging.

It’s fast, too. The Wear24 flew through Android Wear 2.0’s menus in our testing, never once showing signs of slowdown in the course of a long work week using Google’s activity-tracking Fit software, turn-by-turn Google Maps directions, and a deluge of Trello, Facebook Messenger, and email notifications running in the background.

On the whole, the Wear24 is tastefully — if a little blandly — designed.

Our testing didn’t seem to make a dent in the Wear24’s battery. Despite the battery’s comparatively smaller, 450mAh size (the cheaper ZTE Quartz packs a 500mAh), the Wear24 tended to last about a day and a half on a charge. Even with Wi-Fi and LTE enabled and the brightness cranked to maximum, we struggled to run the Wear24’s battery down below 25 percent. That’s much better than we managed with the LG Watch Sport, which frequently fell short of the 20-hour mark, and it’s on par with the Apple Watch and Samsung Gear S3, both of which last about a day.

On the subject of the Wear24’s battery, we found the charger — a wireless dock that comes packed in the box and plugs in via MicroUSB cable — to be a nice touch. It’s much easier to use than the Huawei Watch 2’s finicky magnets, and a lot less finicky than the ZTE Quartz’s clip-on charger.

The Wear24 is one of the few Android Wear smartwatches to support 4G LTE. In real-world terms, that means you can use it in lieu of your smartphone — Android Wear 2.0’s native calling features let you answer and place calls with your cellphone plan’s number, or respond to incoming texts.

You can dictate messages or tap text out letter-by-letter on Android Wear 2.0’s tiny keyboard. Alternatively, a nifty handwriting tool turns the letters you doodle with a finger into text.

There’s also Smart Replies, which uses on-device machine learning to generate short, contextually relevant message replies. When you get a text message from a friend asking if you’re free this evening, for example, you’ll get options like, “Sounds good,” or, “Can’t make it.”

Mobile data doesn’t come free, of course — adding the Wear24 to an existing Verizon data plan is $5 a month. But if you’re the kind of watch wearer who appreciates the freedom of being able to ditch your smartphone when heading to the grocery store or go for a jog, the convenience might be worth the cost.

The lack of an ambient light sensor means it won’t adjust the brightness automatically.

That said, we were disappointed by the Wear24’s speaker quality, which tended to sound tinny and washed out. The speaker comes in handy on those rare occasions when you aren’t wearing earbuds and your smartphone’s out of reach, and we would’ve liked to see more attention paid to it for that reason.

The Wear24 isn’t without other drawbacks. The screen is less sharp than the Huawei Watch 2’s display (290 ppi versus 326 ppi); its body has a lower IP rating than the Samsung Gear S3 and the LG Watch Sport (IP67 versus IP68); and it doesn’t have removable wrist straps, meaning you’re stuck with the thin, flimsy silicon bands that come permanently bolted to it.

While it has GPS, the Wear24 doesn’t have a heart-rate sensor — so you won’t be able to track fitness activities more accurately, unlike comparably-priced watches. The lack of an ambient light sensor means it won’t adjust the brightness automatically, and it does feature Near Field Communication (NFC) radio, but it doesn’t support Android Pay. The LG Watch Sport, Huawei Watch, and Moto 360 use NFC to let you tap to pay at retailers that accept Android Pay, Google’s payments platform, but the Wear24 inexplicably doesn’t.

The Wear24 is one of the first smartwatches to ship with Android Wear 2.0, the latest version of Google’s smartwatch operating system. That’s a good thing, because it’s a huge improvement over its predecessor.

In contrast to the first version of Android Wear, which we found to be a little clunky and confusing, Android Wear 2.0’s interface is fast, intuitive, and simple. Swiping down from the top of the watch brings up quick settings, and swiping up scrolls through your notifications.

The watch face options are improved as well. Apple Watch-like Complications — animated widgets for watch apps — show updates and notifications in real time. By default, the Wear24 offers the choice of a battery indicator, step counter, and weekday planner, but third-party apps add their own Complications. Swiping left lets you customize the layout and appearance of Complications, or swap watch faces entirely.

The Wear24 misses out on one new feature of Android Wear 2.0 — hardware shortcuts. Unlike the LG Watch Sport, which has a rotating dial that serves as a scroll wheel or zoom adjustment in Android Wear apps, the Wear24’s inputs are pretty much restricted to touch. Short of pressing the crown to access apps and the Google Assistant, most interactions are of the tapping and swiping variety.

The Wear24, unsurprisingly, ships preloaded with Verizon’s Messaging app, which handles texting on the watch and phone. It’s optional — you can use Android Wear 2.0’s default messaging app, if you choose — but Verizon’s app helpfully dismisses text message notifications on your phone if you’ve viewed them on your watch, and vice versa. That said, it also encourages you to purchase in-app stickers, which is why we recommend avoiding it.

Verizon offers a standard 12-month limited warranty on the Wear24, which protects against defects in material and workmanship under normal use and service. If you’re claim is approved, the carrier will repair your damaged Wear24 using new or refurbished parts. It doesn’t cover moisture damage, “unauthorized” modifications, damage caused in shipping, or Wear24 devices purchased from unauthorized third parties.

The Verizon Wear24 is available from Verizon for $350 unlocked, or $300  on a two-year contract. It comes in steel, black and rose gold, and is available on Verizon’s website and brick-and-mortar stores.

Verizon’s Wear24 is a pretty good smartwatch, but it needs to be cheaper. At $300 on a two-year contract, and $350 unlocked, it’s just not good enough to justify the asking price. The competition has sharper screens, heart-rate tracking features, ambient light sensors, Android Pay support, and more. The Wear24 handles Android Wear basics, like notifications, messaging, and watch faces, just fine. But its princely price makes it hard to recommend.

Yes. The ZTE Quartz, which is admittedly bigger and bulkier than the Wear24, is a good deal less expensive at $192. The LG Watch Style is a close second, but it’s $50 more.

If you’re the uncompromising type, consider the Huawei Watch 2 Sport or the LG Watch Sport for their better screens, heart-rate monitors, and NFC sensors that support Android Pay. The former, unlike the Wear24, doesn’t support 4G LTE, but it’s cheaper than the unlocked Wear24 at $300.

The Wear24 is Verizon’s first Android Wear smartwatch, so it’s a little difficult to tell how long the carrier will support it. But if other Android Wear devices are any indication, we expect it to receive updates for at least 2 years.

No. Simply put, the Wear24 is an expensive smartwatch with deal-breaking shortcomings — namely, the lack of heart-rate monitor and support for Android Pay. There are far more competitive options at its $300 to $350 price range.

Update: Sales of the Wear24 have been discontinued.