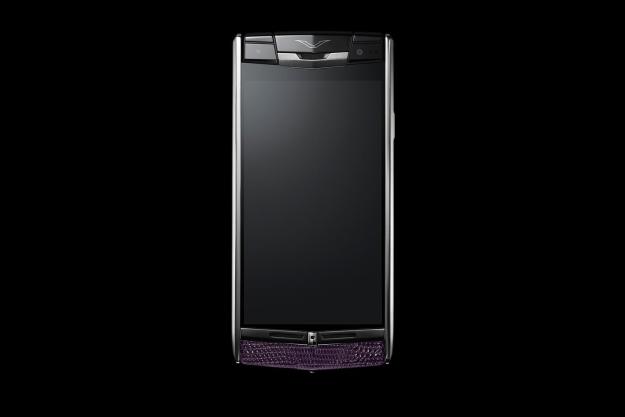 “It’s the best Vertu phone yet, with incredible build quality, a slick design, and up-to-date specs. It’s still a pricey little thing though, and most of us will have to admire it from afar.”

Following the split from Nokia two years ago, Vertu came back with the TI, a striking device that demonstrated how the company was evolving. It was followed up by the Constellation, a far less visually challenging smartphone with more consumer appeal.

The third phone from the newly invigorated Vertu is the Signature Touch. It combines several design flourishes from both the TI and the Constellation, with a more modern look, and matches them with some high-end technical specifications.

It is, when described that way, the perfect flagship phone. It’s prettier than the TI, more capable than the Constellation, and still stays true to its heritage ensuring it’s recognizable as a Vertu smartphone. Vertu’s really proud of this one, so let’s find out if it’s justified.

The Signature Touch is hand built in England, made from grade 5 titanium, and the chassis is covered in your choice of leather. It’s immediately obvious that Vertu has calmed the design down from the Vertu TI. The titanium side panels are now smooth, and broken up only by tiny screws and precision crafted buttons.

Experience pays off when dealing with sapphire crystal, and the glass on the Signature Touch is truly beautiful.

A 5.1-inch piece of fifth-generation sapphire crystal covers the 4.7-inch display. It’s almost impossible to scratch, and extremely strong. We’ve been hearing a lot about sapphire crystal recently, and Vertu has been using it for more than a decade. Experience pays off when dealing with such a fickle material, and the glass on the Signature Touch is truly beautiful.

Real thought has been put into the way the phone feels when you hold it. The leather stretches round the sides just enough to cushion the device in your palm, while your fingers naturally grip the titanium edging. It’s cool to the touch, but never slippery, and pleasing to cradle in your hand, so much so that I’d often find myself absentmindedly running my fingers over the leather and titanium.

The leather on our phone is an option called Damson Lizard, which gave the body more texture than the smoother Jet or Claret leather. We’re often told leather only improves with age, and for once, this isn’t just marketing guff. I got the chance to see a six-month old Signature Touch in Claret leather, and it had taken on a deeper, richer tone that only made it look classier.

All this encouraged me not to wrap the Vertu up in a case, because not only will exposing it to the air make it look better over time, but also because this is far from a delicate phone. It feels almost indestructible, although I’m sure it’s not, and throwing it into my bag came more naturally than it did with an iPhone or any other Android smartphone. I simply didn’t expect it to suffer any damage due to the materials used in its construction. At 192 grams, the Signature Touch isn’t light, but it never feels too heavy, just solidly built.

Perhaps more so than other Vertu model, the Signature Touch leaves the impression of a being a lovingly engineered, hand built, top quality piece of technology that’s made to last. Everything else just feels like a toy.

If forced to come up with a negative point, the spring loaded SIM card door on the rear of the phone didn’t sit flush. It was like the spring hadn’t been adjusted correctly, and you could press it down in one corner. However, knowing Vertu’s attention to detail, I’d be surprised if it was anything other than an idiosyncrasy of the test phone.

Android 4.4 close to stock, but can be buggy

The Signature Touch runs Android 4.4, with almost no interference from Vertu, aside from a selection of pre-installed apps. Concierge, the 24/7 personal assistant — a real person, none of this virtual nonsense — is standard and free for a year, along with Vertu Life for exclusive offers, and Vertu Certainty for security services, and access to secure email/calls.

There are a few unwelcome additions, including a pointless About Vertu app with videos showing what makes the phone special. Along with apps recommended by Vertu. They can be removed from the Home screen, but not deleted from the device.

While these wouldn’t be missed, the 3D analog clock with gyroscopically controlled shading is very cool, and the chance to add wallpaper that matches the phone’s leather is even better. Like other Vertu phones, the ringtones and alerts are all custom recorded, and sound fantastic.

During our time with the Signature Touch, a surprising number of small software updates were sent through, sometimes more than once per day, but they did seem to fix a few of the niggles the phone displayed. For example, it wouldn’t always stay connected to our Pebble smartwatch, and on more than one occasion, stopped Runkeeper from tracking a run. The camera app was also temperamental, sometimes getting very confused after we dug around in the menu.

When it was behaving, which was 98 percent of the time, it was super smooth, and as fast as any other top-end smartphone.

Most capable Vertu smartphone yet

Vertu has used a Qualcomm Snapdragon 800 processor running at 2.3GHz to power the Signature Touch. It’s the same chip used in the majority of flagship phones from late 2013, and naturally, performance on the phone is excellent. It’s not noticeably slower than the Snapdragon 801-powered LG G3, and it made a fine games machine, handling Contra Evolution and (shudder) Kim Kardashian: Hollywood perfectly.

It’s by far Vertu’s most attractively designed smartphone, and it’s a real joy to pick up and hold.

The screen measures 4.7-inches and it has a 1080p resolution, giving an impressive 473ppi pixel density. Viewing it in direct sunlight can be a pain, but with the brightness turned right up, it’s still legible. A total of 64GB internal storage space is yours to fill, but there’s no memory expansion slot to up this figure any further.

Below the screen you’ll spot a pair of stereo speakers, which come with Dolby’s Digital Plus software enhancements, and they sound glorious. Putting them up against the LG G3’s loud 1 watt speaker, the Vertu sounded controlled and precise, while the G3 was more raucous. The impressive audio isn’t relegated to music either, and phone calls sound crisp and super clear, a trait carried over from the original Signature phones produced by Vertu several years ago.

It’s also the first Vertu phone to come with 4G LTE connectivity, and thanks to supporting a wide range of bandwidths, it’ll work pretty much anywhere you take it in the world.

Equipped with a 13-megapixel camera, the Signature Touch is perfectly capable of taking good pictures. Vertu has collaborated with camera legends Hasselblad on the software, but there’s little evidence of their involvement. Images taken outside in the sunshine are rich and full of color, but could appear washed out if shooting too close to the light source. Low light pictures inside are acceptable, but there’s no image stabilization, making a steady hand, or patience to take multiple shots, essential.

You wouldn’t be disappointed with any photos you took with the Signature Touch, but you’d probably not be blown away either. Some phones, the G3 and the S5 for example, can produce images which make you say “wow,” but that’s unlikely to happen with the Signature Touch. The camera has an HDR mode, a panorama setting, and can shoot 1080p video. Around the front is a 2.1-megapixel video call camera.

Vertu phones have often suffered with low standby times, and while the Signature Touch still won’t last a whole day under heavy use, it’s an improvement over the TI. Again, comparing it to the LG G3 – which also can’t keep up if you use it hard – it had enough juice to keep going for a few hours longer, primarily due to the smaller, lower resolution screen. If the phone used the new Qualcomm Snapdragon 801 processor, it’s battery life could be up to 40 percent better and on par with the best devices available.

The best Vertu phone to date

The Signature Touch is a very interesting device. It’s by far Vertu’s most attractively designed smartphone, and it’s a real joy to pick up, hold, and for the most part, operate. There’s something so pleasing about its solidity, the way it thunks down on a table. It has real heft, making it feel like no other smartphone on the market. Even the metal-bodied HTC One M8 can’t compete.

As a piece of engineering, or even a piece of art, it’s nothing short of brilliant. Because of this, forming an emotional connection to the Signature Touch is a real possibility, just like a much-loved item of jewelry or a favorite watch. It’s something I’ve felt with every Vertu phone I’ve used, but it was stronger with the Signature Touch, thanks to the comfort of knowing its vastly improved specification could handle anything I asked of it.

No, it still can’t match the 2014 flagship Android phones, but it’s up there with those released in late 2013, and if we’re all honest, that’s more than enough power and ability for 90 percent of smartphone owners.

Despite all this, it’s still impossible to justify the whopping price tag – it starts at £6,750 ($11,500) — but then, that’s not the point. If you’re worried about money, then you buy a phone that’s within your budget. If money is no object, and you’d prefer something more exclusive that matches your car, tailored suit, and watch, then the Vertu makes sense.

If you’re in that enviable situation, then the Signature Touch is the best phone Vertu has produced to date, making it very easy to recommend.

Topics
Video-editing app LumaFusion to get a Galaxy Tab S8 launch
The best Android phones in 2022: Samsung, Google, and more
Best stylus for tablets and computers: Top pens for note-takers and artists
The best smartwatches for 2022: Apple Watch Series 8, Galaxy Watch 5, and more
The best Samsung Galaxy S21 Ultra screen protectors
Fitbit Cyber Monday Deals: Save on Sense 2, Charge 5, and Versa 2
5 Apple gadgets you really should avoid this holiday season
You won’t believe how cheap this iPad is, thanks to Cyber Monday
How 2023 could bring Google’s best and most ambitious Pixel lineup yet
You can buy an Apple Watch for $149 for Cyber Monday (seriously)
Fitbit Versa 4 Cyber Monday deal drops the smartwatch to $150
Cyber Monday is your last chance to get an iPhone for $99
Even the Apple AirTag is discounted for Cyber Monday 2022