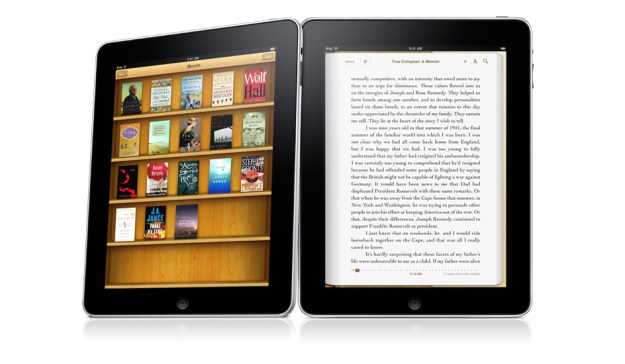 In more bad news for print books, a library in Wisconsin has begun a program to lend out iPads. The program is the first of its kind in the country and will allow patrons to check out first generation Apple tablets, each loaded with 1,000 e-book titles, 10 audio books and various free apps.

With the Kindle Library Lending feature, Amazon has already made it possible for those with Kindle readers to borrow e-books at thousands of libraries across the United States. However, the Eau Claire, Wisc., library is going a step further to allow access to the latest technology for those without the money to spend on a tablet.

Eau Claire’s L.E. Phillips Memorial Public Library has a plan to have 32 iPads available for checkout, and six for library use in the next week. Patrons will be allowed to take the iPads home for seven days, and will have to sign a contract to take them off the premises. Ipads used in the library will have a 4-hour limit.

“The goal of the iPads program is to first introduce our customers to a new technology they haven’t used,” library director John Stoneberg said. “Since we are the first public library, if not the first library in the United States to lend out iPads, it’s been a challenge but it’s been exciting.”

Of course, with great technology comes great expense. The Presto Foundation helped fund the purchase of the iPads with a $50,000 grant. Only patrons owing less than $10 will be allowed to check out a device. Late fees will be $10 daily, and $25 dollars gets charged if the iPad is tossed into a book drop. Oh, and breaking an iPad? Patrons could be paying up to $1020. Don’t break the iPads.

Via All Things Digital

Video-editing app LumaFusion to get a Galaxy Tab S8 launch
Best Cyber Monday iPad Deals: iPad Air, iPad Pro, iPad Mini
Don’t buy the wrong iPad during Cyber Monday — get this one instead
Why a Kindle Paperwhite is the best $100 you can spend on Cyber Monday
You won’t believe how cheap this iPad is, thanks to Cyber Monday
Samsung Galaxy S23: release date, specs, price, and all other rumors
4 tech collabs we want to see on the OnePlus Featuring co-creation platform
Save up to $350 on the Samsung Galaxy Z Fold 4, Z Flip 4
Forget Apple’s newest iPad — the Galaxy Tab S8 should be your next tablet
The iPhone 14 Pro’s Dynamic Island needs to get a lot more useful, fast
OnePlus 11’s controversial design returns in new ‘official’ renders
Update your Google Pixel 7 now for three big security and audio features
The Nothing Phone is finally coming to the U.S., and I can’t wait