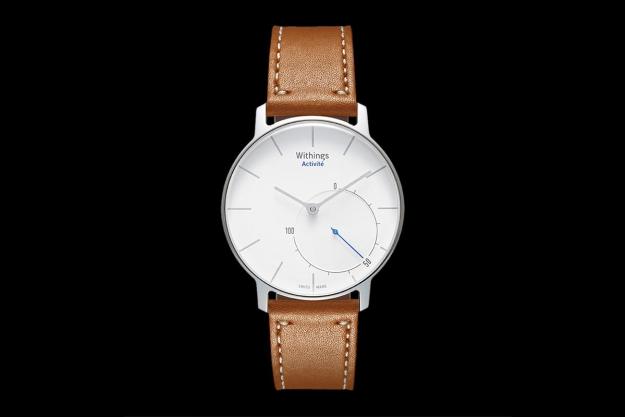 “Withings Activite is an amazing fitness tracker and the most beautiful smart watch we’ve ever worn.”

The watch has existed in some form since the 1600’s, and since the digital wristwatch came about, it really hasn’t changed much – until now. Smartwatches and fitness trackers are pushing normal timepieces forward into a new era. While big technology companies struggle to marry form and function to create functional and appealing smartwatches, French company Withings decided to go about things differently.

Instead of designing a smartwatch from the ground up, Withings decided to start with a traditional wristwatch and make it smarter. The Activité is the result. Withings’ Activité is a classically beautiful, Swiss-made watch that also tracks activity and sleep patterns. It may look like an ordinary watch, but it has extraordinary powers.

One of the things I most wanted for Christmas was a watch – not a smartwatch, mind you, just an average, ordinary watch. Then I wore the Fitbit Charge for a week and decided fitness trackers are cool and silent alarms are the best idea ever. I was perfectly happy to wear the overlarge Charge until I saw the Withings Activité. This beautiful, Swiss-made watch can do everything the Fitbit Charge does, but it looks a million times (a rough estimate) better doing it.

The Activité is remarkably accurate and beats Fitbit at its own game.

Withings’ Activité looks like the fancy Miro watch I admired online, but it can also track my steps, calories burned, sleep, and overall activity. The Activité even wakes me gently when I set an alarm. In short, Withings made an amazing fitness tracker and hid it inside the most beautiful watch I’ve ever worn.

Every aspect of the timepiece, down to the creamy white face, shining dials, and 316L stainless steel case, was designed in Le Locle, Switzerland, the village where watchmaking is supposed to have originated. The minimalistic face has dashes instead of numbers to show the time.

There’s also a smaller circle with a subtly grooved background on the right side of the watch face where you can see how close you are to your step goal. It’s marked with small dashes and the numbers 0, 50, and 100 to show your progress. A pretty blue hand moves along this small circle as you move throughout the day.

The watch face is encased in domed sapphire glass to avoid scratches and measures just 1.3-inches across. It’s the perfect size for any wrist, and I was relieved to see that it looked beautiful on my exceptionally slender one. The glass dome is also responsive, so when I double tapped on the watch face, the hands sprung round to show the time of my next alarm.

To complete the gorgeous, traditional design, Withings offers two straps for every Activité that ships. My review unit came with a lovely caramel colored strap made of butter smooth French-tanned calf leather and a gray silicon strap for exercise. You can easily change straps, thanks to Withings’ quick release spring bar design.

Although those with larger wrists may complain that the straps are too small, I still had to wear mine on the second to last hole. Those with average to medium-sized wrists will have no problem with the strap. Withings also offers an Activité with a black face, orange accents, and black strap for those who aren’t keen on the white, blue, and caramel combination.

Easy to activate, effortless to use

Once you’re done ogling the Activité, you simply download the HealthMate app for iOS or Android and turn on Bluetooth to get started. You then use Withings tool to touch the reset button on the back of the device to start the watch up. The hands will move for a minute, and then the app will prompt you to spin the hands on the screen to adjust the dials. Once you move the dials to 12:00, the watch will set the time itself, based on the time zone of your smartphone. The time zone will also change automatically when you travel.

Philips CR2025 batteries 10 pack ($6)
Although Withings gives you a spare battery for the Activité, which should last 8 months, you may want to stock up on batteries now before you forget.

Once the time is set, you simply set up your HealthMate account with the basics: gender, birth date, height, and weight. You can ask the app to send you reminders to eat fruit, drink water, and other healthy habits, but these notifications will go to the phone, not the watch. After that, you never have to put any information into the app again, with the exception of the silent alarm, which you can easily set for the same time each day.

Withings expects that you’ll wear the Activité 24/7 to track your every step, any swimming you may do, and the quality of your sleep. The Activité seemed to count my steps with greater accuracy than the Fitbit Charge I wore for a week. Withings says its exceptional accuracy is all thanks to the high-precision MEMS 3-axis accelerometer that’s built into the watch.

The Charge often registers arm motions and gestures as steps, but the Withings watch was more conservative. When I waved my arms around at my desk, the watch didn’t add a single step to my count. Doing the same arm motion with the Charge resulted in 5-10 added steps. The Activité is remarkably accurate and beats Fitbit at its own game.

Withings also made the Activité water proof up to 5 ATM, so you can take it for a swim or wear it in the shower no problem. You’ll need to wear the silicon strap for that though; leather is hardly waterproof. Luckily, changing straps is easy and the gray strap looks just as nice as the leather one.

Wake up slow with the silent alarm

Just like many other fitness trackers, the Withings Activité has a silent alarm that wakes you up with a gentle vibration. Of course, since the watch doesn’t have any buttons, you can’t turn the alarm off when you wake up, so it keeps on buzzing until it decides to stop. If you wake up after the first buzz, the inability to stop the alarm may be annoying, but for now you have to live with it.

Related Links: Withings Aura will wake you up with science

Withings’ algorithms can even tell when you’re in a deep sleep or a light sleep.

Regardless of the unstoppable buzzing, I really enjoyed waking up to the silent, buzzing alarm. It’s a much more peaceful way to meet the day, especially when you have to get up early.

When it comes to tracking your sleep, the Activité is also extremely accurate. While some may find the Activité uncomfortable to sleep with, I had no problem with it.

The watch is so comfortable to wear that I hardly noticed its presence. I even slept with it on every night and found that it tracked my sleep cycle reliably. Withings’ algorithms can even tell when you’re in a deep sleep or a light sleep.

After a few days of use, I saw my sleep patterns begin to emerge and adjusted my alarm accordingly to avoid waking myself from a dead sleep like I had been doing without realizing for years.

A smarter watch that you never have to charge

Perhaps the best thing about the Withings watch is also the most simple: You never have to charge it – ever. Instead of wasting time and space trying to squeeze in a small battery and room for a charging port, Withings decided to do what watch makers have been doing for centuries: pop in a watch battery. The Activité is powered by a CR2025 button cell that should last 8 months. Withings even throws in a second battery for free when you buy the watch and the tool you need to change it. The batteries are also relatively inexpensive. A quick search on Amazon revealed that you can get 10 of them for just $6.

Of course, Withings can use this kind of battery mainly because the Activité’s functions are limited to activity and sleep tracking, and also because there’s no light-up display.

Withings’ Activité is the future of wristwatches: It’s beautiful and it’s smart. It can track your steps with more accuracy than the most popular fitness trackers on the market, monitor your sleep, and wake you up peacefully, all while looking drop-dead gorgeous. It may not be the fully featured smartwatch we’ve all been waiting for, but it sure as hell is the most beautiful fitness tracker we’ve seen so far.

Its price tag of $450 may raise a few eyebrows, but most designer wristwatches cost about the same, if not thousands of dollars more. Not to mention the fact that the Activité also acts as a fitness tracker. Sure, it’s triple the price of many fitness trackers, but it’s a beautiful watch, too, which isn’t something the Fitbits, Misfits, and Jawbones of the world can say.

Obviously, if you’re looking for a fully-fledged smartwatch or a high-powered fitness tracker, you’ll find the Activité pretty limited. However, if you’re like 90 percent of the population and you just want a fabulous watch that happens to be really, really smart at tracking your activity and sleep, Withings’ Activité is just perfect.

Topics
Video-editing app LumaFusion to get a Galaxy Tab S8 launch
Sunbird looks like the iMessage for Android app you’ve been waiting for
The best Samsung Galaxy S22 Ultra screen protectors for 2022
The Galaxy Z Flip 5 might fix the Flip 4’s biggest design flaws
The best Android apps for December 2022
Samsung Galaxy Z Fold 4 is $350 off — no trade-in needed
The best Samsung Galaxy Watch faces for style and utility
We asked the experts if biological sex affects heart rate sensor accuracy
I still love my iPhone 14 Pro, but not for the reason I expected
The best iPhone apps to download in December 2022
Instafest app: How to make your own Spotify festival lineup
How old phones became the cool, good phones in 2022
Don’t listen to billionaires like Elon Musk — app stores are fantastic