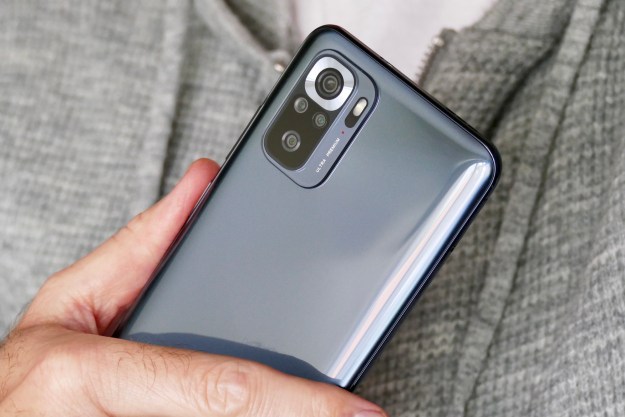 “Temptingly cheap, the Xiaomi Redmi Note 10S gets the basics right, but for a little more money you can buy a phone that will last you longer.”

The Xiaomi Redmi Note 10S is a good smartphone, but it’s also evidence of just how important it is to consider longevity when deciding which model to buy, regardless of the price. Although it’s a strong value when discounted, as it is when this review was written, at full price you can get a better, longer-lasting 5G phone for not much more money.

may not be for you today, but it may be tomorrow, and you’d have to upgrade from the Redmi Note 10S to get it. I’ve spent some quality time with the phone to discover if it’s worth taking the risk.

The Redmi Note 10S has a plastic frame and a plastic rear panel, with Gorilla Glass over the screen, plus an IP53 splash and dust resistance rating. The 6.43-inch AMOLED screen is flat while the rear is slightly curved, and the whole thing weighs 178 grams and is 8.3mm thick. There’s a fingerprint scanner in the power key on the side of the phone, a 3.5mm headphone jack on the bottom, and four cameras in the module on the back.

It’s not a remarkable-looking smartphone, but it’s far from unattractive with a few standout design touches I really like, such as the use of clear plastic for the camera module which makes it appear slimmer. The plastic body provides grip and adds lightness, plus it’s comfortable to hold for extended periods of time, but it does get covered in messy fingerprints — on the front and the back — and the back panel has some unpleasant flex to it when pressed.

This is why the Redmi Note 10S is so price-sensitive. It’s obviously not a premium , but it edges awfully close to being a little too cheap. No one really wants to pay much for a phone that sounds hollow when tapped, and the Redmi Note 10S does. It is a low-cost built on a budget, but this won’t matter too much if you can secure one for a low price.

The main camera has 64-megapixels and an f/1.8 aperture, plus Phase Detection Autofocus, and it’s alongside an 8MP, f/2.2 wide-angle camera, plus a 2MP depth and 2MP macro camera. It’s not bad. In good outdoor conditions, it takes well-balanced photos with a lovely splash of color, provided you’re careful with the “AI” mode. Sometimes it can really enhance a picture, but in other situations it can heavy-handedly up the color, boost the contrast, and process the image to where it doesn’t look natural. It’s a gamble which one you get, unfortunately.

In more difficult lighting the camera’s white balance suffers, and stormy clouds turn more blue than grey or black. Outdoor shots also lose some visual excitement and detail when the ambient light is low. The Portrait mode is effective and edge recognition is good. The selfie camera has a degree of beautification active by default, so it lightens and smooths your skin, but it can be deactivated easily.

If you can get the Redmi Note 10S at the right price the camera won’t disappoint, but spend just a little more and you can get phones with much better cameras.

Xiaomi chose MediaTek as its partner on the Redmi Note 10S, but it didn’t opt for a Dimensity chip to add . Instead, the phone uses a MediaTek Helio G95 octa-core chip with either 6GB or 8GB of . My review model has 6GB of . Using the phone for general purposes, like Twitter and Instagram, web browsing, some YouTube, and casual games it’s fine and doesn’t get hot or suffer from slowdown.

I have played a lot of Asphalt 9: Legends during my time with the phone. I didn’t alter the default graphics settings and saw only the very occasional pause during the action. It never became bothersome, and the phone never became too hot. It’s a great little phone for casual gaming.

I like the 2400 x 1080 AMOLED screen and the video experience too. It’s bright enough that I haven’t had issues seeing it outside in sunlight, although I do miss a high refresh rate. There are stereo speakers on the phone too, making watching video way more fun than you often find on phones at this price, but they don’t provide much bass.

There’s no onboard, which does affect the longevity of the phone as while you may not want the fast data connection now, you may next year. It does have NFC for Google Pay and dual-SIM support, plus a microSD card slot too. I also like the fingerprint sensor, which is well placed in the power key and quick to respond.

The phone has Android 11 with Xiaomi’s MIUI 12.5.2 interface over the top. It comes with Google Play and all the usual Google services, plus a variety of Xiaomi’s own apps such as a calculator, a QR code scanner, a file manager, and the Mi Store app store. It’s identical in looks to the version on Xiaomi’s more expensive phones like the Mi 11 Ultra, and it runs smoothly and stably here. It’s customizable, the notifications can be interacted with in the notification shade, and I’ve found it to be reliable.

There are some annoyances though. The Always-on screen isn’t always on at all, no matter what settings I use, and instead lights up when a notification arrives or with a double-tap of the screen. The Dark Mode is haphazard with app support, resulting in some apps not displaying properly, and I dislike the way it dims the wallpaper by default too, as it makes the phone dull to look at.

The Always-on screen isn’t always on at all, no matter what settings I use

None of these things are really unique to the Redmi Note 10S and affect all MIUI phones. Version 12.5 installed on the Redmi Note 10S does seem to have improved energy efficiency though, and many of the pre-installed apps can be either hidden or uninstalled, something not always available in previous versions of MIUI. I never mind using MIUI as I expect these idiosyncrasies, but Xiaomi’s software is still less enjoyable to use than Samsung’s One UI and OnePlus’s OxygenOS.

Turning the Redmi Note 10S off overnight saw the 5,000mAh battery last for three days with general use, and that includes using the camera, social networking, a video call and a few voice calls, and other basic phone tasks. Use the phone more heavily and it’ll still last two days without a problem. The battery life is a real strong point, but high-intensity tasks can drain it quickly. An hour of YouTube video at high resolution takes at least 15% of the battery life, for example.

A 33W fast charger is included in the box, which Xiaomi claims delivers 54% of charge in 30 minutes.

The Xiaomi Redmi Note 10S is not officially sold in the U.S. but can be imported. It’s available now through Xiaomi’s official online store in the U.K., where at full price it costs 229 British pounds, which is about $320. However, at the time of writing it’s discounted to 179 pounds, or about $250.

If you can get the Xiaomi Redmi Note 10S for the lowest price, it’s a good value for people who won’t be demanding too much of it, or have any expectation to use . It delivers strong performance for your money, with a good screen and long and battery life. The MediaTek Helio G95 processor isn’t the newest, but it’s powerful enough for everyday use and for casual gaming too. Even the camera is acceptable in the right conditions.

It delivers strong performance for your money, with a good screen and long and battery life

However, the lack of is a problem. Cheap 5G phones are plentiful today, and they don’t all cost much more than the Redmi Note 10S. You may not be able to get in your area today, but you may next month or next year, and upgrading your phone to get it at that time isn’t necessary if you choose wisely today. If you can afford to get (or have the time to save a little more) a phone now, it will absolutely be worth it in the long run, and that takes the Redmi Note 10S out of the running.

In the U.K. we’d recommend spending a little more to get the OnePlus Nord CE 5G, which costs 299 pounds. The software is better, it comes with for the future, has IP67 water resistance, and is equal to, or better than, the Redmi Note 10S in most other areas too. Also, take a look at the Realme 8 5G, which also has from MediaTek’s Dimensity 700 chip, and costs 200 pounds.

The plastic body and IP53 splash and dust resistance rating should give the Redmi Note 10S a strong chance of surviving some moderately rough treatment. This is a 4G LTE phone and does not come with a modem, which means if you want to try the fast data connection in the future you will have to change your phone.

No. You can get a phone with better software, and that will last longer, by spending just a little more money.