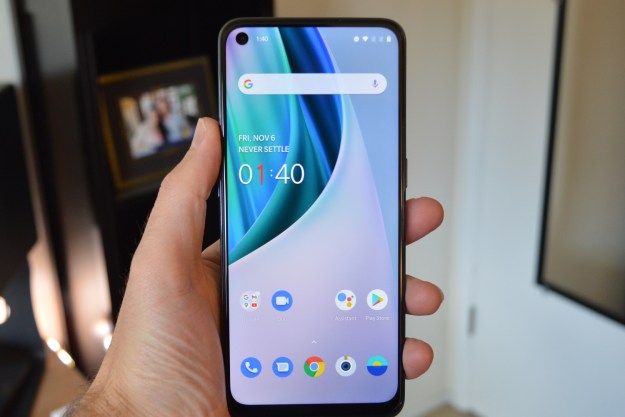 OnePlus has long been the bastion of value-for-money in the Android world, but as its flagship phones creep up in price, more room has been made for lower-cost devices that still offer some great features. The original OnePlus Nord exemplified this, with a solid design and good battery life. Now, OnePlus is expanding the series — with the new OnePlus Nord N10 5G.

The new device is currently only available in Europe and the U.K., however OnePlus says that it will be bringing it, along with the also-new OnePlus Nord N100, to North America soon. At 329 British pounds it’s still not a cheap phone, but definitely budget conscious. Should you buy it? We put the OnePlus Nord N10 5G to the test to find out.

Editor’s Note: Because the Nord N10 5G is available in Europe first, we were sent a European model to test. Testing in the U.S., the phone has technical limitations around 5G bands and other network technology. The North American model should not run into any of these issues.

Midrange phones have been getting a whole lot better, and many of the best midrange devices now offer a modern design with an edge to edge display. The OnePlus Nord N10 5G is no exception to that rule. The display has nicely rounded corners, there’s a (relatively large) hole-punch cutout for the front-facing camera on the top left of the display, and so on. The only thing that breaks the illusion is a large chin at the bottom of the display, but it’s certainly not a dealbreaker.

The back of the phone looks very similar to other modern OnePlus devices. There’s a squircle-shaped camera module on the top left of the back of the phone, which houses the quad-lens camera. The only difference, at least in appearance, is the rear-mounted fingerprint sensor, which generally worked well.

Of course, appearance and feel are a little different. The back of the phone looks nice, but it’s built from plastic, and that can be felt. It’s common in phones in this price range, but I would still like to see midrange phones starting to get built from more premium materials.

The phone looks nice, but appearance and feel are different — you know it’s plastic.

Around the edges, you’ll get all the usuals: A USB-C port, a volume rocker, and a power button.  Also on the bottom is a strange hole. After consulting the instructions, I determined that it’s called a “headphone jack.” Weird.

The Nord N10 5G offers a 6.49-inch display with a 1080p resolution and it looks good. No, it’s not a high-end 1440p display, but at least it’s a 90Hz high refresh rate display. It gets bright enough to use even in direct sunlight, it offers relatively vivid colors, and for most, it’s more than good enough.

The OnePlus Nord N10 5G offers a Qualcomm Snapdragon 690 processor, coupled with 6GB of RAM and 128GB of storage. It’s not a bad lineup of specs, and in fact, it’s really nice that the base model comes with 128GB of storage. But there are other phones that feel snappier in the price range. A perfect example of that is the Google Pixel 4a, which is about the same price, and has a Snapdragon 730G — and the higher-end Pixel 4a 5G, which is admittedly a little pricier, has a Snapdragon 765G. While the standard Pixel 4a won’t beat the OnePlus Nord 10 5G in benchmarks, Google’s phones are very responsive in real-world use and more up to date with software.

The limitations of the phone’s performance can be felt at times. Sometimes it takes a second or two to load the keyboard, and sometimes when you type, it can skip a beat to actually show the character on the display. Basic operation is relatively smooth most of the time, but it’s the occasions that it’s not smooth that you are reminded you have a budget device.

Benchmark results confirm this. The Nord N10 5G got 281,214 in AnTuTu and 606 single-core, 1,804 multi-core in GeekBench 5. Gaming with the phone is a decent experience. Games take a beat to load, but actual gameplay worked fine in our testing with games like Call of Duty: Mobile and Asphalt 9.

The battery on the phone sits in at 4,300mAh, and it was easily able to deliver a full day of use. That said, I recommend disabling the always-on display on the phone. The OnePlus Nord 10 5G has an LCD panel, and with the display feature enabled, the backlight stays on even when the display is “off.” That can seriously suck battery, and with the feature switched on, I did find that battery was impacted, to the point where I needed to charge the phone before the end of a moderate-use day.

Full-day battery isn’t a problem, and Warp Charge 30T fast charging is a differentiator at this price.

Thankfully, the phone supports OnePlus’ Warp Charge 30T, and it comes with a charger in the box. Since I was shipped the European model of the device, I didn’t test the charger here in the U.S. — however, having tested OnePlus fast charging in the past, it’s likely that the phone will be able to get a majority of its charge back in a matter of around 30 minutes. That’s a differentiator at this price.

The Nord 10 5G also, as the name suggests, supports 5G, thanks to Qualcomm’s new Snapdragon 690 chipset and Snapdragon X51 modem. The result is that you’ll get Sub-6 5G connectivity, but not the superfast mmWave that carriers like Verizon have been touting. That shouldn’t be a big deal for most though — mmWave is barely available, and you really shouldn’t buy or avoid a phone based on mmWave support.

The OnePlus Nord 10 5G offers a quad-lens camera system, but it’s not necessarily as versatile as you might assume. While you would think that among those four lenses there’s a telephoto lens, there unfortunately is not. Instead, you’ll get a 64-megapixel main sensor, an 8MP ultrawide camera, a 5MP depth sensor, and a 2MP macro lens. I really wish OnePlus would do away with the macro lens — it’s useless.

The cameras are fine, but not groundbreaking. This is where the Pixel 4a stands out.

Photos are fine, but not groundbreaking. If you want the best photos on a phone in this price range, you’re better off turning to the Pixel 4a, which has flagship-level image processing.

In general, the phone didn’t deliver as much detail as I would have liked to see. Colors were also a little muted, and not as vibrant as I would normally expect from a 2020 phone. That’s especially true in tricker shooting situations, for example with a bright background and darker foreground. Making sure HDR is on does help in those situations, but it doesn’t completely solve the issue.

The OnePlus Nord 10 5G comes with OnePlus’ OxygenOS 10.5, and it’s a little frustrating to see that it doesn’t come with the latest OxygenOS 11 based on Android 11. That newer software is widely available already, and just sets the Nord N10 5G up for frustration when it comes to longer-term software support. That said, the overall experience of using any modern OnePlus phone is still good, and the OxygenOS Android customization is still simple and easy to navigate.

You’ll get a few extra features too. For example, the phone comes with OnePlus’ Zen mode, which allows you to restrict your own access to your phone for a limited amount of time. Other features include the App Locker, which lets you hide apps behind the fingerprint sensor or a PIN code. Basic theming options make it simple to customize the look of the phone, and OnePlus is particularly good at keeping duplicate apps and bloat to a minimum.

The OnePlus Nord 10 5G is available in Europe and the U.K. for 329 British pounds, which directly translates to about $430 — though I would guess the U.S. price will end up under $400. Eventually, the device will be released in the U.S., however we don’t have a date for it just yet.

The OnePlus Nord 10 5G is a nice phone. It looks good, despite the plastic build, and performs fine, aside from a few instances where performance is a little lackluster. But the main selling point when it comes to the Nord 10 5G versus the competition seems to be its 5G support. And if you’ve read anything we’ve been writing over the past few years, you’ll know that you shouldn’t really buy a phone because it supports 5G.

Still, with on-par performance for the money, a solid display, simple software, and good battery life, if you’re a OnePlus fan that wants a phone in this lower price range, it’s a great option.

If you’re willing to give up 5G support (and really, that’s not a huge loss), then it’s worth getting the Google Pixel 4a instead of the OnePlus Nord 10 5G. The Pixel 4a offers a better camera, and an even more simplified software experience, though it comes at a slightly-higher 350 British pounds.

If you really want 5G support, and can afford to spend a little more, the Pixel 4a 5G is the way to go, though it’s perhaps a full price-bracket higher at 499 British pounds. If you’re feeling really adventurous, it’s worth considering the iPhone SE, which offers better performance than any phone we’ve mentioned and a solid camera, though the design is a little dated.

If you live in the U.K., or somewhere else the OnePlus Nord is available, do consider that before the N10. In the U.K. it’s 379 British pounds, and is a considerably more technically impressive phone for only a small amount extra.

The OnePlus Nord 10 5G should last a solid two years, though expect it to really slow down by that time. That said, the phone doesn’t have an official water-resistance rating, so to get it to two years, you’ll need to be careful with it.

No. You should spend a little extra consider the Google Pixel 4a instead.