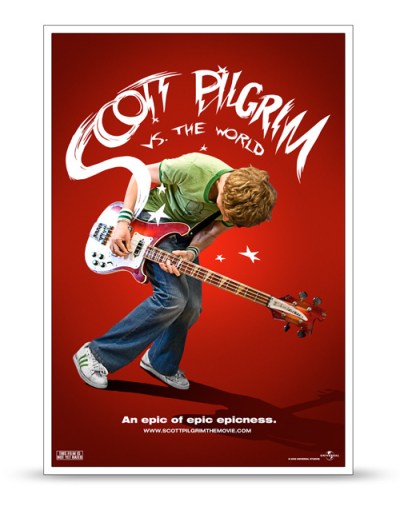 I should preface this review with three points. First, I am a giant geek for director Edgar Wright. I loved Shaun of the Dead, thought Hot Fuzz was awesome, and I still watch his British TV show Spaced now and then. Second, I am a long-time gamer. A quick check on my other articles can confirm that. I grew up as a gamer, and never got over it. So third, it should not be a surprise to say that I was very excited and had high hopes for this movie. I am relieved to say I wasn’t disappointed, and yet, I left the movie slightly afraid for Scott Pilgrim. But I’ll get to that.

Just to clarify, before I put on my “reviewer hat” and begin to criticize certain things because that is my job, I just want to make it clear that I loved this movie. I can easily say that this is my favorite movie of the year. It may not be the “best” movie of the year — it won’t win any awards, and it won’t become the “must-see” movie like Inception did (which I also thought was amazing), but I loved it. Every scene has multiple things going on that will require several viewings to catch, each joke is fresh and original, and the direction is done with the skill of a master filmmaker.

Scott Pilgrim vs. The Critics

The first and most important thing you must understand about Scott Pilgrim is that it is a love letter to fans of video games. In fact, you could make an argument that it belongs among the best video game movies made, even though it did not come from a video game. Granted, the competition is fairly slim. Oddly, I have found in my travels that not everyone is a long-time fan of video games! I know, I was shocked too, but it is true. To those people, this movie will be the equivalent of someone that is tone deaf watching Moulin Rouge. The majority of the movie will simply fall flat and come off as bewildering, rather than the cleaver homage to 8-bit NES-style games that it is. If you don’t know what an 8-bit game is, then this movie is not for you.

Based on Bryan Lee O’Malley’s six-part graphic novel, the story is straightforward enough. Boy meets girl. Boy and girl date. Boy is attacked by a string of super powered-exes who want to kill him, and he must fight for his love as well as his own survival. Pretty standard fare. If you have seen the trailers, you probably have a fairly good idea of what the plot holds.

My mom- who does not even own a computer- will not appreciate this movie.  If your favorite movie is an obscure Argentinean silent film about the loss of love, or whatever, walk away. If you have never seen a video game before, then Scott Pilgrim CLEARLY isn’t for you.

If you leave this film wondering how Scott could have learned his fighting moves, then you missed the entire point of the film. The movie itself is a game, from beginning to end. It follows a certain game-like pattern in plot, it obeys the rules of gaming, and the climax of the movie is based around video games in so many ways, that even casual gamers will recognize it. The movie even manages to bring a logical explanation for having fight music.

You don’t have to currently be an avid gamer, but you either have to have a fond nostalgic remembrance of the early days of video games, or at least be willing to accept it in order to enjoy this movie. That will endear Scott Pilgrim vs. the World to some, while alienating others.

It is tempting to go into heavy detail here and gush about the parts that worked, and nitpick the parts that didn’t, but there really wouldn’t be much point. The movie is directed fantastically, acted well, and there are no real weak points in the sense of the story. There are things that not everyone would like, but the trailers give you enough of an idea of what to expect that going into detail would only serve to spoil the surprises. Besides, the real genius of the movie is not the plot — that is just one part of it. I loved the story, but people will decide whether they love or hate this movie based on factors other than the plot, and viewers will have made up their minds on that long before the climax of the movie.

Scott Pilgrim is not a saint or a typical hero. He is a 22-year old kid in a man’s body. When he meets the girl of his dream (literally, a girl he saw in a dream) he pursues her with a selfish abandon that alienates those around him and ends up hurting a few people. Scott is a kid, dealing with real life, but shirking any concept of responsibility, just like most 22-year olds. That might all sound like a negative, but it is really a huge plus. Scott is a decent guy, but he is a real person, and Michael Cera pulls off a surprisingly deep performance as a flawed guy that you still root for almost unreservedly. I have always been somewhat ambiguous to Cera — I tend to like the things he does but see him as fairly one-dimensional as an actor. He doesn’t totally convince me otherwise in this movie, but I enjoy him enough that I am now rooting for him as an actor. I bought him as Scott, and by the end, he made the role his own.

Wright knew exactly what he wanted, and thankfully he has enough clout, and enough fans in Hollywood, that he stacks the movie with talent from top to bottom. Every character adds to the movie, and even though there are some big names in minor parts, they add just enough depth to the role without taking away from the others around them, and it works in almost every instance. For example, Brandon Routh plays one of the evil exes, and takes what could be a very silly role, and makes it both funny and original. It also comes off as a bit of a parody of his Superman stint, which just adds to the humor. Kieran Culkin plays Scott’s best friend  Wallace and eats up the screen. Anna Kendrick has maybe three scenes, but all of which she handles perfectly. This movie is littered with burgeoning A-list talent, and they all seem to really enjoy playing their assigned roles.

The biggest criticism I can level at this movie is that the love story feels a bit contrived and too easy. There are reasons for it, and you can excuse it easily enough thanks to the nature of the movie, but with the plot entirely revolving around that love, at times it feels a bit weak. The movie expects you to take the love story for granted, and you quickly do, but as it is the emotional lynchpin that holds the whole story together, it is a bit thin. It is a minor quibble though. Cera and Mary Elizabeth Winstead, who plays the love interest Ramona, both sell it well enough, and they are both likeable enough to accept the rush of their courtship.

Some of the visual backgrounds also come off as drab at times, but that is more likely due to the comparisons between the scenes that are so intensely visual that they cast a shadow. In one scene, Scott might be in a club, fighting a colorful character that is visually spectacular, then he heads to his dull looking room, which looks odd in comparison.

As easy as it would be to say something cliché like “at its core this movie is a romance, or an action movie”–  and trust me, it is tempting to take the easy road and claim that — it isn’t accurate. Nor is it fair to Scott Pilgrim. This movie is totally original. There has never been anything exactly like it before, and no one has ever really tried. It borrows heavily on romances, comedies, and action movies, but Wright has a certain way of looking at films that is totally unique. Not everyone will be into his vision, but it is a matter of taste rather than a matter of technical skill.

The Making of a Cult Classic

And that leads me to the part about me being afraid. I loved this movie. As a long time gamer, a fan of comics, and generally an aficionado of all things geek, it felt like this movie was made for me. I identified with it, and in my heart I will jealously guard it. A small, greedy part of me wants this movie to slip by under the radar, so I can be the one to introduce it to people that I am sure would fall in love with it. It is a cult movie in the making, and I want to be in that cult. But the more mature side of me wants this movie to succeed at the box office. I want Wright to be recognized as one of the best, most creative and original directors working today. I want studios to give him the keys to the executive bathroom, so to speak. The more freedom Wright gains through success, the better off film fans will be. I’m just not sure how realistic that is.

My fear is that this movie will end up trading box office success for a cult following. Scott Pilgrim will quickly win the support of fiercely loyal fans who will carry it on through the years, so in that sense it is almost guaranteed to be a success. Wright’s other hits Shaun of the Dead and Hot Fuzz both tasted the cult love, but this one should really grab hold of a small, but loyal group, like a very funny, video game-inspired tick. But that might mean that the appeal will be somewhat limited.

If you don’t know what “1-up” means, then this movie will just be dumb. None of the obscure reference will make sense, and the subtleties of the humor will disappear. Even casual gamers might not get it all. Particular music from video games will play at key moments, and that will either make you wide eyed with appreciation, or will go unnoticed. Very little middle ground to work with.

There will be three groups of people that leave this movie. The first will think it was stupid and a waste of their time. To that group, I say good day, sir! We have nothing further to discuss. The second group will have gotten most of the humor and enjoyed it, but missed most of the subtlety. They will be amused but quickly forget it and not understand what the big deal is. The third group — my brethren — will immediately begin to wonder when they are free to see it again, who they can take, and just how awesome it was. To that group, I salute you.

Subtle jokes that will appeal a hardcore niche group. Every scene has at least one extra layer to it, from the music, to the visuals, to the dialogue. The film is wildly original from beginning to end. The acting is all top notch, and minor roles become memorable ones.

Subtle jokes that will appeal to a hardcore niche group- many will find themselves on the outside looking in.