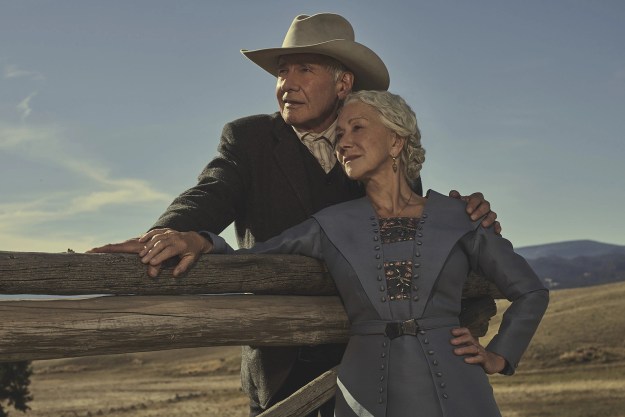 “Taylor Sheridan's latest Yellowstone prequel series, 1923, is shaping up to be a disappointingly melodramatic, forgettable western.”

1923 begins, like so many other Taylor Sheridan productions, with a doom-laden moment of violence. The show’s opening scene, which sees Cara Dutton (Helen Mirren) ruthlessly gun down a fleeing man in cold blood, is followed by two other instances of ominous brutality and death. These opening images are all underscored by a narration that speaks of crumbling empires and bodies found frozen in the dead of winter. To call 1923’s opening a somber one would, in other words, be a massive understatement. However, whatever weight 1923’s opening minutes might have had is erased by the clunkiness of creator Taylor Sheridan’s writing.

Not only do the series’ opening three scenes flow ineffectively from one to another, but the narration that accompanies them serves little purpose other than to solidly place 1923’s story within the history of the Duttons, the fictional family around which Sheridan’s growing Yellowstone universe revolves. Even Mirren’s bloodied debut scene feels like nothing more than a superfluous teaser, one that’s solely meant to hook viewers in despite how incongruently it fits within the rest of 1923’s largely meditative, exposition-heavy premiere.

Set around 40 years after 1883, Sheridan’s previous Yellowstone prequel, 1923 follows Cara and Jacob Dutton (Harrison Ford), the matriarch and patriarch of the Dutton family, as they deal with various hardships and tensions in their Montana community. In the series premiere episode, which is the only installment that was provided to critics early, the primary conflict facing Jacob and Cara is the growing tension between their community’s cattle ranchers and sheep herders.

The latter party is unofficially led by Banner Creighton (Jerome Flynn), whose own desperate desire to prevent his herd from dying leads him into direct conflict with Jacob and his fellow ranchers. As far as conflict goes, 1923’s premiere is severely lacking, but the series does show signs of life whenever it actually lets Flynn and Ford go head-to-head with each other. Outside of Jacob and Cara’s immediate problems, 1923’s premiere spends a considerable amount of time in Africa following Spencer Dutton (Brandon Sklenar), one of Jacob’s nephews, as he tries to run away from his experiences in World War I by making a hard living as a hunter of deadly animals.

Over the course of its first chapter, 1923 follows Spencer as he faces down not only an African lion but also a leopard. While these scenes are written with Sheridan’s trademark confidence and Sklenar brings a refreshingly grounded approach to his character as well, Spencer’s African adventures are so disconnected from the rest of 1923’s plot that they inevitably feel like dramatic detours. The same, unfortunately, can be said for the scenes in the 1923 premiere that focus on Teonna (Aminah Nieves), an indigenous girl trapped in a harsh, Catholic boarding school.

Teonna’s scenes are the hardest and most difficult that 1923’s premiere has to offer. As commendable as Sheridan’s commitment is to shining a light on the ways in which the U.S. government has abused America’s indigenous people, Teonna’s scenes bear so little connection to the rest of 1923 that they feel like they belong in a different show. That aspect isn’t helped by the fact that the scenes set in Teonna’s boarding school focus primarily on the abuse that she suffers at the hands of its “educators,” which makes investing in them that much more difficult.

As has been the case ever since Yellowstone premiered, Sheridan’s dialogue also remains a mixed bag. In his best moments, the Yellowstone creator is capable of writing conversations that feel lived-in and distinct. His commitment to remaining “a first-draft writer,” however, results in multiple cringeworthy lines still making it into 1923’s premiere, including one moment when Sklenar’s Spencer tells an unassuming train attendant, “I have no destination,” without a single note of self-awareness or sarcasm.

For the most part, 1923’s cast makes it out of the series’ premiere relatively unscathed by Sheridan’s more irksome quirks. Ford and Mirren, in particular, manage to bring their usual gravitas and charm to 1923. The series gives Mirren a chance to be more outwardly fearsome on-screen than she’s been allowed to be in years. Ford, meanwhile, seems to shine the brightest during 1923’s more conversational moments, which allow him to blend his commanding presence with a likable sense of wry wisdom.

Other noteworthy performers, like Robert Patrick and James Badge Dale, aren’t given much to do in 1923’s premiere, but they round out the show’s cast of cattle ranchers and law enforcers well. Unfortunately, while Darren Mann and Michelle Randolph bring two refreshingly youthful personalities to 1923, the romance between their two characters lacks any of the complexity or authentic qualities present in many of the show’s other relationships. To its credit, the series premiere does end with a moment that suggests that the romance between Mann’s Jack and Randolph’s Elizabeth may not maintain its pearly innocence for much longer.

It is hard to say for sure whether or not that’s what actually lies in Jack and Elizabeth’s future. In fact, having only seen one episode of 1923, it’s impossible to predict if the series will ever fix any of the flaws present in its premiere. It is, after all, entirely possible that 1923 will emerge as Sheridan’s most narratively successful TV effort to date. Based solely on its premiere, though, 1923 is shaping up to be a largely grim, melodramatic exercise on Sheridan’s part — one that never quite lives up to the talent of its own stars.

New episodes of 1923 premiere Sundays on Paramount+. For more about Yellowstone, click here.