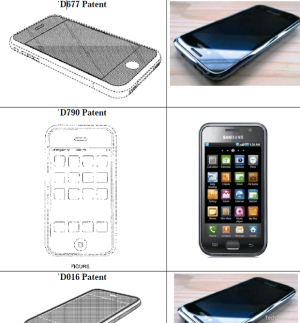 The patent war between Samsung and Apple took another turn this week, with Samsung dropping its patent-infringement countersuit against Apple to focus on its defense, reports Bloomberg.

According to Samsung spokesman Nam Ki Yung, who spoke with Bloomberg, Samsung dropped the suit on June 30 “to streamline the legal proceedings.” Samsung will continue its patent defences in another counter-claim in a suit filed by Apple at the same US federal court in San Jose, California.

Samsung’s now-void countersuit against Apple, originally filed in April, claimed that Apple had copied its Galaxy line of smartphones and tablets in the design of Apple’s iPhone and iPad devices. This came in response to an initial lawsuit filed two weeks prior by Apple, which argued that Samsung had actually copied Apple’s iOS devices with their Galaxy Tab touchscreen tablet and a variety of their smartphones, the Galaxy S 4G, Epic 4G and Nexus S.

The Samsung countersuit famously demanded that Apple show the company its upcoming iPhone 5 and iPad 3 devices, a request the presiding judge denied.

The Samsung-Apple legal battle has become an international fight, with litigation proceedings taking place in at least five countries across the globe, including South Korea, Japan, German and the UK. According to Samsung, the halt of one of its lawsuits in California will not affect the rest of its patent defenses elsewhere.

“Samsung will continue to actively defend and protect our intellectual property,” said Nam.

Reports indicate that Apple could release both the iPhone 5 and iPad 3 as early as fall of this year.

Topics
This new Windows 11 feature will help you protect your passwords
How much storage do you need on your new iPhone 14? Here’s how to decide
HP unveils new IPS Black monitor with one key new feature
This reliable leaker has some bad news about Apple’s M2 Pro chips
Boston Dynamics’ festive robot video has a surprise ending
Overclockers surpassed the elusive 9GHz clock speed. Here’s how they did it
Amazon starts drone delivery trials in California and Texas
What to expect at CES 2023, from mondo TVs to EVs
12 high-profile tech opportunities for those job hunting
Make tech work for you: 10 side gigs to make extra money for the new year
CES 2023: Intel’s new 13th-gen CPUs are faster, cheaper, and more efficient
GeForce Now upgrades to RTX 4080 for 4K 240Hz cloud gaming
Nvidia brings the mighty RTX 4090 to laptops at CES 2023