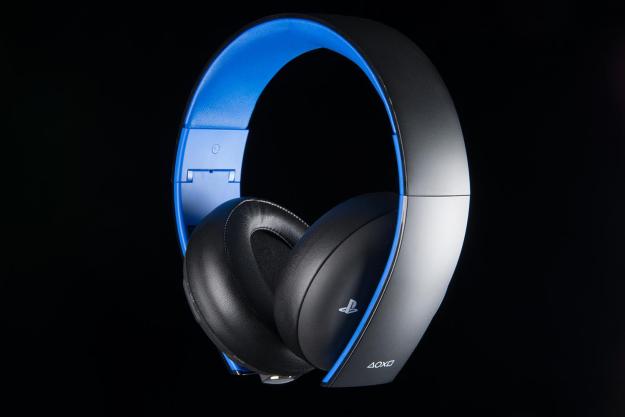 Sony’s PlayStation 4 is the top-selling console in the world right now. And though having a stake in everything from laptops to TVs may stretch Sony a little thin in some areas, it can also function as an advantage. In this case, its expertise in both audio and gaming has produced the Gold Wireless Stereo headset.

With the Gold Wireless (which we’ll call the Gold from here on out), Sony hopes to leverage several decades’ worth of audio experience to lure legions of gamers right back through the door for their headset needs. The Gold offers some enticing incentives to stick with Sony, including 7.1 virtual surround, compatibility with several PlayStation devices as well as Mac and PCs, and a lightweight design dabbed with a touch of PlayStation nostalgia. That’s a potent combo for a headset priced just under $100. But can it deliver the way specialty headsets from the likes of Turtle Beach and Astro do?

As you might expect, you don’t get a premium unboxing experience with the Gold – no magnetically sealed high-gauge box, or velvety foam inlay here. However, as we pulled out the headset, we were pleasantly surprised by its solid feel and minimalist frame. The headset’s leatherette ear pads felt plush and comfy to the touch, and the subtle stenciled PlayStation symbols along the bottom of the oversized headband were a nice accent.

Inside an accompanying box of accessories, we found a single-sheet quick-start manual, a small USB dongle, a lightweight travel sack, a 3.5mm audio cable for connecting to a PS Vita or virtually any other audio device, and a mini-USB to USB charging cable barely longer than a piece of licorice.

For a gaming headset – and we stress that caveat – the Gold are pretty stylish. The wide headband is both modern and succinct. The band curves all the way down to the base of the oversized earpieces, which adjust along a track hidden along the blue interior. The lower half of the headband breaks down on hinges to fold the earpieces in for easy storage or travel – an appreciated inclusion, though we felt they had a tendency to collapse a bit too easily.

The headset’s leatherette ear pads felt plush and comfy to the touch.

The all-black earpieces are covered in rubbery material along their outer edges, with heaps of leatherette stitched along thick pads at the interior. Another healthy layer of padding runs along the underside of the headband. The headset’s nerve center resides on the left earcup, which bears rubberized buttons along the edge for sound and chat volume, microphone muting, virtual surround sound (labeled VSS), and general volume level. A small switch turns the headset on, at which point the headset begins searching for the accompanying wireless dongle; if the dongle is powered up, the two will pair automatically. The switch has settings labeled 1 and 2, the latter of which engages a bass-boost mode.

At the bottom of the left earpiece is an input panel for the micro-USB charging cable and the 3.5 mm cable. Nearby is a pinpoint microphone for game chat. That last design facet was a welcome change-up from the intrusive wraparound chat mics that come with most gaming headsets we see. While the smaller microphone may not boast the kind of performance needed in a crowded tournament setting, it will work just fine for most users – it certainly did in our evaluation.

The Gold’s rechargeable battery allows for a claimed 8 hours of gaming, a respectable number for its price tier. Besides, if you have a gaming headset on for more than 8 hours at a time, there are much larger concerns at play than a power outage. Under the hood, the headset boasts 40 mm dynamic drivers with a claimed frequency range of 20Hz to 20kHz.

Turning the headset’s 7.1 virtual surround sound on and off is done by holding down the VSS button until you hear a beep. While using the PS4 and PS3, a logo appears on screen to tell you whether or not VSS is engaged, along with a battery indicator. Another nifty digital trick up the Gold’s sleeve is a companion app from the PlayStation store that allows users to customize the sound, and also upload a selection of preset modes. The bass-boost switch mentioned above can also be reprogrammed for desired presets through the app.

Wearing the headset for extended periods created virtually no comfort issues. The ear pads rested softly against our ears without excess clamping force, and the padding at the top of the band was just enough to let the already light headset float up top without wearing on our head.

Connection of the headset to both the PS4 and PS3 is a relatively simple affair, provided your PS3 software is up to date. Maybe that’s why Sony didn’t include detailed setup instructions, though we still found the lapse a little puzzling. The PS4 connection couldn’t be easier: You simply insert the dongle into one of the USB inputs, turn the headset on, and it instantly pairs and outputs sound.

However, with the PS3, you may need to go into Settings => Accessory Settings and call up the “Stereo Headset Audio Extension” to turn the option on. If the option isn’t in your Accessories Settings menu, it’s time for a software update. After that, you should be ready for action. Here’s a link to the full manual in case you run into any trouble. The headset also connects to a Mac or PC via the wireless dongle, though following Sony’s link for detailed connection instructions led us into a feedback loop between the Gold homepage and the online manual. Whoops.

We started our evaluation of the Gold Wireless headset with the spooky PS4 pseudo-Zombie title, Outlast, which proved a perfect testing ground for the 7.1 virtual surround sound feature. The surround immersion began immediately, with bellowing thunder claps echoing in layers behind us. Moving the character in a circle provided some nice directionality from the storm, as well as from the variety of creaks and other ambient noises, creating a convincing spatial effect with relatively smooth transitions.

The subtle nuances of the game, such as the main character’s heavy breathing, the crunching of broken glass under his boots, or the sweep of his arms against his jacket were all areas where the headset breaks from the deeper immersion level you’ll experience with higher-tier models. The sounds were clear, but weren’t delivered with the rich definition and texture required to help bring them to life, making the game’s slower moments more extraneous than enriching.

The surround immersion began immediately, with bellowing thunder claps echoing in layers behind us.

Still, we were generally impressed with how well the Gold laid out the collection of effects and eerie music, providing a balanced sound across the spectrum, with no audible noise from the wireless connection, even in the quietest scenes.

We next loaded up the bombastic space shoot-em-up, Resogun. At first, we were a little underwhelmed with the low end, hearing a lack of power in explosions and the whopping of arterial weapons. However, engaging the bass boost mode put those concerns to bed, providing more thunder to the boom, and a more palpable overall effect, providing a broader and deeper foundation for more treble-intensive effects.

As we continued to explore a wide variety of selections from both the PS4, and our aging PS3, we found little to complain about with the Gold Wireless. Occasionally, the midrange come off sounding a little nasally for dialog, and we didn’t get the crystalline precision we’d like in the treble, but hey, that’s what happens when you knock $200 off the bottom line.

Sony’s PlayStation Gold headset provides clear, powerful sound, convincing virtual surround, and the kind of long-wear comfort that holds up under marathon gaming sessions. Both PlayStation and PC gamers looking for a headset in the $100 range should consider the Gold a top option in the budget segment. The cans may not cost a lot, but they deliver where it counts the most.

The real winners of Evo 2022? Crossplay and rollback netcode

The best Chromecast deals for August 2022