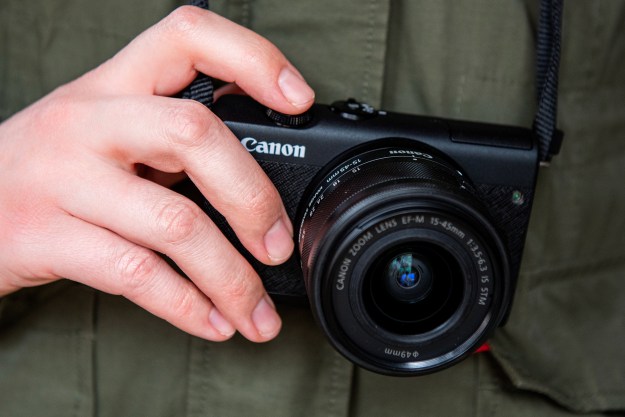 At first glance, the Canon EOS M200 looks like a basic, unassuming compact camera. But the $550 mirrorless camera is hiding several big features under the hood.

Designed for young shutterbugs itching to move beyond their smartphones, the M200 is one of the simplest, most straightforward mirrorless cameras on the market. Canon axed everything extraneous, eliminating the viewfinder, hot shoe, and even the grip. Then it sprinkled in beginner-friendly features like in-camera tutorials.

While aspiring enthusiasts will quickly run into its limits, the Canon EOS M200 is an excellent minimalist camera. For the right customer, it has what it takes to stand out in 2019’s extremely crowded camera market.

The M200 is light. After sliding it into a camera bag, I felt like I was carrying around an empty bag. Even compared to relatively compact full-frame mirrorless cameras like the Nikon Z 6, the M200 served as a reminder of why mirrorless cameras were invented in the first place. Even with the 15-45mm kit lens attached, the 10.5-ounce M200 feels more like carrying around a point-and-shoot than an interchangeable-lens camera. Without a viewfinder or grip, the camera is one of the simplest we’ve seen.

The M200 uses a three-inch tilting touchscreen that flips all the way forward for selfies. The 1.04-million-dot resolution is decent for the price and shows a good level of detail.

The list of tactile controls is brief. There’s a mode dial with only three options surrounding the on/off button, which is next to the shutter button that’s wrapped by a control wheel. Besides the screen, the back houses the usual four-way control cluster, playback button, and movie record button.

The kit lens is just as bare-bones. There’s a lever to retract the lens to a more compact size when not in use, but no manual focus switch or focus scale.

In the name of both weight and price conservation, the body of the M200 is constructed from plastic. It doesn’t feel as solid in the hands as a weather-sealed camera, but it doesn’t feel like a cheap camera either, instead sitting somewhere in the middle.

The lack of controls with no real grip to speak of may be a minimalist’s dream, but more nightmarish for the all-day shooter. Clutching a thin camera with no grip isn’t exactly ergonomic. For casual photographers, though, eliminating the grip to save space and weight may a good thing.

While you do get some advanced options, like manual exposure and RAW capture, the M200 shoots like a smartphone. There are only three shooting modes on the mode dial — if you can even call it that — but several more options just a few taps away. Rotate the mode dial to the camera icon, and those hidden options are unlocked, letting you access scene and manual modes through the touchscreen.

On-screen instructions make the M200 even easier. The camera will send different prompts or suggestions while you are shooting, like reminding you to raise the pop-up flash or pointing out the location of the creative filters. Once you get the hang of the camera, you can dismiss future reminders by pushing the menu button when one comes up.

From how aperture priority can be used to control background blur to how HDR is good for high-contrast scenes, the camera explains what each shooting mode does in an easy-to-understand way. The on-screen instructions aren’t a replacement for traditional learning tools, but serve as a set of photography training wheels that help guide you.

The on-screen guides also assist with wirelessly sending photos to a smart device to make sharing almost as easy as shooting on a phone. The initial set-up is a bit long, but a guide on the Canon Camera Connect app walks through the process. Using the remote also doesn’t lock out the camera’s controls, as with some other cameras, and a handful of adjustments can be made remotely.

That smartphone-level simplicity is excellent for users who want better photos without diving head first into technical jargon, as well as novices daunted by the complexity of an advanced camera. But, that simplicity also makes the M200 falter when pitting it against other similarly priced mirrorless cameras that target a more experienced user.

Autofocus speed and accuracy is what we’d expect from a $550 camera.

While the camera houses a DIGIC 8 processor, it feels a bit slower than other Canons with that same chip. The 6.1-frames-per-second burst mode is expected for a budget level camera, but if you want to shoot RAW, the image buffer can only hold eight photos. Worse, it takes around eight seconds to process all those photos before you can shoot another burst.

Working with JPEGs, the camera can shoot 32 photos in a row at that speed and only needs around three seconds before being ready to shoot another full set. Given that most M200 buyers are probably going to fine with JPEGs, this isn’t too bad.

Autofocus speed and accuracy is what we’d expect from a $550 camera. In the default focus mode, the camera will automatically pick the subject, including looking for faces. Eye detection can also be turned on from the menu.

Tapping the touchscreen overrides the focus point and activates subject tracking. Tracking autofocus appeared to follow the subject on the screen accurately, but most shots ended up a bit soft. Continuous autofocus did okay when working with subjects moving at about a walking pace, but any faster and the camera struggled to keep up.

Tracking and eye autofocus worked well with video, which is a nice plus.

While the M200 may feel like working with a smartphone, but the 24-megapixel APS-C sensor means image quality is much better. Colors are mostly accurate, but the auto white balance tends to err on the cool side.

Sharpness is okay, but not great. The 14-45mm kit lens can only focus as close as .82 feet from the front of the camera, which made testing the lens sharpness a bit tougher. In many cases, soft shots were simply a result of the subject getting too close to the lens.

Noise reduction at high ISOs met expectations — not the best we’ve seen, but pretty solid for a budget camera. Increasing the ISO both adds noise and slightly softens the image, but I would use up to ISO 3,200 in tough lighting conditions without worrying too much about image quality. Keep that ISO number a bit lower if you plan on cropping the image later, however.

Video quality isn’t the best we’ve seen, but is pretty solid for a $500 camera.

Video follows a similar theme — quality isn’t the best we’ve seen, but is pretty solid for a $500 camera. A bit surprisingly, the camera does offer 4K and it lends a good amount of detail, but like many other Canons, 4K is recorded at a 1.6X crop of the sensor, effectively “zooming in” significantly. The widest setting on the kit lens is still okay for capturing video selfies, but you’ll need to stick to 1080p resolution if you want the full angle of view.

More limiting for video is simply the camera body itself. There’s no headphone or microphone jacks, not that you could mount a microphone to the camera without a hot shoe, anyway. While the flip-up screen and strong autofocus could make the M200 a contender for a good vlogging camera, the lack of ports and the 4K crop means there are better options.

The Canon EOS M200 is the perfect camera for the pre-photographer that can’t decide between a smartphone, a point-and-shoot, or a mirrorless camera. Simple enough for anyone to use, the camera is also tiny enough to take anywhere. On-screen tutorials and a touch interface make the camera simple to use.

But don’t let the fact that it’s an interchangeable lens camera fool you into thinking it can satisfy the enthusiast photographer. While beginners will love the camera, anyone hoping to grow their photography passion beyond the basics will be left wanting.

Budget mirrorless cameras are plentiful, but none feel quite as simple and streamlined as the M200. For another $200, the Sony A6100 offers industry-leading autofocus along and a faster shooting and more controls. It includes a viewfinder, hot shoe, and a larger grip. The A6100 offers a similar resolution and a flip screen, but weighs 3.5 ounces more.

The aging Sony A6000 comes in closer in price. It also has the faster performance and additional physical controls and features of the A6100, but without 4K video.

The Olympus PEN E-PL9 is our current favorite for beginner cameras and also sits at a similar price point. The camera offers more controls, built-in sensor-shift stabilization, and fast performance. Its smaller Four Thirds sensor won’t do as well in low light, but as a more mature system, there are many more lenses available for it than for Canon’s EOS M system.

As a budget camera, the M200 doesn’t have the same rugged build as Canon’s pricier, weather-sealed options. Still, with some care, the camera should last a few years, although you may outgrow it in that time.

Yes. Buy the Canon EOS M200 if you want the image quality of a “real” camera without the complexity. It’s far from the best camera under $1,000, but others aren’t as streamlined or compact.