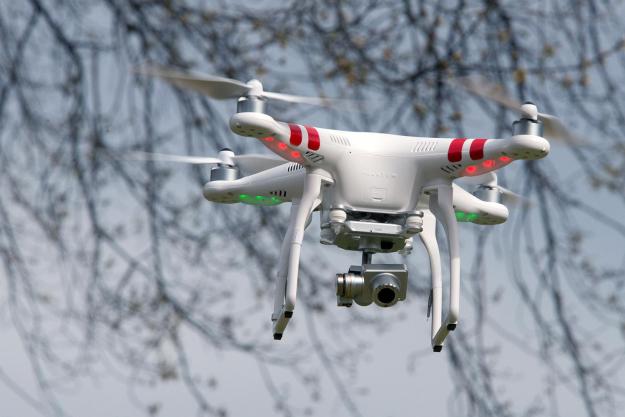 “No wonder DJI’s Phantom 2 Vision+ is one of the most popular drones in the world right now: It’s an absolute blast to fly, and the learning curve is practically nonexistent.”

When you picture a drone in your head, chances are pretty good that you picture a Phantom 2. DJI has been making the drone for years now, and the various configurations of it have collectively become one of the more popular quadcopters in the world.

So, does it live up to all the hype? We got our hands on a Phantom 2 Vision + and took to the skies to see what all the fuss was about.

If you couldn’t already tell from the name, the Phantom 2 Vision+ is DJI’s most tricked-out deluxe edition of the drone. In contrast to the standard Phantom 2 and Phantom 2 Vision, the Vision+ sports a number of high-end features, including a 3-axis gimbal stabilizer for its camera, a longer video transmission range (a claimed 500 to 700 meters in open areas), and the unique ability to film shooting straight down, which you don’t see all that often in drones.

This is a pretty stout little drone.

Another thing that sets this drone apart from the competition is the level of autonomy it boasts. Using DJI’s accompanying mobile app (available for iOS and Android), you can opt to fly the drone via waypoints, allowing you to relinquish control and just let the drone fly itself to pins you drop on a map. This, in addition to the drone’s auto-land functionality, make the Vision+ a particularly good choice for first-time pilots who might be worried about crashing.

This is a pretty stout little drone. Despite being made of plastic, the drone’s hull gives only slightly when you twist and turn it, and the arms feel dense and strong. You definitely don’t need to worry about the quadcopter losing an arm if it takes a hard landing. Unless you drop this thing from ten stories up onto a concrete sidewalk (which is not an impossibility), hull damage shouldn’t be a big worry.

The Phantom’s legs, however, are much more flimsy than the rest of the craft. This is most likely by design though. Strong legs add extra weight, so here DJI opted to keep them lightweight, slightly flimsy, and above all, replaceable. If you do break one off, new landing gear can be purchased for just a couple bucks, and attached with a Philips screwdriver.

You’ll want to keep the landing gear in good condition, too. The Phantom’s legs are the only thing protecting the drone’s camera and gimbal from bashing into the ground. The gimbal and camera assembly are definitely the most fragile parts of the drone, but so long as the legs stay intact, the drone’s design makes it mostly impervious to damage in the event of a crash.

Out of the box, the drone’s 11.1V, 5,200mAh lithium polymer battery will get you about 25 minutes of fly time, according to DJI. In our initial “hover only” test, we found this to be fairly accurate. The drone hovered at a height of 10 feet for almost exactly 24 minutes before going into the failsafe “low battery auto landing” mode.

As soon as your 20 minutes of flying are up, it’s back to the charger for another hour and 40.

This was under the least-demanding flight conditions, though. Battery life is a different story when you’re actually flying the drone around and making the motors work hard. In most of our trials, the Phantom lasted around 19 to 20 minutes. If it’s fighting a lot of wind, or you’re flying at top speed for extended periods of time, you can expect even lower flight times.

Once your battery is dead, it takes about one hour and 40 minutes for a full reboot, which is a bit of a bummer. The basic package only ships with one battery, so as soon as your 20 minutes of flying are up, it’s back to the charger for another hour and 40. For this reason, it’s probably a smart idea to snag yourself an extra battery so you can do a hot swap when your first one runs out. Too bad they run a steep $120 even on Amazon.

Immediately after taking to the skies, we were struck by how responsive and well-tuned the Phantom 2’s controls were. Even the slightest movement of the joystick will register almost instantaneously, giving the drone a very precise and athletic feel in your hands. Within just a few minutes, we felt like our brains were hardwired to the controls, so the learning curve is pretty low here. Novice pilots needn’t be discouraged — it only takes a bit of practice before you’re super confident with this drone.

A large part of this ease of control comes from the drone’s satellite connectivity. You’ll need to calibrate the GPS before each new use, but once you do, the drone will know its position and orientation. This allows it to do things like fight oncoming winds to remain in roughly the same area, and even fly back to its home position and land autonomously. The software is right in that goldilocks zone — autonomous enough to make flying really easy and intuitive, but not so autonomous that the controls feel completely out of your hands.

For the most part, we were impressed with the Phantom’s overall flight performance. But it’s not without a few downsides. One notable annoyance is that the controller doesn’t allow for simple control of the camera gimbal. All camera controls on this model are controlled through DJI’s accompanying smartphone app, so changing the angle of your shot can be tricky without a physical dial or joystick. You either tap arrows to move the view up and down, or put it in Accelerometer Sensor Mode, which lets you tilt your phone back and forth to move it up and down. DJI has addressed this issue in its newest generation of controllers, which feature a roller for adjusting the gimbal. If you plan to use your drone for aerial photography and videography, you’ll definitely want the new controller.

The “Vision +” part of the Phantom’s name signifies its extra bells and whistles. In addition to the stock Phantom 2 quadcopter drone, this model comes equipped with a 1080p/720p camera that shoots in 30/60 frames per second (respectively) and takes 14-megapixel stills. The field of view on this badboy is about 110 degrees, so while it’s certainly a wide-angle lens, it’s not nearly as fisheyed as a 170-degree GoPro lens. To top it all off, the camera is mounted on a 3-axis gimbal stabilizer for super-smooth video.

If the stock specs aren’t good enough for you, the good news is that upgradability and customization options are off the charts. Because the Phantom drone is one of the more popular quadcopters on the market, there are a staggering amount of accessories for this drone. Want a black hull instead of a white one? Prop guards? An obstacle avoidance system? Practically anything you could want for this drone is available online.

After spending a couple weeks with the Phantom 2, it’s clear why this is one of the most popular drones in the biz. It’s ready-to-fly right out of the box, it’s durable and well built, and most importantly, it’s an absolute blast to fly. The controls are simple enough that even a novice can start flying right away, but aren’t so simple that an advanced pilot would find them limiting. DJI has found a winning recipe here.

Serious aerial photographers and videographers will probably want to spend some extra cash and get a system that’s better suited for filming, but if all you’re looking for is a (relatively) cheap and easy-to-use drone that shoots good-looking video, the Phantom 2 Vision+ is definitely worth some consideration.

Everything leaving Hulu in July 2022

Everything leaving Netflix in July 2022