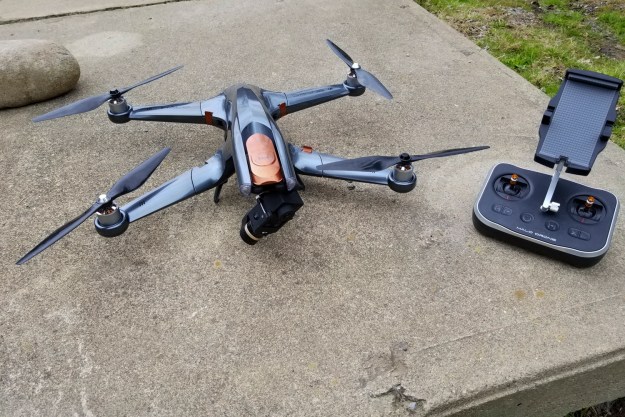 Halo isn’t exactly a big name in the drone space. The company got its start selling hoverboards that (much to our disappointment) don’t technically hover. Shortly after finding success in the rideable tech business, the company then moved into drones (which thankfully do hover), and now offers a quadcopter called the Halo Drone Pro: a souped-up version of its full-sized, full-priced flying machine. We took one out for an extended test to see how it stacks up against UAVs from big-name drone companies like DJI and Yuneec.

What’s in the Box?

The Halo Drone Pro arrived in its own heavy-duty hardcover backpack and immediately impressed us with its gunmetal gray plastic housing, which immediately reminded us of something one might fly in the actual Halo video game – only without any guns.

Luckily, the Halo Drone is at least armed with a 4K camera capable of taking stills and video. The remote control has a nice, classic RC airplane look and feel with precision, responsive metal analog sticks and a host of mysterious buttons. Within the cavernous backpack lies a host of small devices that go with the drone.

It looked like something you might fly in the actual Halo video game – only without any guns.

There’s the follow module, which acts as a beacon for the drone — provided it has direct line-of-sight with GPS satellites. There’s a vaguely James Bond-ish wrist controller and a Wi-Fi module that you need to slot into the back of the controller in order to stream video to your phone. Halo even includes two extra rotors for those of us who tend to break them.

There are two distinct sides to actually playing with the Halo Drone Pro. Flying it is obviously a key element in the enjoyment of any drone and Halo’s is exceptionally fun to zoom about through the sky. The other side, however, is all the things you’re required to do before you can actually get the drone in the air. Here, things are decidedly less fun.

All that stuff in the handy case needs to be synced before you can do anything and, as is so often the case, pairing the Halo Drone’s heap of peripherals to your mobile device can be a huge pain. Using an Android-based Samsung Note 8, it was a constant battle to get the controller, Wi-Fi broadcaster, follow module, and the drone itself all synced up and playing nicely together in a quick manner. To make matters worse, we were forced to go through this rigmarole every time we wanted to fly the drone.

This meant connecting to the drone’s Wi-Fi network (which always took several minutes to find), waiting for the app to find the Bluetooth signal from the controller and drone, and making sure the follow module had a clear line of sight to the skies for a GPS signal. If you want to use the watch controller, you need to make sure to sync that instead of the main controller, as it won’t let them operate simultaneously.

The actual app (and you’ll need to use the mobile app to use the Halo Drone) is far from intuitive, especially when having syncing issues. It’s easy to argue, however, that since this is a “Pro” drone, the interface is accordingly more dense and complicated. In any case, Halo could do with a UI expert to streamline the syncing and calibration process, among other more advanced control settings.

When it all works, however, the Halo has a lot going for it. It’s a hardy piece of equipment that kept on chugging along despite a couple mishaps caused by pilot error. At one point, while getting the hang of the controls, we accidentally caused it to buzz directly into the side of the house, leading to a painful series of crashes and crunches. We lost a rotor thanks to that mishap, but the drone itself was still perfectly fine.

It was a constant battle to get the controller, Wi-Fi broadcaster, follow module, and the drone itself all synced up

Another questionable bit of flying was at least partially caused by a flaw in the video signal. The video feed is not very crisp and sharp, despite the fact that this drone is equipped with a 4K camera. The video quality when playing back on a TV or other screen is merely ok, but not exceptional.  On bright sunny days (of which there were almost none during testing), the picture quality is better, but the camera has real issues with low light settings that plague the winter months here.

Worse, despite the Wi-Fi broadcasting pack, there is a noticeable delay in the video feed of about a second and a half or so. This means you really can’t fly it via the video feed, and are forced to maintain a visual lock on the Halo Drone while you buzz around.

Tough enough to take a tumble

I discovered the Halo Drone’s video playback lag in spectacular fashion, while mischievously trying to follow my kid around the backyard. After a flying flawlessly for a few minutes, I suddenly heard a terrible crunching and whining sound as the drone got caught up in some tall dead vegetation on the border of the property — even though the video on my phone’s screen hadn’t gotten there yet. Oddly, as bad as it sounded from afar, it didn’t even lose a rotor that time, although my kid now makes fun of my bad piloting skills.

Had I been a more intelligent human father type, I would have just strapped the follow module to her arm and had her run amok while the drone kept pace from afar. I’m not personally sure what people are using the following module for, to be honest, but I have to assume it involves things with the word “extreme” in them. I just ended up walking the drone like a floating dog that, unlike my actual dog, doesn’t chase cars/cats/other humans at every opportunity. Although in retrospect, a drone that chases humans might have some real entertainment value where I live.

When it’s not crashing, the Halo Drone is a blast. It’s fast (up to 45 mph), maneuverable, and responsive. You can get a faster rig if you opt for a racing drone, but the Halo feels just fast enough to be exciting for non-racers without compromising controllability.

Whether zooming high above the treetops which surround my house or strafing the ground because I’m a horrible person who laughs maniacally while scaring ducks, the Halo drone flies great. It also hovers extremely well. Airtime under normal conditions easily reached around 45 minutes. Even in below-freezing weather, the Halo ran for over half an hour without a hitch. That’s insanely good battery life for a drone of this size.

Charging is a bit of a fuss though, especially if you’re using all the add-ons. The camera is generally charged through the Halo Drone’s battery, which didn’t seem to cause any issues, but we found charging the main drone battery (it only comes with one) takes several hours. Worse, there’s a single charger that has multiple charging heads for the remote control and the drone battery — and you can’t charge both things at once.

There’s a single charger that has multiple charging heads for the remote control and the drone battery — and you can’t charge both things at once.

This basically means that, once the battery dies, you have at least a six hour wait before all your batteries are fully recharged. On the bright side, the remote will only need charging after several flights.  Odder still is the alligator-clip-like charger for the follow module and wrist controller. Again, there’s only one included, which means you’re forced to charge them in turn — although it only took about an hour to juice both up during our tests. The Halo shows off a distinct lack of streamlined user friendliness here, not to mention a lot of cables.

The controller’s range is listed at 1 kilometer (0.62 miles), but thanks to its mobile GPS abilities, you can set routes for the drone to follow — either a simple tap that sends it from point A to point B on the map or more complex routes by laying down waypoints.

The $1,000+ drone market is incredibly competitive and rapidly evolving, and unfortunately the Halo Drone Pro just can’t keep up. At $1,100, this drone costs just as much as some of the best UAVs on the planet right now, but also lacks some of bells and whistles that have become standard in drones that are half the price — especially object avoidance.

With the ability to follow, program routes, and return to its home spot, the Halo offers some nice features and it certainly proved to be durable, but still isn’t as complete a package as some of the other top-tier offerings in this price range.

Yes. $1,100 can get you a damn fine drone these days, and if you’re willing to spend that kind of money, you have a lot of options.

First and foremost, we’d recommend looking into DJI’s Mavic Pro and Mavic Air drones. Both are compact, durable, and absolutely stuffed with features. They have obstacle avoidance, folding form factors, excellent flight performance, and more intelligent flight modes than you can shake a stick at. At $999 and $799 respectively, they’re also a fair bit cheaper than the Halo Drone Pro.

DJI’s Phantom 4 is also a solid contender here, as is the Yuneec Typhoon H. Both are comparably priced to the Halo Drone Pro, but boast superior handling and more features. They’re also much less fussy to use, and don’t require so many finicky peripherals. It’s worth noting, though, that the Halo Drone did outlast both the P4 and Typhoon H in our flight tests – so if you’re after long flight times, Halo might be the way to go.

This is a tough call. Since the Halo Drone itself is quite hardy and replacement parts are readily available on the internet, the drone’s hardware and essential components should definitely stand the test of time.

On the flipside though, Halo might not stay in the drone business forever. The UAV market is insanely competitive right now, and if Halo can’t hang, there’s a chance it could decide to discontinue its drone – which would mean no more firmware patches, bug fixes, or software updates. To be fair, this is all speculation and we have no way of knowing whether Halo will stay in the drone game or not, but it’s something to keep in mind.

If the company does decide to jump ship, this drone will age quickly and become obsolete in a few years.

Probably not. You can get more bang for your buck elsewhere.

DJI may be prepping launch of Cinewhoop-style drone