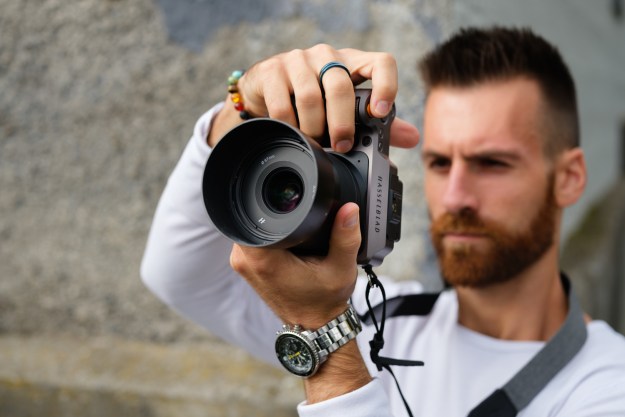 “The refined X1D II makes medium format's case for being the next full frame, but comes up short of a must-have.”

The medium-format X1D II 50C is a refinement of Hasselblad’s original X1D-50C, known for its great image quality and frustrating user experience. Far from a revolutionary update, it is built on the same sensor and uses the same design (albeit with a new, and quite attractive, graphite gray color), but brings numerous small improvements.

There is one headline update, however. The price. At $5,750, it’s thousands less than the original, pitting it against flagship full-frame DSLRs from Nikon and Canon, not to mention competing medium format models from Fujifilm. This dramatic reduction in price is exciting for high-end enthusiasts and professionals, and signals that Hasselblad might see medium format — at least this particular 44mm x 33mm variety — as the next full frame.

As full frame continues to grow more affordable, photographers may start looking toward a new aspirational format for the next step up in image quality. The 50MP sensor in the X1D II is several years old, but because it has about 70% more surface area, it offers a marked improvement in noise and dynamic range compared to many full-frame sensors. It’s not a huge difference compared to the best full-frame cameras, but for the right situations, it can be worth it.

I’m still not convinced the Hasselblad X1D II will encourage most photographers to look beyond full frame. It lacks many of the niceties common to cameras from Canon, Sony, and Nikon. Still, its price proves Hasselblad is willing to make its brand more obtainable.

The original X1D left much to be desired, but one thing it nailed was the design. The X1D II has left well enough alone, and it’s still the most beautiful camera on the market.

It isn’t form over function, either. This is a streamlined camera, but it puts the critical controls where you need them. It also has the best touch interface in the industry, which lets you easily rearrange icons to fit your personal preference, just like you can on a phone. All this is made better thanks to a new 3.6-inch monitor. The electronic viewfinder, meanwhile, now uses an OLED panel.

Another new feature is the USB-C port, which can now charge the battery while in the camera. I don’t know if many working professionals will take advantage of this, but it’s a nice touch, and something I used often throughout this review.

The previous Hasselblad X1D-50C suffered sluggish performance, but that’s been addressed for the X1D II. Start-up time has been cut in half, although it’s still a ways away from the instant-on of most full-frame cameras. The refresh rate of the monitor and EVF has increased to 60 frames per second, a huge improvement over the odd 37 fps rate of the original. Continuous shooting has bumped up to 2.7 fps from just 2 fps.

You must enjoy the work of photography to get the most out of it, but it offers a rewarding experience for those who do. The weighty metal body and the deliberate, wait-for-it shutter (which is actually in the lens) make every exposure feel like a decision made by committee. Even would-be snapshots or test photos take on a new sense of purpose. It is the complete opposite to taking pictures with your phone.

The camera’s deliberate nature feels precise when you want to take your time. It’s also annoying when you’re in a rush. Compared to the Fujifilm GFX 100, which I was lucky to be testing at the same time, the Hasselblad feels antiquated. While the Fujifilm impressed me with its ability to keep up with a 9-hour wedding shoot, the Hasselblad doesn’t lend itself to unpredictable shoots. This is mostly due to the autofocus, which still relies on slow contrast detection and works poorly in low light.

Autofocus was unreliable while shooting portraits in a makeshift studio with limited ambient light. Often, it would fail to find focus at all. I had to use manual focus just to have a chance at a sharp shot. That’s frustrating when any sub-$1,000 camera would have been fine.

I think that makes the X1D II a great camera for landscape and fine art photography, but there’s no denying that it lacks the versatility of faster full-frame cameras.

In a twist, the slow shooting experience is paired with a modern and responsive touch interface. Navigating menus and settings on the X1D II is faster and easier than most. Only Blackmagic Design, with its Pocket Cinema Camera line, makes a touch interface equal to Hasselblad’s.

Hasselblad also has a new tethering solution for the X1D II that lets you shoot directly into an iPad Pro using the Phocus Mobile app. I wasn’t able to test this feature, but it could be a useful tool for commercial photographers.

The X1D II is a top performer when it comes to image quality. The biggest change over the original X1D is that you can now shoot full-resolution JPEGs, which is nice if you need a quick deliverable, but anyone buying this camera is buying it to shoot RAW. The RAW files remain among the best in the business and hold up well even against those from the newer, higher-resolution sensor in the Fujifilm GFX 100. If you don’t need 100 megapixels — few among us do — you can’t get better image quality than the X1D II.

Yet it’s a small difference compared to full frame, and not one that will be worth it for the majority of photographers. Most full-frame systems have a broader selection of lenses available, too, and while those lenses aren’t objectively better than Hasselblad’s, they do create more possible perspectives. But the X1D II doesn’t aim broad, it aims deep. If your style of photography fits into its narrower use cases, it will give you breathtaking results.

In many ways, the X1D II feels like what the first X1D should have been. It’s a beautiful, expertly crafted machine that also happens to be slow and cumbersome. In one respect, that’s part of its charm — the photographic equivalent of hammering keys on a mechanical typewriter — but is undeniably behind the curve.

The X1D II will find a home with fine art photographers who can utilize and afford it. For the rest of us, it’s more valuable as a beacon of what’s to come. Between Fujifilm and Hasselblad, there’s now more, and more affordable, medium format cameras than ever before. The X1D II itself may not be ready to take over full-frame territory, but the format is looking increasingly attractive.

The closest competitor is the Fujifilm GFX 50R which uses the same sensor and a similar (albeit less attractive) body. It’s also cheaper, although still not cheap at $4,500. The 50R doesn’t have all the modern tech of the GFX 100, like phase-detection autofocus and image stabilization, so it doesn’t outperform the X1D II like its $10,000 big sibling does. Whether you like it more than the Hasselblad comes down to the lenses; Fujifilm’s GF lenses are typically less expensive than Hasselblad’s XCD lenses, but we’ve been impressed with the XCD lenses we’ve tested.

At the risk of sounding like a broken record, most photographers are still better off with a full-frame camera. The Sony A7R IV will net you more megapixels for less money, plus it has better autofocus and continuous shooting speed.

This is a very well made machine that is built to last for years. Since Hasselblad uses lens-based leaf shutters, there’s also little in the way of moving parts within the camera body itself. Just keep some sensor cleaning supplies close at hand, as the camera does not have an auto-cleaning sensor.

No. There’s a niche group of photographers who might find this camera well suited to their needs. However, most people — including professionals — will need a faster, more responsive camera.

Topics
GoPro takes to the skies with the Hero10 Black Bones
World’s smallest .56-micron pixel heralds the end of camera bumps
DJI Mavic 3 roars to the scene with dual-cam Hasselblad camera
iPhone in space: SpaceX crew shares Earth image shot on Apple’s handset
How to remove the background from an image
Instagram boss says to expect even more video content
6 awesome Earth images captured from the ISS in July
This GoPro Hero 10 bundle is $100 off at Best Buy today
The best iPhone tripods for 2022
Watch this Mavic 3 drone soar above the world’s highest mountain
How to watch DJI unveil an all-new drone today
DJI Avata vs. DJI FPV: Which first-person drone is best for you?
Astronaut reveals source of ‘intriguing’ bright light on Earth