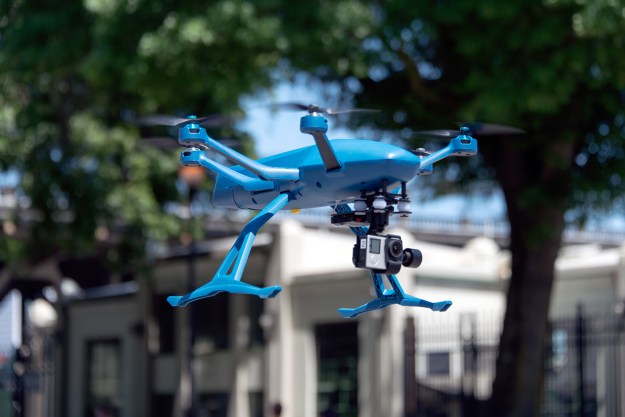 “With autopilot this fickle, you’re better off just learning to fly.”

A couple years ago, a totally unknown drone company took Kickstarter by storm with an innovative new auto-follow drone called the Hexo+. Unlike other drones that were available at the time, it didn’t require a controller or any piloting experience — you could just send it into the air with the tap of an app, and it would film you autonomously from the sky.

At the time of the campaign, it was one of the only drones that could pull this off. But now that the Hexo+ is finally for sale, it’s one of about a dozen different UAVs equipped with auto-follow functionality. DJI, Yuneec, and others have all added it to drones that you can also fly manually.

So now that “follow me” mode is almost a standard feature on most drones, can a one-trick pony like Hexo+ still prove its worth?

Hexo+ brings a few unique features to the table — the first and most obvious of which is the fact that it’s a hexacopter. This gives it a bit more stability in the air, and also means that if one motor fails or a prop breaks, the drone won’t fall out of the sky right away. That’s nice, because unfortunately it doesn’t have any kind of obstacle avoidance built in.

This bird doesn’t come equipped with a built-in camera, either. Hexo+ is of the “bring your own GoPro” variety, so if you don’t already have an action cam to use with it, you’ll need to dish out another $300 to $500 in order to use the drone. Technically you can fly it without a camera, but since it only does auto-follow, there wouldn’t really be any point.

Since it’s almost completely autonomous, the Hexo+ comes with no controller, and only provides a small set of basic pilot controls built into the smartphone app. You can adjust the position of the drone, and decide how it will fly as you move. Right now the app offers 12 different camera movements, and Hexo says that “soon, you’ll be able to customize, combine, and create movements” to better suit your needs.

Hexo+ is a fickle little bastard.

What really sets the Hexo+ apart from the competition is how in-depth the auto-follow technology is. Instead of simply following from a preset distance or orientation, the drone can slide in or out, pan to follow you from a fixed position, hover close or far, and even fly in an orbit around you while you move. While this happens, the Hexo’s proprietary framing and predictive tracking algorithms make sure the camera is always aimed correctly — which in theory means you’ll never miss a shot, and your videos will have a more professional, cinematic feel to them.

We didn’t put this drone to the ultimate test and crash it into a tree (as we unintentionally have with a few UAV review units), but the Hexo+ feels pretty sturdy. The arms are strong and well-built, and the hull definitely feels like it could take a tumble down a rocky hillside without breaking into a million pieces. We also liked the removable legs underneath. Not only do these make the drone easier to pack — the fact that they’re removable also means that if you ever break the landing gear (which is usually the first thing to break during a crash), you can replace it without any tools or tricky installation. Just buy some new ones, pop ‘em into their slots, and start flying again.

That said, a few design elements left us scratching our heads. The GoPro mount, for example, can’t accommodate a camera in its protective case, and uses a cheap Velcro strap that can easily be lost. You basically have no option but to fly with your GoPro naked, exposed to the elements, and held on with Velcro.

Once you’re in the air, you can expect the Hexo+ to stay aloft for anywhere from 15 to 18 minutes. At a plain-ol’ hover, it’ll fly for about 18 minutes — but as usual, if you fly it hard and push the motors to their limit, you’ll only get about 15 to 16 minutes before it starts beeping at you and flashing warning notifications on your screen.

Those figures pale in comparison to the 20-, 25-, and even 30-minute flight times offered by some other drones on the market right now. But what the Hexo+ lacks in flight time, it makes up for with a very speedy charge time. Hexo’s rechargeable batteries can go from empty to full in less than 40 minutes, which is actually one of the quickest recharge times we’ve ever encountered. Still, you’ll probably still want to buy multiple batteries if you plan on filming more than half an hour in a given day.

As for range, Hexo+ can allegedly stay in contact with your phone for up to 300 feet — although this may vary widely depending on the type of phone you’re using. The good news, however, is that because it’s an auto-follow drone, range isn’t really much of an issue. If the drone is doing its job, it’ll keep up and maintain a reasonable distance from you (and a good wireless connection) regardless of where you go. We had a bit of trouble getting the drone into the air, but once it was up and running, it never fell out of range a single time.

Operating the Hexo+ isn’t really so much “piloting” as it is “directing.” Once it’s in the air, the drone is almost completely autonomous — all you need to do is tell it how to behave with your phone.

This level of autonomy is excellent in theory, but in practice, it leaves a bit to be desired. The biggest problem is that when you’re ready to fly, you need to initiate the flight sequence in the right order, and then pass a number of automated preflight checks — which is easier said than done. If you don’t pass one of these preflight checks, the drone will not leave the ground. There’s no manual start button — so if the drone isn’t oriented correctly, calibrated just right, sitting on even ground, or if your phone’s Wi-Fi is on, it will refuse to take off.

These features ensure that the drone flies safely, but they also turn you into a servant to your little flying robot. You need to satisfy all its requirements in order to coax it into the air — and unfortunately the Hexo+ is a fickle little bastard. If even one thing isn’t perfect, it won’t fly, and you have to close the app, restart the drone, and try the whole startup process again. This reboot process is the last thing you want when you’re out having fun snowboarding, mountain biking, or whatever crazy action sport you’re hoping to film with a UAV. There’s nothing worse than stopping in the middle of the hill to bust out your camera drone, then getting stuck for half an hour because the drone refuses to take off.

We had this very problem when we took Hexo+ out to the racetrack for DT’s annual Car Of The Year Awards. The idea was that we’d be able to fly the drone, film the cars, and basically conduct two reviews at the same time — while also getting some sweet auto-follow footage of the event. When the Hexo+ failed to get a stable GPS connection, in the middle of the treeless central Oregon desert, the whole operation was stunted. Try as we might, we couldn’t manage to get past the preflight checklist screen, and had to use a different drone to film the whole event.

This wasn’t an isolated incident, either. The Hexo+ gave us trouble on a handful of other outings as well. If it wasn’t the GPS, it was something else. On a few of our subsequent attempts, the Hexo+ couldn’t seem to pass the “hardware” section of the flight check, and required multiple re-starts, re-pairings, and re-calibrations before it decided it was OK to fly. One time it even passed the flight check, lifted a few inches off the ground, then immediately decided that its compass needed to be calibrated, landed itself, and demanded to be restarted. Frustrating? More like maddening.

When we finally managed to get the Hexo+ into the air, it started to redeem itself. The follow functionality is quick and precise, and the various flying modes allow you to go much deeper than basic auto-follow. In addition to full control over the drone’s orientation, the app’s simple interface allows you to easily transition between flying modes at the push of a button. Watching footage after the fact, these modes seemed to give the footage a more cinematic feel.

Having the Hexo+ follow you is certainly easier than trying to pilot it yourself, but using your phone as a controller is a bit cumbersome in certain situations. Switching Hexo’s flying mode while you ride a bike, for example, is rather awkward unless you’ve got a phone holster of some sort.

While Hexo doesn’t supply you with a camera, it does provide a decent three-axis gimbal to keep the camera steady. It’s not the greatest gimbal ever made, but it does offer vibration dampening along the Z axis, which is a nice feature that doesn’t always come standard.

Unfortunately, you won’t find many additional accessories or upgrades. An upcoming app upgrade will allow you to link together flight modes and create custom flight paths. But unless you’re comfortable making modifications yourself, Hexo’s hardware will forever remain the same.

If you’re going to be a one-trick pony, you need to be really, really good at that one trick. The Hexo+ is not. Its autofollow technology is good, and arguably better than what you’ll find in some competitors, but it just isn’t dazzling enough to make us forget about all the stuff it can’t do.

First and foremost, Hexo’s maddeningly fickle preflight checks often make it more of a burden than a companion on your adventures. It’s so hit or miss that we honestly spent more time trying to get the drone to lift off than we did flying it.

To make matters worse, even if you do manage to get the drone into the sky, it’s still not really an ideal videographer. The drone can capture good shots, but its lack of obstacle avoidance tech limits the kinds of places you can film in, and because it’s not equipped with onboard altitude sensors, you can’t shoot on hilly landscapes unless you’re using a phone with a built-in barometer.

When compared to some of the other drones on the market, Hexo doesn’t bring a whole lot to the table. The drone currently retails for $999 with no camera. After adding one, you’re in the same price range as DJI’s Phantom 4 and Yuneec’s Typhoon H — both of which offer advanced auto-follow in addition to other flying modes and advanced features. And if you already have a GoPro, you’re better off with the $800 3DR Solo, another drone that also offers both “follow me” and “watch me” modes on top of manual flight controls.

Why ride a one-trick pony when you can ride a thoroughbred for less?