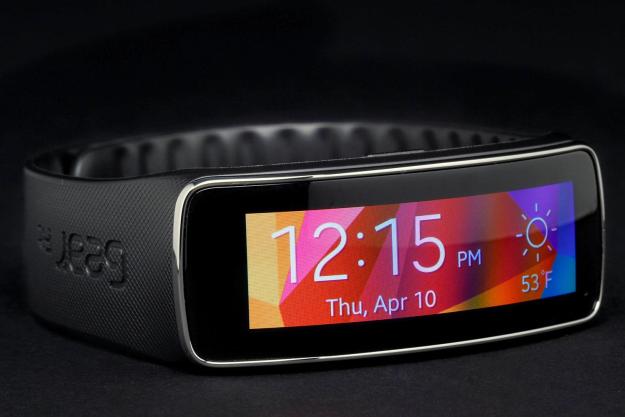 “The Gear Fit is beautiful and comfortable to wear, but it’s an average smartwatch and poor fitness tracker.”

Smartwatches are struggling to take off. The Pebble has a niche following but everything else just isn’t selling, or capturing anyone’s imagination. Fitness bands and trackers, on the other hand, are doing well indeed. Enter the Gear Fit. It’s Samsung’s next big idea: merging a fitness band with a smartwatch. The good news is that it’s very pretty. The bad news is that it doesn’t really do fitness or smartwatching very well.

Updated on 4-18-2014 by Jeffrey Van Camp: A very astute reader pointed out that there is a way to rotate the screen of the Gear Fit. I’ve added this into the “With great beauty, comes great design flaws” section. After using it, we find the vertical orientation awkward in its own ways.

The Galaxy Gear was one bulky smartwatch when it came out in late 2013 (read our Galaxy Gear review), but Samsung learns quickly. The Gear 2 and Gear Neo look like solid improvements, and the Gear Fit is a gorgeous piece of wearable tech.

The Gear Fit is a gorgeous piece of wearable tech.

Samsung has outdone itself with the display, fitting a curved Super AMOLED touchscreen to its piece of wearable tech – a world first. AMOLED screens have deep blacks and vibrant colors – more so than your typical LCD screens; they’re a perfect fit for wearable watches. Keeping with the traditional fitness band shape, the 1.84-inch screen is oblong rather than square, with an unusual 432 x 128 pixel resolution. It looks great, and positively glows on your wrist.

Don’t expect too much class though. The band attaching it is a rubbery plastic, looking much more like a fitness band than a watch. You can pull off the band to replace it with a new color, but this won’t ever be a high-end watch replacement, if you’re going for class.

In our first hands-on we complained that the bottom of the Gear Fit wasn’t nearly as curved as the top. After wearing it, we still think it’s a little thick, but the light weight and small footprint make it one of the most comfortable watches we’ve worn.

Samsung has added some vertical watchfaces, but the Gear Fit’s gorgeous thin screen is also one of its biggest detriments. Menus and text sit perpendicular to your wrist, but humans don’t typically hold our arms straight up in front of us, finger pointed to the sky, when we check the time or fiddle with the menus. Usually, you’ll find yourself looking at your wrist and cranking your neck to read the text, or you’ll get used to reading at a 90-degree angle.

As a reader astutely let us know, Samsung has added a way to rotate the screen so it’s displayed vertically instead of horizontally. This makes using the menus easier to read on the go, but still awkward. The screen is too thin, making it impossible to view more than one word on a line. Reading notifications isn’t a ton of fun in this orientation (or either, honestly). Still, we recommend it over the default horizontal view.

The other annoying thing about the Fit, like many wearables, is its charger. It charges via Micro USB, but requires a special snap-on dongle, meaning you can’t charge it just anywhere. Fiddling with the charging dongle in the dark when we were getting ready to sleep was also difficult.

Basic set up isn’t too hard

We didn’t have too much trouble setting up the Gear Fit. Basically, you need a Samsung Galaxy phone or tablet (these are the compatible models) and the Gear Fit app from the Samsung App Store (yes, Samsung is heavily pushing its own app store). The Gear Fit connects up via Bluetooth. Once connected, you can change the background, clock design, and what notifications you get right from the app. The Fit is compatible with any Android app that sends out notifications.

Once the Fit is synced to your device (ours was a Galaxy S5), it will automatically receive notifications that you can read. It will also let you accept phone calls.

The interface is simple enough, but can get cumbersome

The built-in touchscreen on the Gear Fit is wonderful, and it’s a lot of fun to swipe between screens and apps. For the most part, Samsung has nailed the interface. You can even re-order icons on the screen.

But there are some cumbersome elements. You have to go into the Settings menu to find battery life info (it’s something you’ll want to keep an eye on), and the only apps available are mostly all fitness related, outside of notifications.

There is a way to install custom apps, but there aren’t many of them, and they aren’t easy to install. News Republic, for example, has a special Gear Fit version of its app, but you have to install it on your Galaxy S5 from the Google Play Store. But after you install it, it doesn’t appear on your phone at all; it’s only on the watch. You won’t be able to use it either, not until you also install the standard, non-Fit version of News Republic as well. Confused yet?

The hardcore among you won’t have a problem with this odd companion app system, but many people (including us) will find it confusing and overly complicated. It will be nice when watches can do things without needing so much help from a smartphone.

It has a lot of great fitness features

The Gear Fit is packed full of fitness-tracking apps, most of which connect and sync to Samsung’s S Health app. It can track your heart rate with its built-in sensor, as well as daily steps, sleeping habits, running, biking, and hiking. It has a timer and stopwatch if you need them, too.

But none of them work well

Unfortunately, none of these fitness-tracking features work as you’d want them to. Unlike almost every other fitness band, the Gear Fit doesn’t auto-count your steps. Instead, you have to tell it when you start walking. And it won’t start monitoring your sleep until you tell it that you’re falling asleep … now. Want to check your heart rate? Yep, you have to tell the Gear Fit to do this as well. Nothing is automatic on the Fit, and that’s its real downfall as a basic fitness tracker.

Nothing is automatic on the Fit, and that’s its downfall as a basic fitness tracker.

Sometimes you will remember to start it when you sleep or start walking, but many times you will forget, leaving big holes in your data. Not that the data is all that accurate. The pedometer on the Fit appears to be grossly overcounting our steps, (it’s difficult to prove that because we don’t count our steps all day). Then again, Fitbit, Fuelband, and others tend to overcount or undercount steps by a good margin as well, from our experience.

The Gear Fit syncs your information with your smartphone at intervals you choose, from every 3 hours to once a day. It has synced our heart rate tests, but doesn’t seem to want to sync our pedometer steps. We’re still trying to figure out what the problem is there.

Our device lasted several days on a charge, but if you turn on the pedometer all day and have a lot of notifications coming in, it does begin to drain quickly. Our unit lost about 15 percent battery life in a few hours during heavy use. Sadly, if you have to charge it at night, that makes it impossible to track your sleep.

The Gear Fit is a gorgeous piece of tech, and has an effective interface, but underneath the shimmer and gloss, it’s a mid-rate smartwatch and a poor fitness tracker. If getting phone notifications on your wrist is worth $200 (and you own a Galaxy phone that’s compatible), it’s not an awful product, but if you expect this watch to help you get in shape, or track your fitness, you’re in for one curved screen of frustration.

Video-editing app LumaFusion to get a Galaxy Tab S8 launch
Best iPhone deals and sales for September 2022
Experts say the iPhone 14’s satellite feature may have a dangerous side effect
The best touchscreen laptops for 2022
Apple AirPods Pro 2 vs. Samsung Galaxy Buds 2 Pro
Does the iPhone 14 Pro have a battery life problem? It sure looks like it
Your guide to the best e-book readers for 2022
How to delete lock screen wallpapers in iOS 16
iPhone 14 Pro vs. iPhone 13 Pro camera battle isn’t as close as you think
The best gaming tablets for 2022
Samsung’s new rugged phone and tablet tout 5G and 5 years of updates
The Apple Watch SE 2 is making me think twice about the Watch Series 8
The best Apple iPhone 14 Pro cases for your new smartphone