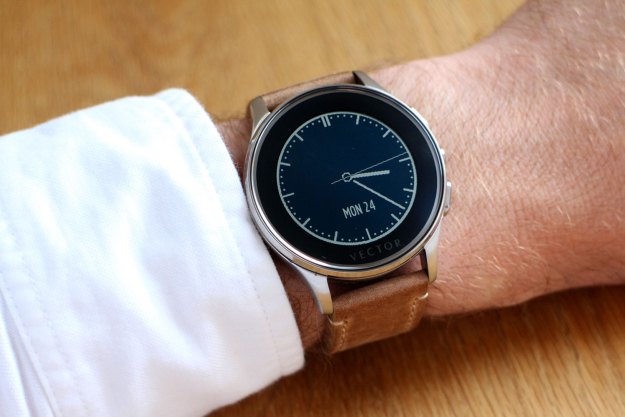 “The Vector Luna’s long battery life and super stylish, mature design make this smartwatch a pleasure to live with.”

All smartwatches look like toys worn only by geeks and 12-year olds. That’s the argument that many luxury watchmakers are clinging to as proof that connected devices are no threat to their livelihoods. It’s hard to disagree sometimes, particularly when looking at hardware like the Pebble. Even the Apple Watch, with its square face, misses the mark.

I had the choice of putting on the Apple Watch, or the Vector Luna. I chose the Vector.

Will a smartwatch ever compare to the sophisticated style of a luxury mechanical watch?

The answer is yes, and you don’t have to wait for TAG Hauer, Swatch, or any other big name to come up with it. The Vector Luna smartwatch does it already, and what’s more, it combines a fabulous look with one of the most desirable features in wearable tech — genuinely long battery life.

Sound like a pipe dream? It’s not. Here’s why the Vector may end up trumping every other smartwatch out there right now.

How smartwatches should look

Our review model came dressed in stainless steel, with a subtle brushed finished, and topped off with a polished chrome bezel. The lugs are slim, and hold a thick, brown leather strap in place, complete with coordinated stitching. On the side of the body are three controls — a center select button, and two navigational buttons. The Vector Luna’s not too thick, not too heavy, and crucially, not too gigantic.

That same description could be used for the LG Watch Urbane, but that’s where the similarities end. The Watch Urbane looks like a smartwatch — a piece of technology. The Vector Luna looks like a watch, and a damn fine-looking one too. Part of the reason is the screen tech. It’s not a touchscreen for a start. It’s monochrome, and is not bestowed with flashing lights or crazy animations. There’s a selection of simple watch faces from which to choose, and that’s about it.

The result is a watch that I wanted to wear, regardless of the clothes I was wearing, and one that received compliments and admiring glances. Not just from a few people, but from everyone. It’s a big deal. Every other smartwatch I’ve worn has split opinion. Vector hasn’t made a watch — smart or otherwise — before, but it’s obvious there’s a strong understanding in the company about what makes a good one.

There’s a slight caveat here. It fits on my wrist almost like it was made for me, but put it on a female wrist, and it’s almost comically enormous. While I appreciate the metal and leather version here isn’t very feminine, and that other designs in Vector’s range may be more suitable, it’ll be viewed as a very bold statement.

Heading out to meet a friend recently, I had the choice of putting on the Apple Watch, or the Vector Luna. I chose the Vector, and I think that’s extremely telling.

The Vector may make a fine piece of jewelry, but what about it’s technical ability? After all, it’s still a smartwatch, so it needs to do the geeky side justice as well. If you want to know the size of the screen, the resolution, and the processor, check the spec sheet. They’re not important. It’s a monochrome display that’s designed to show legible text, not pretty pictures. It does the job very well.

Vector wants the Luna to be a discreet smartwatch, and it’s not only about the design.

There’s no backlight either, so seeing the display at night is a challenge, but it’s always on — none of the “ambient mode” nonsense. The Vector Luna is a watch; and it tells the time, all the time. Notifications can be tailored to your preferences, or mirror your phone settings, through a dedicated Vector app. It vibrates when one comes through, but doesn’t instantly show the message on the display.

Vector wants the Luna to be a discreet smartwatch, and it’s not only about the design. To see your notification you’ll need to raise your wrist, or press the center button. The idea is that no-one sitting opposite you reads the message before you get the chance. A solid line will show up around the watch face, alerting you to an outstanding notification, should you ignore the vibration.

The gesture control works well, but sadly, just a turn of the wrist isn’t enough to activate the sensor. It often requires a sweeping movement, like you’re making a point of checking the watch — which rather goes against the whole discreet thing. The Vector doesn’t have a touchscreen either, so interaction begins and ends with a gesture and the buttons.

There’s no app store, thankfully, and adding widgets like local weather, step count, or another time zone — called Streams by Vector, and activated in the app — to some watch faces is as deep as any additional features go. It’s a smartwatch, and apps have always been a bit superfluous in the genre, and using the Vector proves it. The simplicity and unfussy UI make it quick to learn, and fast to operate.

The watch will keep track of your steps and calories burned, plus it has automatic sleep monitoring. I found the watch was too big to wear comfortably at night, so never made use of this feature.

On the negative side, the only way to mute the watch is to turn off the vibrations or adjust the alerts on the app — I’d have rather had a priority setting for calls on the watch, than start digging around in menus on my phone. Also, notifications delivered to the watch can disappear instantly from the lock screen on the phone, and from the Notification Centre on iOS. I’d prefer they stayed for the times I missed them on the watch. Early connectivity issues were solved with software updates.

At least a month of battery life. Really

There’s another huge benefit to stripping the Vector Luna of all the garnish — battery life. From the very start, Vector’s goal was to have the watch go for a month without needing a recharge. It sounded ambitious, but rather than dial it back, Vector then said it was aiming for at least a month. The Pebble lasts for 10 days, on average, and is considered a benchmark in the smartwatch field. Well, not anymore.

I picked the Luna up on July 22, and am writing this on August 25. Inside the app is a battery meter that gives an approximate measure of how much power remains. There’s exactly a quarter, which at the current pace means about another week left. That’ll be five weeks use under its belt when it revisits the sadly proprietary charger, which is mission accomplished for Vector.

There’s no real way of cheating either, because the watch can’t be turned off, and has been connected to either an iPhone or Android phone for about 80-percent of this time. The app performs in exactly the same way on both devices.

The smartwatch you’ve been waiting for?

Any negative aspects depend on your expectations. It doesn’t run apps, doesn’t make or receive calls, or let you draw emoji on the screen. If these are things you require, the Vector isn’t for you. It’s not cheap either, but then neither is the Apple Watch, or any luxury mechanical watch. It does have a sizable bezel around the display, which is the least attractive aspect of the design, but it’s not a deal breaker. The app could also do with a little polish.

The Vector Luna is a smart watch. It tells the time, just like a normal watch, then adds just the right amount of connected features, into a classy, attractive, and durable (it’s water resistant to five meters) body.

It’s the smartwatch for people who don’t really want a smartwatch, but do want the convenience of notifications on their wrist, without the inconvenience of several weekly visits to the power socket. Is the Vector Luna the piece of wearable tech you’ve been waiting for? We think a lot of people will say yes.

Video-editing app LumaFusion to get a Galaxy Tab S8 launch
Google gives Maps’ Immersive View a boost and adds a new vibe feature
This new Google Lens feature looks like it’s straight out of a sci-fi movie
Razer’s 5G-enabled handheld gaming system is getting a public release
The best tablets for kids in 2022: Fire HD, iPads, and more
Experts say the iPhone 14’s satellite feature may have a dangerous side effect
How the Galaxy Z Flip 4 fixed my unhealthy phone habits
iOS 16’s biggest Apple Pay feature might be delayed until 2023
Best iPhone deals and sales for September 2022
Huawei’s Mate 50 Pro is here with an insane 200x zoom
Best Prime Day Deals: What to expect from the October event
Best tablet deals for September 2022
Best Phone Deals: Save on Google Pixel 6, Galaxy S22 Ultra