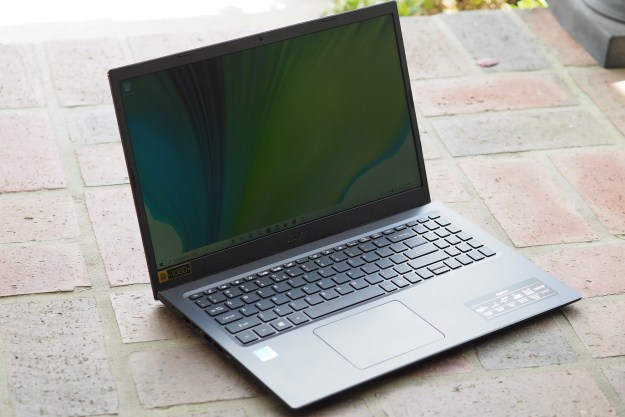 “The Acer Aspire 5's awful display ruins what would have been a decent budget laptop.”

Acer’s Aspire 5 has been one of our favorite laptops for a few years now, earning a spot on our best budget laptops list. Right now, the 2020 version of the Aspire 5 is listed as the best Windows 10 laptop under $500, an important segment that the machine dominates. Acer has introduced a slightly redesigned Aspire 5 for 2021 that boasts the latest 11th-gen Intel Core CPUs and makes a few meaningful changes to the chassis design.

Acer tweaked the Aspire 5’s design for 2021, with the biggest change being a new hinge that angles the chassis bottom several degrees to provide for better airflow and prop up the keyboard. It’s a welcome change to an otherwise mundane design.

As before, the lid is aluminum while the rest of the chassis is plastic, and the rigidity is the same as before. There’s quite a bit of flexing in the lid, while the keyboard deck and chassis bottom are slightly more rigid but will still give in to light pressure. Some other budget laptops, like the Lenovo Yoga C640, Lenovo Flex 5 14, and Acer Swift 3, have more solid build quality.

Aesthetically, the Aspire 5 is rather boring, with an all-black color scheme broken up with a few chrome Acer logos. If you don’t care about how a laptop looks and focus exclusively on the price, then the Aspire 5 will satisfy your tastes. But it certainly doesn’t stand out. Other colors will be available, including a silver scheme, which are likely to be more attractive than my bland black review unit.

The Aspire 5 isn’t a small laptop, thanks to bezels that are still too large for modern machines. The side bezels aren’t too thick, but the top and bottom bezels could use some slimming down, which results in a laptop that’s wider and deeper than it might otherwise be. The Aspire 5 weighs 3.64 pounds, which is down from 3.97 pounds in the previous version, and it’s 0.70 inches thick, both of which are reasonable for a 15-inch laptop.

One particularly nice design feature that’s been common to the Aspire 5 is its expandability. Access to the inside of the machine is relatively easy, allowing users to swap out the RAM and SSD. Acer also includes a kit for adding a 2.5-inch drive to an empty bay, making it easy to expand storage with either an SSD or a spinning hard disk drive (HDD). That kind of expandability is rare, and it’s welcome here.

As with many budget laptops that aren’t so thin and light as some previous models, connectivity is mostly a strength. You get an Ethernet connector, a full-size HDMI port, two USB-A 3.2 ports, and a USB-C 3.2 port along the left-hand side (no Thunderbolt 4 support here). You’ll find a Kensington lock slot, a USB-A 2.0 port, and a 3.5mm audio jack along the right-hand side. Wireless connectivity is up-to-date with Wi-Fi 6 and Bluetooth 5.1.

My review unit was equipped with a Core i3-1115G4, a dual-core 11th-gen CPU that runs at the full TDP of 12 watts to 28 watts but incorporates Intel UHD graphics rather than the newer Intel Iris Xe. According to our suite of benchmarks, this is a slow laptop. Starting with Geekbench 5, it scored just 1,215 in single-core mode and 2,544 in multi-core mode. That’s well below the usual Tiger Lake score that typically exceeds 1,500 in single-core and 5,000 in multi-core. In fact, it’s beaten out by some recent Chromebooks running the Android version of Geekbench 5, which is usually a rather slow proposition. Even the Samsung Galaxy Chromebook 2 with an Intel Core i3-10110U was close at 1,003 and 2,179.

In our Handbrake test that encodes a 420MB video as H.265, the Aspire 5 took five minutes exactly, which is at best 50% slower than the slowest Tiger Lake laptops we’ve tested. This is the first 11th-gen Core i3 that we’ve tested, and so all our comparison laptops are running faster CPUs. As an example, the Lenovo ThinkPad X12 Detachable, a Windows 10 tablet equipped with a Core i5-1130G7 (a slower Core i5), took just over three minutes to complete the test. The same held in Cinebench R23, another video-rendering test, where the Aspire 5 managed just 1,247 in single-core mode and 3,128 in multi-core mode. Here, the difference between the Aspire 5 and the ThinkPad X12 Detachable (1,125 and 3,663) wasn’t as great, but most other Tiger Lake laptops once again were significantly faster.

I found the Aspire 5 to be fast enough for basic tasks like web browsing and working in Office documents in real-life use. For $480, these aren’t terrible results. We didn’t test the previous versions of the Aspire 5 using the same suite of benchmark tests, and so we can’t directly compare their performance.

I’m not going to mince words here: This is the worst display I’ve ever reviewed. That fact was evident the minute I first booted the Acer Aspire 5 and logged into Windows 10. The display has a distinct blue cast to it that I believe is the result of atrocious contrast, and on-screen elements could be difficult to discern.

My colorimeter agreed with me. Brightness was very low at 211, meaning you’ll struggle to view the screen in bright office environments. The contrast was confirmed as exceedingly bad at just 60:1 (our threshold for a great display is 1000:1, and an average budget display is 600:1). Colors were poor as well, with just 53% of sRGB and 40% of AdobeRGB — both are the lowest in our database, and the typical midrange and premium displays hit 95% and 70% or higher, respectively. To add insult to injury, accuracy was also among the worst I’ve seen, at a DeltaE of 10.7 (less than 1.0 is considered excellent and most laptops are under 3.0 at worst). Only the display’s gamma was where it should be at 2.2.

In actual use, colors were washed out, black text was more of a grayish color, and the display was absolutely unpleasant. It’s my new standard for “terrible display,” and it left a horrible taste in my mouth because of it. Nobody will like this display unless they’ve never used a laptop before, and I’d pity them because they’d come away with such a poor impression of the state of the art. Acer needs to source a different panel because this one is just flat-out horrible. The 2019 and 2020 versions of the Aspire 5 were much better.

The audio wasn’t much better than the display. Volume was inadequate for all but the occasional YouTube video, although there was no distortion when turned all the way up. Mids and highs were clear enough, and as usual, there was little to no bass. The dual speakers aren’t bad, mind you, they just don’t offer much better than budget quality.

The Aspire 5 sports a fairly typical backlit island keyboard with black keycaps and white letters. The keys are a little small, but they provide comfortable spacing even with the dedicated (but tiny) numeric keypad. The switches are very light, with a nice snap and comfortable bottoming action. This is one area where the Aspire 5 shines, offering a typing feel that’s better than you get with many budget laptops.

The touchpad is also surprisingly good, as it’s quite large and responsive. It’s a Microsoft Precision touchpad and so provides reliable support for Windows 10’s multitouch gestures. It, too, exceeds the budget norm.

There’s no touch display, unsurprisingly, and as usual, I miss it. There’s also no Windows 10 Hello support, neither facial recognition nor a fingerprint scanner. That’s something that we’ve seen on budget laptops lately, and so its omission here stands out.

Acer equipped the Aspire 5 with 48 watt-hours of battery, which isn’t a lot for a 15-inch laptop. Even with the slower CPU, I was disappointed with this version’s battery life.

In our web-browsing test that loops through a series of popular websites, the Aspire 5 managed just under seven hours, two hours less than the 2019 version with a Core i3 but three hours longer than the 2020 version with a Core i5. Generally speaking, that’s not a terrible score, but it still puts the Aspire 5 in the lower bracket in our database. In our video-looping test that plays a Full HD Avengers trailer until the battery runs out, the Aspire 5 made it to 9.5 hours. That’s about 3.5 hours less than the 2020 version, and below the minimum of 10 hours we like to see on this test. Again, not a terrible result, but not great, either.

Finally, I ran a couple of PCMark 10 battery tests. The first, the Gaming test, evaluates how long a laptop lasts with the CPU and GPU being stressed. The Aspire 5 came in at 2.25 hours, an average score. In the Applications test, which is the best measure of productivity longevity, the Aspire 5 shut down after just under eight hours, at the low end of our database. The ThinkPad X12 Detachable, for example, made it to over 10 hours.

Overall, the Aspire 5’s battery life was mediocre. If you’re doing typical productivity work, you might make it through a workday on a charge. The laptop uses a proprietary charger, but you can top up using USB-C in a pinch if you happen to have an adapter handy.

I’d love to say that the 2021 Acer Aspire 5 maintains its place as our best budget laptop under $500. Unfortunately, it doesn’t, thanks to slow performance and an abysmal display. The 2020 model is still on sale, and you’re better off sticking with it.

As I just mentioned, the 2020 Aspire 5 is a better choice than the 2021 version. You’ll get a much better display and a similar build quality for around the same money, and you won’t give up much in the way of performance and battery life.

If I were looking for a better budget machine in this price range, I’d consider a capable Chromebook option, of which there are plenty.

The Lenovo Flex 5 14 with its AMD Ryzen CPU is another alternative. Its display is smaller at 14 inches, but it gets better battery life, is much faster, and its display won’t embarrass you in public.

It’s not the most robust-feeling laptop, but I have a suspicion that it will last for a few years of solid use — which is about what you expect for the money. You’ll have up-to-date components including Wi-Fi 6, although no Thunderbolt 4 is a bummer. The one-year warranty also isn’t anything to get excited about.

No. The display is truly horrible, which ruins the experience of using this laptop.

Topics
The best 15-inch laptops for 2023
HP Dragonfly Pro vs. Apple MacBook Pro 14: a solid alternative?
The best Lenovo laptops for 2023
The best Dell laptops for 2023
The 6 biggest problems with ChatGPT right now
Pro users are already unhappy with the upcoming Mac Pro
How to schedule an email in Outlook
15 years later, the MacBook Air could soon have its best year ever
How to watch Super Bowl 2023 on your computer
Microsoft Word vs. Google Docs
Turns out DirectStorage isn’t killing frame rates in Forspoken after all
Best laptop deals: Save on Apple, Dell, HP and Lenovo
Wi-Fi not working? Here’s how to fix the most common problems