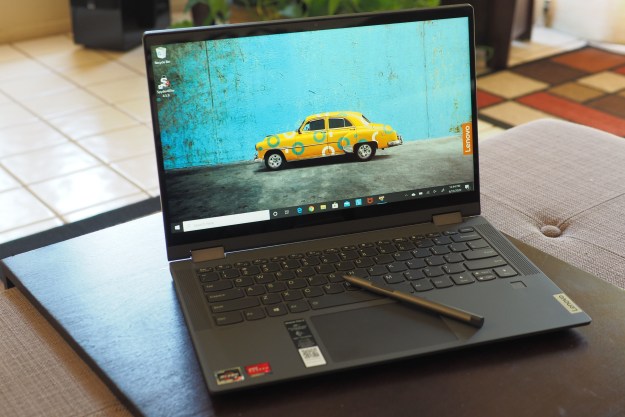 Laptops with AMD’s Ryzen 4000 chips seem too good to be true. The specs are outrageously powerful, and they’re cheaper than their Intel counterparts when it comes to some of the best laptops.

Take the Lenovo IdeaPad Flex 5 14, for example. It’s the latest in a recent string of Ryzen-powered budget laptops. This one comes with a six-core Ryzen 5 4500U and 16GB of RAM, while costing just $600. Based on the specs alone, it’s hard to imagine a better performance value for the price.

Is there a catch?

The IdeaPad Flex 5 is an all-plastic laptop. Lenovo calls it “normal” plastic up top and “sturdy PC/ABC” on the bottom. Chemistry lesson aside, it means that the laptop’s chassis is relatively sturdy. Don’t expect it to be as robust as a unibody MacBook Pro or even the $600 Lenovo Yoga C640. The lid, keyboard deck, and chassis bottom all have a bit of flex. It’s not egregious, though. Low prices and bendy laptops no longer necessarily go hand-in-hand.

It’s a rather nondescript design that doesn’t stand out– like many Lenovo lately.

The Flex 5’s hinge is firm. The tiny bit of wobble as you move the laptop around isn’t overly distracting. Most importantly, the tight hinge allows for smooth transitions through the various 2-in-1 modes, including clamshell, tent, media, and tablet. Obviously, the 14-inch display and resulting chassis make for a rather large and unwieldy tablet. You just don’t want to try holding a 3.3-pound tablet in one hand for too long.

Aesthetically, the IdeaPad Flex 5 is an attractive dark grey all around, with the only chrome being the border around the Lenovo logo on the lid and keyboard deck. Ultimately, it’s a rather nondescript design that — like many Lenovo lately — doesn’t stand out but manages to look good nonetheless. The Spectre x360 13 with its gem-cut design is on the opposite end of the attention-grabbing spectrum, and the Yoga C640 is very similar to the IdeaPad in its aesthetic.

One advantage to the Flex 5’s thickness is that it packs in a fair amount of connectivity. There are two USB-A 3.1 ports, a USB-C 3.1 port, a full-size HDMI 1.4 port, and a 4-in-1 SD card reader. Though Thunderbolt 3 is missing, many will appreciate the inclusion of some of those legacy ports, which come in handy. Wireless connectivity is still limited to Wi-Fi 5 rather than the more recent Wi-Fi 6 standard, and Bluetooth 4.2 is on board.

The IdeaPad Flex 5 doesn’t look like a cheap laptop, and it doesn’t perform like one either. AMD’s Ryzen 5 chips keep proving that it’s one of the best bargains around. In this case, it’s the Ryzen 5 4500U, which comes with six cores and six threads. It’s the same chip you’ll find in other cheap , such as the $650 Acer Swift 3. That option used the eight-core/eight-thread Ryzen 7 4700U CPU to power. Interestingly, the Flex 5’s processor performance is quite competitive with that chip.

First, it scored well in the synthetic Geekbench 5 benchmark, hitting 1,096 in the single-core test and 4,543 in the multi-core test. It was 20% faster in multi-core testing than the Acer Spin 3, a similar Intel Core i5 laptop. Clearly, the AMD chips do well when multitasking, despite have two fewer threads.

The IdeaPad Flex 5 is an extremely fast laptop for just $600.

Speaking of that, I then ran our Handbrake test that encodes a 420MB video as H.265 and uses as many cores and threads as a CPU has to offer. The Flex 5 took just over two minutes to complete the test, just eight seconds longer than the Swift 3. The Surface Book 3 13 took four minutes. Compared to the Dell XPS 13, a very fast laptop using the Core i7-1065G7, the Flex 5 finished in 38 fewer seconds.

The Flex 5’s fantastic performance is aided by its 16GB of , which is surprising to see in such an inexpensive machine. It all makes for an extremely fast laptop for just $600, one that will excel at heavy productivity multitasking and churning through demanding tasks like photo and video editing. The laptop will slow down when measured against Intel Core i7 that enjoy more threads, particularly 45-watt parts, but against the typical Intel CPUs you see in at this price, AMD rules.

The Flex 5 also includes integrated AMD Radeon Graphics, which according to 3DMark is slightly faster than Intel’s Iris Plus graphics. That means you’ll get a little boost in creative apps that can use the GPU, and you’ll be able to do some light gaming at lower resolutions and graphical settings. A game like Rocket League plays decently, but anything more intensive will suffer.

You get 52.5 watt-hours of battery capacity in the IdeaPad Flex 5, which isn’t a lot for a 14-inch laptop. I, therefore, didn’t have high hopes for longevity.

The Flex 5 was an average performer. It lasted eight hours in our web browsing test, compared to the Yoga C640 with its lower-powered CPU at over 10.5 hours. The lasted six minutes less than the Flex 5, hinting that the AMD Ryzen CPUs aren’t the most power-efficient. The Dell XPS 13 with a 1080p display and the Core i7-1065G7 lasted for 11.5 hours.

For a lighter load, I played a local video clip on loop, and the Flex 5 lasted for 11 hours. That’s not bad, but it’s far less than the spectacular 23 hours of the Yoga C640 and the strong 14.5 hours of the XPS 13. Lastly, I ran the machine through our most demanding battery test, the Basemark web benchmark. That replicates battery life while running heavier applications. It lasted three and a half hours, similar to like the Yoga C640.

No, it’s not a leader in battery life. But unlike a lot of budget of the past, the IdeaPad Flex 5 should at least last through the majority of a workday on a single charge.

So far, nothing about the IdeaPad Flex 5 screams “cheap.” Then, there’s the display.

It’s not that this display will bother you while working, or even watching movies. Actually, this display would have been pretty good five years ago. Although the contrast isn’t as high as better displays, it still shows black text on a white background without any huge quality concerns. And the colors might be limited and inaccurate when measured with a colorimeter — as creative types will do — but they’re not unnatural nor do they detract from everyday image viewing and web browsing. This isn’t a terrible display, it’s just a bad match for the performance that this budget laptop can provide.

But according to my colorimeter, Lenovo did have to use a cheaper panel. It’s a 1080p IPS display, but it has a narrow color gamut (just 47% of AdobeRGB and 63% of sRGB). The screen also caps out at just 242 nits of brightness, and even the contrast is low at 770:1. It’s a glossy screen, so you may run into problems with glare in brighter environments.

The lackluster image quality is a shame. Otherwise, the Flex 5 would have made for a capable little photo editing machine. We’ve seen the same panel used in many budget , but there are so notable exceptions, such as the Lenovo Yoga C640.

And the audio was a plus, with top-firing speakers next to the keyboard that provided plenty of volume without distortion. Bass was lacking as usual, but mids and highs were fine for tunes and the occasional YouTube video. You can even binge Netflix with these speakers in a pinch, as long as you’re listening by yourself.

If you’ve used any of Lenovo’s Yoga or IdeaPad keyboards, then you’ll be familiar with this one. It’s relatively shallow with plenty of spacing and a precise mechanism, meaning it’ll disappoint those who like lots of travel but is otherwise serviceable. I was able to type at full speed quickly enough, and while it’s nowhere near the Magic Keyboard on the much more expensive MacBook line or even the second-best (in my opinion) keyboard on the Spectre x360 13, it’s a solid keyboard that most users will enjoy.

The touchpad is comfortable as well and of average size for a modern Windows 10 laptop. It supports Microsoft’s Precision Touchpad drivers and offers up smooth and precise Windows 10 multitouch gestures. No complaints there.

As a 2-in-1, the Flex 5 naturally has a touch-enabled display that worked as well as usual. Lenovo also includes an active pen with support for 4,096 levels of pressure sensitivity, which makes it a good option for anyone who wants to illustrate or take detailed notes on the display. In many budget 2-in-1s, the pen either isn’t included (the Yoga C640 is an example) or not supported. Having it included in the box is a real plus.

Finally, Windows 10 Hello password-less login is supported by a fingerprint reader on the upper-right corner of the keyboard deck. It’s fast and accurate, and again, is a bonus on a $600 laptop. There’s no infrared camera for facial recognition, however.

The Lenovo IdeaPad Flex 5 is a spectacularly fast laptop for $600, with a build quality that at last earns the price. The configuration is impressive as well — you don’t often get a 256GB PCIe SSD and 16GB of for anywhere near this price. If a budget performer is your goal, then this is a great laptop.

The display is disappointing, though, meaning that all that power that could be aimed at creative types is a bit wasted. That’s a shame, and it holds back the Flex 5.

The Lenovo Yoga C640 is a bit smaller, gets much better battery life, and has a better display. It’s also $600, but it comes with less storage and a much slower CPU.

For just $50 more, you can opt for the even faster . It’s built well, looks good, and is the fastest budget laptop we’ve tested. It also has a mediocre display, though.

For that same price, you should consider going the route of a Chromebook. The $650 Google is an excellent choice, offering a great display and excellent portability.

The Yoga IdeaPad Flex 5 is durable enough to last as long as you expect from a $600 machine. And it’s fast enough to keep up with your workflow for years. There’s no 3 support, and so expansion is limited, but that is expected at this price point. The 1-year warranty is typical and disappointing.

Yes. The Lenovo IdeaPad Flex 5 is a very competent budget laptop that shows off the strength of AMD processors.