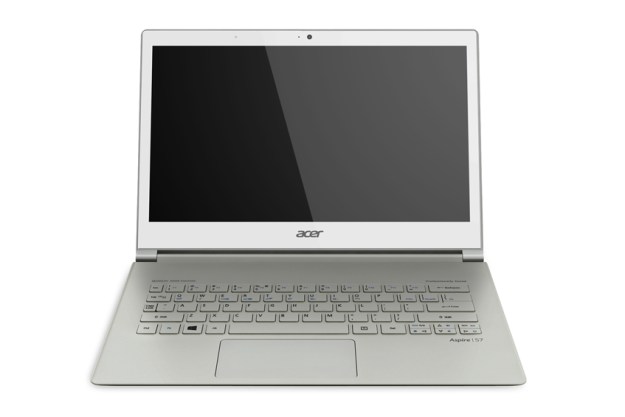 “The S7 delivers an incredibly thin profile and low weight without compromising display quality or performance. Only a few quirks keep the laptop from ranking among the best Ultrabooks.”

Acer’s slogan of “explore beyond limits” is appropriate. The company was an early adopter of the Ultrabook and has, since then, pushed the limits of size and weight in the category. It also was the first manufacturer to include a discrete graphics processor in an Ultrabook.

Yet, in spite of these improvements, Acer is rarely considered an innovator. Instead, it has a reputation for powerful-but-cheap products that are often below par in design and quality. A habit of releasing un-polished products is part of the problem. Acer’s Aspire M3, the first Ultrabook with a discrete GPU, was bad in every area besides graphics. The Aspire S-Series, always among the thinnest in the category, has been plagued by build quality issues as well as weird features like the S5’s hideaway ports.

These nuisances are eventually addressed, however, and great laptops like the Aspire M5 can be the result. The Aspire S7 is the company’s third attempt at a premium Ultrabook, so maybe it’ll be another charmer.

Pricing starts at $1,199, which undercuts the debut price of the Aspire S5 by $200. Our review unit, which arrived with an upgraded Core i7-3517 processor and a 256GB solid-state drive, is priced at a lofty $1,649. Let’s see if Acer has built a laptop that can justify premium pricing.

Acer’s S5 stumbled partially because it had terrible aesthetics for a premium laptop. Thankfully, the S7 rectifies that problem. Although similar in size and weight to its predecessor, the chassis looks entirely different. Boasting a glossy white lid clad in glass that is framed by silver metal, the laptop has an unmistakable look that more than lives up to its intimidating MSRP.

Opening the lid reveals a more conventional silver metal interior. It remains classy, however, and is supported by excellent material quality. Considering that the S7 is less than half an inch thick, we were impressed by its non-gloss silver metal look, which felt expensive and durable.

Build quality could be better, however. Panel gaps on the lid are a bit large, and the underside is adorned with numerous screws that break up the laptop’s otherwise smooth appearance. Even a simple rubber cap placed over the screws would be a boon.

Port selection is limited. The right flank offers two USB 3.0 ports and a card reader, while the left includes mini-HDMI and a combo headphone/microphone jack. The rear of the laptop is devoted to cooling and leaves no room for any other ports.

Ultrabooks are known for having so-so keyboards, but this one is just bad. Its keys are small, smooth, and almost devoid of travel. Tactile feedback is barely present, and it can be difficult to feel the transition between keys while touch-typing. At least the backlight, which is soft green rather than harsh white, strikes the right balance.

A standard feature on all S7 models, users receive a touchscreen as a consolation prize. The laptop is not a convertible, though; it’s simply a standard touch-enabled Ultrabook, which means the touchscreen is rarely useful.

Some actions, like opening the Windows 8 Charms bar or switching between Metro apps, are more natural when used with the screen; but most menus are better with the touchpad. The high display resolution reinforces this. Many text links and buttons are too small (at default settings) to accurately activate via touch.

Using the touchpad feels natural, and multi-touch gestures generally work well. The touchpad is untextured, however, so we occasionally found our fingers moving outside its borders without our notice. We also disliked the integrated left/right buttons, and the click action feels hollow and cheap.

Acer has shipped its premium laptop with a premium display this time around. It boasts 1080p resolution and, in our testing, provided impressive results. It rendered 72 percent of the sRGB spectrum, provided excellent contrast, and posted great black-level numbers. Both media content and productivity software benefit from these traits.

The display’s maximum brightness is not as impressive as competitors like the Dell XPS 12 and ASUS Zenbook Prime, however, which turns its glossy coat into problem. Sunlit rooms can overwhelm the display, and any significant direct light – be it sunlight or a bright lamp – will make the laptop hard to use.

On a positive note, audio quality is robust. Heavy bass can just barely cause distortion when the laptop is at maximum volume. While a pair of external speakers would be best, audio is clear and loud enough to fill a small room, making speakers an optional accessory.

Thin laptops often have a problem with temperature ¬– but not the S7. We found that it warmed no more than 87 degrees Fahrenheit at idle and 101.5 degrees at full load. Thankfully, that temperature was also confined to a small portion of the laptop. These results are great for any Ultrabook, never mind one of the thinnest on the market.

But there’s usually a price to pay for having a cool laptop: fan noise. The laptop is nearly silent at idle, but even the slightest load (a website with Flash advertisements, for example) can cause the fan to kick in. If that load continues, the fan quickly ramps up to distracting levels of whirr. We recorded a maximum volume of 50.5 decibels, which is the worst result we’ve received from any laptop since we began testing laptop noise towards the end of October. Put simply, users who enjoy silence should stay away.

Battery life is another issue that can hamper a thin laptop, and the Acer S7 is no exception. Its small 4-cell battery has just three times the capacity of that in an average Android smartphone, which isn’t a lot of juice.

Despite this, the laptop offers useful portability. Our Battery Eater load test drained it in just 1 hour and 34 minutes, but our light-load Reader’s Test extended life to 5 hours and 35 minutes. The laptop lasted 4 hours and 9 minutes in Web browsing tests. Though these figures are below average for an Ultrabook, they’ll be good enough for the typical consumer.

Weight and size certainly won’t be an obstacle. As mentioned before, the S7’s profile is less than half an inch thick, and the laptop weighs in at less than three pounds. Tossing this laptop in a bag is a cinch, and its burden is barely noticeable.

Our tests also revealed the S7 to be easy on power. It drew as little as 9 watts at idle with the display at 50 percent brightness. Load increased that figure to 24 watts. Both numbers are in line with other recently tested Ultrabooks.

Acer doesn’t double-dip with bloatware on the S7. Though there’s plenty of it to be found in the Windows 8 start screen, those apps aren’t included on the desktop or on the taskbar. Users see bloatware once, and removing it from the start screen is easy enough.

That being said, users may not want to remove all of the pre-installed apps because some of them are actually useful. Rather than a bunch of impractical branded software, there are apps for Spotify, StumbleUpon, and Netflix, among others.

The laptop ships with the annoying McAfee Internet Security Suite, but with Windows 8’s built-in virus protection, users can disable the security suite and use that instead.

While the entry-level S7 comes with a Core i5 processor, our upgraded review unit arrived with a Core i7-3517. This processor proved quick in our testing, reaching a score of 44.1 GOPS in SiSoft Sandra’s Processor Arithmetic test, and a score of 7,622 in 7-Zip. Both of these numbers are about 20 percent better than the average Ultrabook.

Thanks to the combination of a powerful processor and a fast solid-state drive, excellent performance continued into PCMark 7 where the laptop scored 4,782. In regular use, the benchmark figures are reflected by fast, smooth performance. Programs load almost instantly, and even demanding apps can complete tasks quickly.

However, 3D performance remains a weakness. 3DMark 06 and 3DMark 11 returned respective scores of 4,646 and 583, which are low but on par with other laptops that don’t have a discrete GPU. The high display resolution also becomes an issue because some games won’t be playable at a resolution anywhere near native. This can result in gameplay having a stretched, blurry look, and even casual gamers should steer clear of the S7.

Acer’s S7 is sleek, sexy, and quick. It’s incredible that the company has managed to craft a laptop that performs so well while also keeping the chassis small, light, and attractive. The attention to detail is not on par with design leaders like Apple and Asus, but the broad strokes are as good or better. It’s refreshing to see a unique design.

We’ve mentioned before that we’re a bit tired of reserved brushed-aluminum laptops and would like a fresh look. The S7 delivers that. It also delivers an incredibly thin profile and low weight without compromising display quality or performance. Only a few quirks keep the laptop from ranking among the best Ultrabooks.

We just couldn’t look past two major issues. The first is the keyboard, which is the worst we’ve used in recent memory; and the second is the loud and aggressive system fan. These issues may not be deal-breakers for everyone, but both are easy to notice. Even consumers who don’t normally give these traits a moment’s thought should pause to consider them.

Intel Unison is yet another attempt to make PCs and phones work together
Nreal’s Air AR glasses head to the U.S., ready to rock with iPhones
Apple has a bunch of new products coming, but not this year
Twitter is building a menu option for Twitter Shops
AMD Ryzen 9 7950X vs. Intel Core i9-12900K: Two flagships face off
AMD Ryzen 7000 vs. Ryzen 5000: specs, performance, and more compared
AMD Ryzen 7000: Everything we know about Zen 4 CPUs
Apple’s October event may have been canceled before it began
Developer says it can turn your AMD 6800 XT into an Nvidia 3090 Ti
Best MacBook deals and sales for September 2022
Best gaming chair deals for October 2022
This new Windows 11 feature will help you protect your passwords
HP flash sale: Pavilion x360 2-in-1 laptop just got a $130 price cut