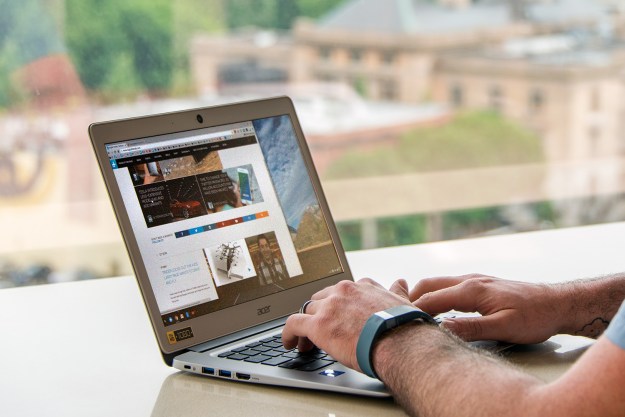 “Sturdy, portable, and powerful, the Acer Chromebook 14 is among the best Chromebooks we've tested.”

Not many Chromebooks can be called beautiful. Affordable? Sure. Portable? Often. But Chromebooks are almost exclusively budget systems, and design often falls by the wayside. Google tried to change preceptions with its Chromebook Pixel, but nobody wanted to pay $1,300 for a Chromebook, however nice it may be.

The $300 Acer Chromebook 14 may accomplish what the Pixel could not. With an aluminum alloy housing, and generously sized keyboard, this laptop looks way better than its price point suggests. The hardware, naturally, isn’t high-end, but its perfectly reasonable for a Chromebook. It has 4GB of RAM, which in our experience is just the amount for ChromeOS. There’s also a quad-core Intel Celeron N3160 processor clocked at 1.60 GHz, and 32GB of internal hard drive space.

There’s a lot of potential here, to be sure. But does the Acer Chromebook 14 stand up to everyday use, or do problems lurk beneath its metallic facade?

The Acer Chromebook 14 looks great in photographs. You’ll notice the aluminum housing, with its stylized streaks on the back. You’ll notice how thin it is, a mere seven-tenths of an inch when closed. And you’ll notice how the bottom of the laptop has that airplane wing curve towards the front, which makes it look even slimmer than it is.

Does it feel as premium as it looks? Not quite – it’s no slouch. The Acer Chromebook 14 feels way nicer than any $300 laptop deserves to. It’s remarkably solid, owing to its aluminum alloy body. The hinge is sturdy. And everything is well balanced, which means the Acer Chromebook 14 never feels unwieldy.

Still, there are a few design quicks. Pick it up, and you’ll feel a slightly sharp lip surrounding the bottom of the laptop. Handle the display too rough, and it will flex. Close the laptop and you’ll notice the display isn’t firmly shut, and can wobble a bit when the laptop is moved. These are minor annoyances, really. But they do give away the fact this notebook was built to a (very slim) budget.

Ports are typically scarce on thin laptops, and the Acer Chromebook 14 is no exception. There are two USB 3.0 ports, a full HDMI port, and a headphone jack. That’s it, beyond the plug for the power adapter.

This elegant Acer would look great at any price.

Disappointingly, there’s no SD or even MicroSD port, meaning there’s no convenient way to supplement the paltry 32GB of internal storage.

Bluetooth and Wi-Fi are offered by an Intel 7265NGW card, which offers IEEE 802.11a/b/g/n/ac connectivity for data and Bluetooth 4.2 compatibility for peripherals. This is quite strong for a Chromebook, as not all support Bluetooth, nevermind the latest standard.

Typing and tapping both feel great

We quite enjoyed typing on the Acer Chromebook 14’s keyboard, which is generously spaced and offers large keys. Typing was perfectly pleasant, though a little more feedback while typing would be nice. Considering how thin the laptop is overall, that’d be a lot to ask.

Like most Chromebooks, caps lock is replaced by search, and the delete key is nowhere to be found, but there’s nothing unusual about the layout so far as Chromebooks go. And users can change the Chrome-specific keystrokes, including the search key, in settings if they choose.

The Chromebook 14 offers no keyboard backlight. While we’d like to see that, backlighting is rare among Chromebooks, so it’s no surprise that it’s absent.

A generously sized multi-gesture touchpad, around four by three inches, leaves plenty of space for multi-touch gestures. Did you know that, in ChromeOS, a three finger swipe to the left or the right changes the current tab? We didn’t, but the Acer Chromebook 14’s touchpad was so large we found ourselves trying out gestures like that — and they worked consistently.

The 14-inch display offers 1080p resolution, which works out to 156 pixels per inch. That’s not bad at all, and it’s amazing to see a 1080p display in a system this inexpensive. Chromebooks have proven a leader in bringing full HD to low price points, and the Chromebook 14 is a part of that movement.

The Chromebook 14 has just the right amount of power for a Chromebook.

We found the display perfectly pleasant for day-to-day usage. Exploring some of the stunning default wallpapers that come with ChromeOS, the colors of landscapes were vivid, and stars were easy to make out. Text was always crisp. Watching the trailer for The Little Prince, the textures were easy to make out and colors during the day were vivid. It was perhaps a little harder to make out all of the details in the darker scenes, but the display is definitely better than normal for Chromebooks and budget laptops, in general.

If we have one complaint about the display, it’s the brightness. Using the system outside on a cloudy Portland day wasn’t difficult, but a bit more brightness could have made it a lot more pleasant. We’re not sure we’d want to use this display outside on a sunny day, should such a day ever happen here.

We were pleasantly surprised by the audio quality. The bass isn’t going to power a party, as with every laptop ever, but it’s enough to keep you grooving while you make dinner. External speakers are recommended for audiophiles, as always, but the audio here is above average.

Competent, but not a powerhouse

The Acer Chromebook 14 is powered by a quad core Intel Celeron N3160 processor clocked at 1.6GHz. The Celeron line is much less powerful than the Intel Core line most users are familiar with, and is optimized more for battery usage than performance. Having said that, this Chromebook worked well in our tests.

Standard benchmarks do not run on a Chromebook, which is just as well. Browser-only laptops aren’t intended for intensive tasks like video conversion or file decompression, but for simple things like email, Facebook, and editing the occasional Google Doc. The Acer Chromebook 14 feels plenty fast in these situations. Sure, loading 11 tabs from a poorly optimized website can slow things down for a bit, but once all those tabs are stored in the Chromebook’s 4GB of RAM, everything feels speedy once again.

Having said that, it’s not as though all Chromebooks are equivalent. We’ve seen some perform better than others, such as the Toshiba Chromebook 2 (2015) with its Intel Core i3 processor. The Acer Chromebook 14 did not, in our testing, offer the same buttery-smooth browsing experience that competitor offered, at least not when stressed out by a hoard of browser tabs. But it was miles ahead of the Lenovo Ideapad 100s Chromebook, which struggled with even basic browsing because it had only 2GB of RAM.

Graphics are handled by Intel HD 400. No one buying a Chromebook should expect a great gaming experience, but we fired up the browser version of FTL just to check. It worked played well, without slowing down the rest of the system, though our skills as a starship captain could use work. 3D games, on the other hand, are entirely hopeless. You’ll have to stick to the basics.

Take it anywhere, lasts all day

The Acer Chromebook 14 laptop weighs 3.7 pounds, which is far from the lightest laptop we’ve reviewed lately, but not exactly heavy, either. And at 0.7 inches thick, it won’t take up a lot of room in your backpack.

Of course, carrying a Chromebook with you is only useful if the battery holds up. The Acer Chromebook 14 sports a three cell battery rated at 3,920 milliamp hours. Acer advertises 12 hours of battery life, which if true would be remarkable.

Our Peacekeeper battery test results were more modest, showing seven hours and 31 minutes of life. That’s still an above average result for us, and suggests you can expect a full work day from this laptop on a single charge. Our web browsing loop, in which we load a number of popular sites every ten seconds until the battery dies, gave us an even better result — nine hours and 29 minutes.

No fan, not too hot

The Acer Chromebook 14 is fanless, so you’re never going to hear fans rev up during heavy usage. Still, the laptop never felt more than warm to the touch in our tests. A combination of an efficient processor and proper heat management seem to be doing their job here.

Acer offers a one year limited warranty for the Acer Chromebook 14, which is standard for a laptop.

You’ve seen the headlines: Chromebooks are outselling MacBooks. It’s a compelling narrative, but the fact is that MacBooks and Chromebooks are chasing entirely different markets. Even so, the Acer Chromebook 14 is a Chromebook that even discerning Mac fans won’t hate. Impressive, for $300.

The Acer Chromebook 14 delivers a great, well-rounded experience at a low price point. There are flaws, sure. An SD card port would be nice, considering the small internal hard drive, and the processor’s IGP can’t handle 3D games of any sort. But for the most part, the Acer Chromebook 14 hits all the right checkboxes. It’s a highly portable laptop with a great display, above-average keyboard and touchpad, and enough power to run ChromeOS smoothly.

We called last year’s Acer Chromebook 15 one of the best Chromebooks. They’ve done it again this year. For only $300, the Acer Chromebook 14 is a great value, and is a nice laptop regardless of price. This system should be on your list if you’re a fan of ChromeOS.