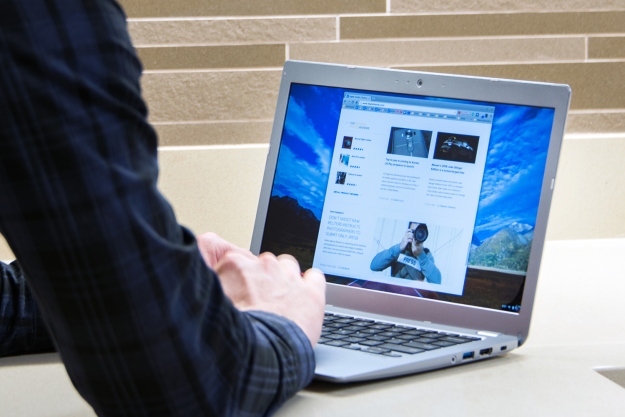 If there’s a running theme through Chromebook reviews, it’s “good enough.” Reviewers will mention that the processor is on the low end, that there’s not a lot of RAM, and then comment about how it’s not so bad considering the price – adding that you’re only going to be browsing the Web anyway.

That’s more-or-less what we concluded when we reviewed a Toshiba Chromebook 2 back in December of 2014. We enjoyed the feel of the laptop and loved having a Full HD display, but performance could become sluggish when trying to do more than one thing at a time. The newer 2015 CB35-C3350 version of the Chromebook 2, with an Intel Core i3-5015U processor and 4GB of memory, is clearly trying to solve that shortcoming.

Which leaves us wondering — is Toshiba’s latest Chromebook 2 better than “good enough?” And if so, is it worth the $380 price tag?

An attractive and sturdy design

Toshiba’s Chromebook 2 is an attractive laptop. The plastic case is colored silver, and the exterior’s texture gives it a unique look. You’re going to like the way light hits it from different angles. That same texture also feels great, and makes it unlikely the laptop will ever slip while picking it up.

When closed the laptop feels sturdy. Opening it is smooth, though two hands are needed – one to steady the laptop and another to lift the lid. The hinge feels good, though you can expect some wobbling when you first let go of it. These are minor complaints for what is, on balance, an attractive and functional design. You’re going to be happy showing this notebook off.

Connects to basically anything

Chromebooks don’t always offer much in the way of ports, but Toshiba’s CB35-C3350 Chromebook 2 is relatively generous. There are two USB ports, one USB3.0 for fast file transfers, and another USB 2.0 for external input devices and anything else that doesn’t need speed.

The keys are quiet, yet satisfyingly smooth.

The SD slot, which nests cards comfortably inside the device, gives options to anyone worried about the limited 16GB internal hard drive. 32GB SD Cards retail for under $20 at this point, meaning you can triple the device’s storage space for next to nothing, and 128GB cards can be found for not much more.

An included HDMI port means you can quickly hook this up to your TV or second monitor, which works without a hitch. Unplug your second display and ChromeOS animates the transition of any windows open on it to the primary display, which is a nice touch other OSes could benefit from. There’s also a standard audio jack.

The backlit keyboard looks transplanted from a MacBook Air, and feels almost as good. The keys are quiet, yet satisfyingly smooth. You won’t feel much of a click, but it also doesn’t feel muddy. There are a few Chromebook touches. The famous search button that replaces caps lock, for example, and the distinctive lower case lettering. Replacing the function keys with browser-specific buttons, like Back, Forward, and Full Screen, is a great move.

The multi-touch trackpad, at 4 by 2.75 inches, is generously sized and works smoothly. You can click the pad itself as a left-click, but right-click requires a two-finger tap. A three finger tap mimics a middle click, which is useful for opening a link in a new tab, while swiping two fingers left or right triggers the “Back” and “Forward” function of the browser, respectively. There’s no built-in support in ChromeOS for adding other gestures, which is unfortunate. It seems like this touchpad could be sensitive enough for all kinds of tricks with just a little more support.

A Chromebook with full HD display

This 13.3-inch Chromebook offers 1,920 x 1,080 pixel display, meaning it’s capable of Full HD playback. There’s a stunning assortment of built-in wallpapers intended to show off this resolution, featuring aerial images and landscapes, and they look beautiful. HD videos looked great in our tests, with smooth playback and strong, vibrant color. Looking through NASA’s Astronomy Picture of the Day was similarly stunning, and the IPS LCD screen meant viewing angles aren’t much of a problem until you get to extreme angles.

If you want a Chromebook that can keep up with twenty browser tabs, you’ve found it.

The range of visible colors was pretty good. Looking at the test images at lagom.nl we could see the greyscale value of 6 – not high-end monitor territory, but not bad for a laptop either. On the white side, 254 was visible. These scores mean the laptop is comparable with the version we reviewed back in December 2014, which makes sense given that it’s the same display.

There are down sides to Full HD on a 13-inch screen. Without tweaking, it can be hard to read your favorite websites. You can change the zoom settings in Chrome if this bothers you, but that will occasionally break site layouts a bit. It would be nice if some sort of system-wide scaling was offered.

The Skull Candy speakers are good for a laptop of this size. You’re not going to hear a lot of bass, of course, and they won’t replace a set of desktop speakers, but they’re above average for a laptop. They’re loud enough to listen to podcasts from across a room while cooking, but obviously won’t power a party on their own.

This Chromebook sports an Intel Core i3-5015U, which is considerably more powerful than the Celeron N2840 offered in the previous model. Our Peacekeeper benchmark results tell the whole story. The device scored 4,108, which blows away the Celeron model’s score of 1,568. This laptop actually has the highest Peacekeeper score of any Chromebook we’ve reviewed by a wide margin. Our previous leader, the Acer C720P-2600, scored 2,909.

All this means that pretty much anything you can do in a browser is going to run well on this Chromebook. We tried to slow it down by opening multiple tabs, including a few streaming videos, and playing the online version of FTL, all at once – but it kept working well. Only by trying to load 20 tabs of a poorly optimized site simultaneously did we notice a slowdown at all, but even that sorted itself out once everything loaded thanks to the 4GB of memory.

If you want a Chromebook that can keep up with your browsing habits, this is the best we’ve seen. It’s unlikely anything your day-to-day tasks are going to cause it much of a problem, so you can browse confidently.

Better performance comes at a cost, and the price is usually battery life. That’s certainly the case here.

Toshiba advertises the laptop’s life as “up to 8.5 hours.” We measured it using the Peacekeeper battery test, which loops the benchmark until the battery dies, and found the battery lasted four hours and 16 minutes. When we reviewed the Celeron version of Toshiba’s Chromebook 2, we received six hours and 22 minutes using the same benchmark.

Better performance comes at a cost, and the price is usually battery life.

This is because, despite the more powerful processor, Toshiba outfitted this device with the exact same battery as before, so there’s a direct a tradeoff: better performance for worse battery life. It’s worth noting this is some of the worst battery life we’ve seen in recent Chromebooks. This cannot be an all-day laptop without a power supply, but it’s still got enough juice for a few extended coffee shop work sessions, or an evening on the couch.

You shouldn’t have any trouble fitting this Chromebook into a messenger bag or backpack. It weighs less than three pounds, so you won’t notice it in your bag as you travel. And the textured case means it’s easy to get a grip on it while you’re pulling it out of your bag.

This is not a loud laptop. During the Peacekeeper benchmark, for example, we only occasionally heard the fan running. You can consistently get the fan running by opening a dozen heavy tabs, but it’s never loud enough to hear over any music you might be listening to, and usually quiets down quickly once everything loads.

Even after you stress it, the laptop will be more warm to the touch than hot. You can comfortably use it on your lap while working.

PNY Elite Performance 64GB High Speed SDXC ($34)
If you need more storage space than the 16GB that comes with this Chromebook, this 64GB card adds a whole lot.

AmazonBasics 13.3-Inch Laptop Sleeve ($11)
Protect your investment with this simple sleeve, which should fit snugly around your laptop.

Logitech Wireless Touch Keyboard K400 with Built-In Multi-Touch Touchpad ($20)
If you plan on using your Chromebook at your desk, or connected to your TV, it’s nice to have an external keyboard.

This Chromebook comes with a one-year standard limited warranty. You can add accidental damage service and another year of coverage for $68, and a total of three years for $100, but in either case the battery is only covered for one year.

If you’ve tried Chromebooks before, and thought they were too weak to use, this latest Toshiba Chromebook 2 is what you’ve been looking for. With the best Peacekeeper benchmark we’ve ever seen on a Chromebook, and rare slowdowns in our day-to-day usage tests, it’s more than good. It’s great! It feels like you’re using Chrome on a much more expensive laptop.

However, the fast performance harms battery life. Toshiba is also asking $380 for this notebook, which is toward the high end of pricing. The hardware is worth the price, but anyone turning to Chrome OS for its bargain pricing will be surprised.

Toshiba’s Core-powered Chromebook 2 shows what Chrome OS can do when it isn’t built on a tight budget. If Chrome OS is what you want, and you don’t feel like compromising (except on battery life), it’s a great choice.

Best 17-inch Laptop Deals: Get a large laptop for $330
Best Alienware Deals: Save on gaming laptops, PCs and monitors
Best MacBook Deals: Save on MacBook Air & MacBook Pro
The best color laser printers for 2023
The best Chromebooks for 2023
Best microSD cards in 2023: top picks for your computer, camera, or drone
The best game-streaming services for 2023
Ranking all 12 versions of Windows, from worst to best
If you think PCs are dying, you haven’t been paying attention
What is ChatGPT Pro? Everything we know about its response to capacity issues
I built a couch gaming PC that puts the PS5 to shame — and you can too
AMD Ryzen 7000: availability, pricing, specs, and architecture
ChatGPT: how to use the viral AI chatbot that’s taking the world by storm