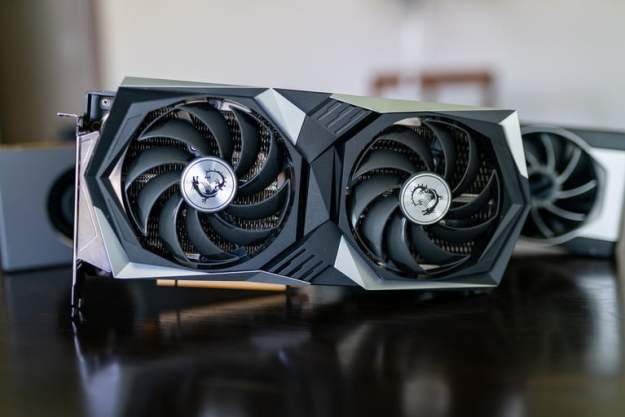 Budget and 1080p gamers haven’t had a lot of graphics card options over the past several months, and AMD’s new RX 6600 XT is looking to solve that problem. It’s a card capable of delivering smooth 1080p gaming at high refresh rates, and it uses a cut-down core to help alleviate some supply issues. But its price stretches the definition of what it means to be a budget graphics card.

Below $500, AMD could have priced the RX 6600 XT just about anywhere and still sell cards like there’s no tomorrow. At $379, it nestles into a comfortable place between the Nvidia competition, and if you can grab one at launch for list price, you won’t find another card that performs as well for the cost.

But should you? $379 is an attractive price given the current market conditions, but the RX 6600 XT still needs to stack up the competition once the launch boom is gone. The Radeon RX 6600 XT is a solid card, but it’s flanked by two excellent cards from Team Green that give it a run for its money.

AMD isn’t releasing a reference design for the RX 6600 XT, so you’re limited to options from board partners. For this review, I got my hands on MSI’s RX 6600 XT Gaming X card, which uses a traditional dual-fan design.

AMD has shared designs from other partners, some of which include three fans, but most should come with two. Regardless of the model, the RX 6600 XT uses a single 8-pin power connector and requires a 500W power supply at a minimum.

My unit measured 10.88 inches long, accounting for the slightly protruding shroud. Every model is a little different — especially the triple-fan ones — so make sure to check before picking one up. A standard dual-fan design shouldn’t be longer than the length of an ATX motherboard (12 inches).

Throughout testing, the card stayed cool, peaking at around 62 degrees Celsius in Cyberpunk 2077. It’s important to mention that I tested inside a Be quiet! Dark Base Pro 900 rev. 2, which is a full tower chassis with a little extra room for cooling. Your mileage may vary.

A welcome feature on my review unit was a backplate, which is something the competing RTX 3060 I tested lacked. At least one board partner design has a backplate based on the images AMD provided, but that may not be true for all designs.

The RX 6600 XT builds on AMD’s existing RDNA 2 architecture, which we have already seen in action time and again. However, it’s built using the Navi 23 GPU core, which is otherwise only available in AMD’s workstation-class Radeon Pro W6600 and W6600M. This is the Navi 23’s debut for the consumer desktop crowd.

An important thing to note about Navi 23 compared to previous versions: It’s much smaller. That means AMD can squeeze more GPU dies onto a wafer, which should help supply. It’s still built using chipmaker TSMC’s 7nm node, but with a smaller size, AMD is able to crank out more chips with each manufacturing pass.

Regardless, Navi 23 is built on AMD’s existing architecture, so we can draw plenty of comparisons to the rest of the range. Compared to the next step up, the RX 6600 XT sheds around 20% of the compute units (CUs) for a 20% difference in price. That would make sense with all other specs equal, but they’re not. The RX 6600 XT matches the boost clock speed of the RX 6700 XT, but it comes with 4GB less GDDR6 memory.

The RX 6600 XT shows a decent value compared to similar gaps in the range.

Still, it’s better than some other steps in the range. Moving down from an RX 6800 to an RX 6700 XT, there’s about a 20% price difference for a 40% difference in CUs — and that step also drops 4GB of . At least by AMD’s own lineup, the RX 6600 XT shows a decent value compared to similar gaps in the range.

There isn’t much of a reason to draw comparisons to Nvidia on the specs front — I’ll dig into the better brand in the upcoming sections. However, it’s important to point out the price of the RX 6600 XT compared to the competition. At $380, it’s sandwiched between Nvidia’s RTX 3060 at $330 and the RTX 3060 Ti at $400.

The RX 6600 XT is targeting 1080p, high refresh rate monitors. And based on my average frame rates, it hits that mark well. Across the five non- games I tested, it averaged 117.6 frames per second (fps), making it a great option for 1080p with a 144Hz refresh rate. The 1440p performance is only slightly worse with an average of 86.6 fps.

1440p showed similar results, though with a larger 18% difference between the RTX 3060 Ti and RX 6600 XT. The RTX 3060 and RX 6600 XT were much closer with only a 6% difference. Of course, averages like this don’t tell the full story, so let’s walk through some individual tests for a clearer picture.

I tested the RX 6600 XT with a machine rocking an Intel Core i9-10900K, 32GB of , and an Asus Tuf Z490-Plus motherboard. All of my tests were run off a Crucial MX500 2TB hard drive with the latest version of Windows 10. Unfortunately, I didn’t have an AMD processor to test Smart Access Memory, but you can expect a boost of 5-10% in supported games if you have a recent Ryzen processor.

AMD made good on its promise to deliver 1080p gaming with high frame rates.

Still, AMD made good on its promise to deliver 1080p gaming with high frame rates, even if there are some slightly better options from Nvidia at list prices.

Gaming is the focus on the RX 6600 XT, so it’s not surprising that the card takes a backseat when it comes to content creation. Here, I ran tests using Blender’s benchmark and PugetBench for Premiere Pro. The RX 6600 XT is capable of running both programs, but there might be a better option if you’re focused on them more than gaming.

In Blender, I ran three test renders and averaged the times. The RTX 3060 Ti unsurprisingly leads with support for CUDA and OptiX rendering in Blender. The RX 6600 XT still managed to beat out the RTX 3060, however, with about an 11% difference between them. Still, the RTX 3060 Ti and RX 6700 XT showed a clear lead.

PugetBench for Premiere Pro favored the Nvidia cards even more. The RX 6600 XT scored last with an overall score of 625, while the RTX 3060 Ti scored 807. Keep in mind that PugetBench takes into account a bunch of functions in Premiere Pro, so the final score isn’t solely on the shoulders of the .

I was surprised to see the RX 6600 XT show up a bit in my Blender test, but overall, it’s not a great card for content creation. It’s powerful enough to function in apps like Blender and Premiere Pro, but if you use these applications a lot, Nvidia still holds the lead.

Normally, Nvidia would have a clear lead over AMD with Deep Learning Super Sampling (DLSS) and . That’s not the case for this generation. The RX 6600 XT also comes with hardware-accelerated , and it has access to a DLSS-like feature in the form of FidelityFX Super Resolution (FSR).

I took to Control and Cyberpunk 2077 to test . I ignored DLSS for all of the tests to see how the RX 6600 XT would hold up in a fair battle. True to other cards in the RX 6000 range, it fell clearly short of the Nvidia competition.

In Cyberpunk 2077, the RX 6600 XT showed about a 79% drop when moving from the Ultra preset to the Ultra RT preset, while the RTX 3060 only showed a 53% drop. Keep in mind this is with DLSS off. Even without an upscaling advantage, Nvidia’s RTX 30-series cards handle better than the RX 6000-series.

1440p Ultra RT was unplayable across all the cards I tested. For reference, the RX 6600 XT averaged only 3 fps in this mode. The top-performing card, the RTX 3060 Ti, averaged only 23 fps.

is demanding regardless of the hardware you use it on, but Nvidia’s cards can still handle the heat better than AMD’s.

The difference here makes sense. Nvidia uses dedicated ray-tracing cores, while AMD opts for a “ray accelerator” packed into each compute unit. is demanding regardless of the hardware you use it on, but Nvidia’s cards can still handle the heat better than AMD’s — and the RX 6600 XT doesn’t change that.

In the case of an Nvidia card, I’d point to DLSS as a way to boost performance. AMD has an alternative in the form of FSR, but Nvidia usually bundles with DLSS, while FSR is a little all over the place. That could change down the line, but Nvidia’s cards still have the best set of features for .

As my tests show, you really need an upscaling feature to run at playable frame rates. AMD has that feature now in the form of FSR, but many popular titles — Cyberpunk 2077 and Control included — don’t support the feature yet.

Still, FSR is available to you with the RX 6600 XT. As we found in our FidelityFX Super Resolution review, it’s a very capable upscaling feature that can seriously improve your frame rates. The image quality isn’t quite as good as DLSS, but the differences are easy to forgive once everything is up and running.

In a perfect world with list prices and GPUs on store shelves, I’d certainly recommend the RTX 3060 Ti over the RX 6600 XT. It’s only $20 more expensive and almost universally performs better. The RX 6600 XT is slightly overpriced at $380 — given its performance, it should clock in closer to $350. However, an extra $30 is hard to argue with given how expensive are right now.

A lot of this is going to come down to what card you can find, and for what price. At launch for list price, the RX 6600 XT is a slam dunk given the going rate of . Once the initial stock is gone, you should slot the RX 6600 XT in between the RTX 3060 Ti and RTX 3060 in terms of performance and take the asking price from there.

The other alternative is the RX 6700 XT, which outclasses even the RTX 3060 Ti, though at a premium.

The RX 6600 XT should last for the next several years for 1080p gaming. If you want to use features like or upgrade to a higher resolution, you will probably feel the weaknesses of the RX 6600 XT within a few years.

Yes. The RX 6600 XT is about $30 too expensive, but it’s still much cheaper than any other card you can buy right now. If you miss the launch boom, however, consider upgrading to the RTX 3060 Ti instead if you can find it for a decent price.