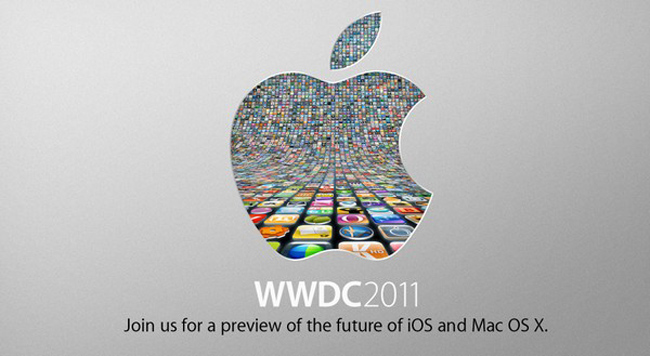 When a company called Apple uses an apple as its logo, it won’t come as too much of a surprise that the logo for its forthcoming iCloud music service is of – you guessed it – a cloud. The cloud in question has been spotted at San Francisco’s Moscone Center West, where the final preparations are being made for the Cupertino company’s annual Worldwide Developers Conference (WWDC). The gathering kicks off on Monday and runs for the whole week.

Apple Insider has had its face pressed up against the window of the building and in the process spotted a large banner in the lobby. On the banner are three logos – one for the forthcoming Lion operating system for Mac PCs, another for the latest version of its mobile operating system – iOS 5, and one for its cloud-based music offering – iCloud. As for the cloud, well, it looks a bit on the cumulus nimbus side, and consists of a simple black outline on a silver background. It’s nice to be able to finally put a face to a name.

After months of speculation, Apple finally confirmed the name of its new cloud-based service on Tuesday, together with news that Steve Jobs, who has been on medical leave since January, will be making an appearance at next week’s conference, possibly to deliver the keynote address.

Earlier today it was reported that Apple had signed a deal with the last of the four major music companies, Universal Music, giving the green light for the launch of iCloud next week. Deals have already been struck with Sony, EMI and Warner Music Group. Details of the forthcoming cloud-based music service, such as whether consumers will have to pay to use it, are currently scant, but all will no doubt be revealed next week.

Apple’s iCloud offering will line up alongside similar existing services from Google and Amazon. Those two companies, however, have not yet signed deals with the music companies, which has left them somewhat restricted in what their respective services can offer consumers. Users of their services, for example, have to spend time loading their music onto remote servers, whereas it’s thought that, thanks to the deals with the music companies, users of iCloud will simply have their hard drives scanned thereby allowing users to access digital copies of their music on Apple servers.

Topics
Today’s Best Deals: Apple iPad, Xbox Series S, and more
iCloud might be sending your photos to strangers’ computers
Apple slashes trade-in values for its iPhones and more
Windows 11 will now work more seamlessly with Apple iCloud
Get this Asus gaming laptop with an RTX 3060 while it’s $400 off
All of Samsung’s videos from today’s Galaxy Unpacked event
Best 2-in-1 laptop deals: Save on Dell, Lenovo, HP and more
The best USB-C cables for 2023
Apple just found a bizarre way to make virtual keyboards less annoying
Forget the MacBook Pro 16: Dell XPS 15 is $400 off right now
This popular HP laptop just got a big price cut — now $270
This 8K monitor has 3D tech that can be viewed from all angles
Microsoft continues its unabashed embrace of ChatGPT and AI