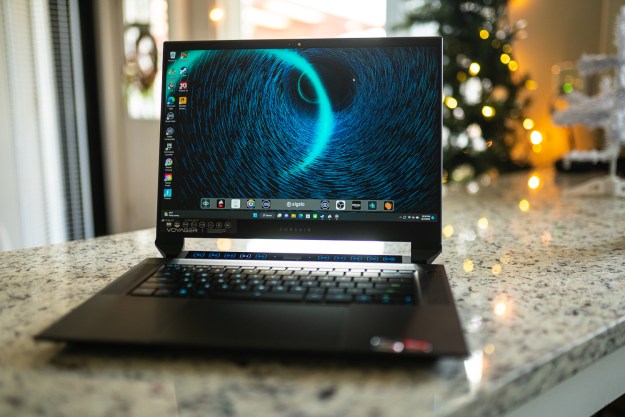 “The Corsair Voyager a1600 throws caution to the wind with its features -- and makes me appreciate that other laptop vendors don't.”

The Corsair Voyager a1600 is a kitchen sink gaming laptop. Integrated Elgato Stream Deck? It’s the defining feature of the a1600. A mechanical laptop keyboard developed with Cherry? It’s here. The Voyager a1600 even includes a dual-zone trackpad that allows you to turn off half or all of it while you’re gaming. It’s everything you didn’t know you wanted in a laptop, at least on paper.

Corsair’s first gaming laptop is an example of what you could do, but there’s a reason the best laptops focus on what you should do. Although the Voyager a1600 is a gaming powerhouse with some useful goodies, it falls behind in other categories, all while its eclectic feature set bloats the price compared to similar laptops.

The Voyager a1600 looks nice, fitting in with the more minimalist approach Corsair has taken with its products over the past few years. Despite being a 16-inch laptop, the a1600 is just under 0.8 inches thick, even thinner than Alienware’s Alienware x17 R2. However, the thinness isn’t paired with the clever thermal solution of a machine like Asus’ ROG Zephyrus M16, causing the fans to get uncomfortably loud in games and even occasionally ramp up while the laptop is closed.

You have three options for fan speed, so you can tune the noise to a more comfortable level. None of them make the machine too hot like the aluminum-encased Razer Blade 15, either. Still, Corsair has the a1600 tuned to provide maximum performance out of the box at all costs. That includes the power settings in addition to fan speed, causing it to drop battery 25% faster than the Ryzen 7 6800HX-equipped Lenovo ThinkBook 16p Gen 3 (and the Lenovo laptop has a smaller battery).

AMD’s SmartShift Eco, which switches to integrated graphics to preserve battery life, is turned off by default. You’ll want to turn it on if you plan to keep the Voyager a1600 away from a charger for too long.

This wouldn’t normally be such a hurdle, but Corsair splits the settings for the a1600 across a range of software. Fan and some general system settings are within Corsair iCue, but features like the Eco mode are in Radeon software. Similarly, your Stream Deck color and center display settings are in iCue, but the actual assignments are in a separate Stream Deck app (the webcam also has its own dedicated app).

These apps all come together in the Voyager Hub, which only serves to link out to the other apps installed on your system. At any given time with the Voyager a1600, you’ll have three or four of Corsair’s apps running in the background.

You’ll usually have to dig through several apps to find settings that should be clicks away.

To its credit, Corsair is dealing with a lot of disparate features that are hard to unify under one piece of software. You have the built-in Stream Deck, of course, but also an integrated Corsair Slipstream Wireless module to connect peripherals like Corsair’s Sabre Pro Wireless mouse without a dongle, which is a great feature to free up USB ports.

Still, you’ll usually have to dig through several apps or get around the complicated (but very powerful) iCue to find settings that should be a couple of clicks away.

The Novelty of a Stream Deck

The Cherry-designed keyboard doesn’t live up to the hype, unfortunately. I’ve never met a Cherry laptop keyboard I’ve liked (read my MSI GT77 Titan review for another example), and the Voyager a1600 is no different. The travel feels unnecessarily long and Cherry’s mechanism is prone to hang-ups. I’d take a quality membrane keyboard any day.

The trackpad is a different story. It’s large at 3.9 inches tall and 6.1 inches wide and comfortable to use. It includes two capacitive areas that let you turn off the trackpad, which is the feature that mainly stands out. Double-tapping the left turns off the whole trackpad while double-tapping the right turns off just the right side (there are even indicator lights to tell you). It’s great to avoid slipups while you’re typing or gaming, but I’m puzzled by the fact you can’t turn off the left side where your wrist rests while using the WASD keys.

The Stream Deck isn’t just for streamers. It’s a useful and often novel feature to have.

Corsair’s Stream Deck integration is a high point, too, proving far more useful than the Touch Bar on the MacBook Pro (rest in pieces). It can do everything a normal Stream Deck can do; playing audio clips, launching apps, starting a voice mod — the list is endless. The Stream Deck is so impressive because of its robust plugin ecosystem, though, which is available with the Voyager a1600.

You can set dedicated buttons for settings in OBS, on Twitch, in Discord, and with far more apps through the integrated plugin browser. The Stream Deck isn’t just for streamers. It’s a useful and often novel feature to have.

Great for gamers, bad for creators

Despite showing middling gaming performance in synthetic benchmarks, the Voyager a1600 can hang with RTX 3070 Ti-equipped laptops like the Lenovo Legion 5i Pro in real games. At the native 1600p resolution with max settings, you can achieve above 60 frames per second (fps) in games like Assassin’s Creed Valhalla. More demanding titles like Red Dead Redemption 2 call for a resolution drop. At 1200p, the Voyager a1600 averaged 63 in the game.

Oddly, Cyberpunk 2077 showed a massive boost going down to 1200p, with the Voyager a1600 offering a 73 fps average over its disappointing performance at 1600p.

The RX 6800M is an impressive GPU, but it misses out on features like Nvidia’s Deep Learning Super Sampling (DLSS) that are available in most other gaming laptops (most gaming laptops carry Nvidia cards). The AMD Advantage, which is branding that notes an AMD CPU and GPU in a laptop, only shows up in some games like Assassin’s Creed Valhalla, and it’s not compelling enough to want an all-AMD rig over the much more common Intel/Nvidia configurations.

The Voyager a1600 trades blows well with its all-AMD configuration in games overall, as it does in general processor performance. Intel’s processors still hold a single-core lead, but the eight full, fat cores on the Ryzen 7 6800HS help accelerate multi-core tasks like video encoding.

The Voyager a1600 loses out in the graphics department outside of games, though. The Lenovo ThinkBook 16p Gen 3 is proof that AMD’s mobile processors are very close to Intel. It’s also proof that AMD’s graphics cards are far behind in creative apps like Premiere Pro where the GPU plays a vital role. Even the RTX 3060 in Lenovo’s laptop, which is in a far lower class than the RX 6800M, puts up nearly double the result when paired with a slightly more powerful processor.

It’s a shame, too, because the Corsair Voyager has a screen worthy of apps like Premiere Pro. It’s a 16:10 240Hz screen with support for FreeSync Premium, so it’s up to the task of gaming. To my surprise, the display is up to the task of content creation, too. It covered more than 100% of the sRGB spectrum and registered a color error of less than 1. You could do color work on this display without problems. The only downside is the brightness, with the panel topping out at 339 nits on my SpyderX.

Is the Corsair Voyager a1600 worth it?

Although I appreciate Corsair daring to do something different in a market of stale laptops, the combination of features doesn’t add up to justify the Voyager a1600’s launch price. It started at $2,700, but Corsair has since brought the price down to $2,000.

It’s cheaper than alternatives like the Razer Blade 17 and Alienware x17 R2, and the Voyager even carries some premium features of these machines like a 240Hz display and mechanical keyboard. Even those extras don’t bridge the gap compared to cheaper machines like Lenovo Legion 5i Pro and Asus ROG Zephyrus M16 that always match and occasionally exceed the performance of the Voyager a1600.

Extras like the Stream Deck and integrated Slipstream circuit are nice to have, but I never found them essential during my few weeks using the Voyager a1600. You can do without them, though the Voyager did tempt me to spend $100 on an external Stream Deck.