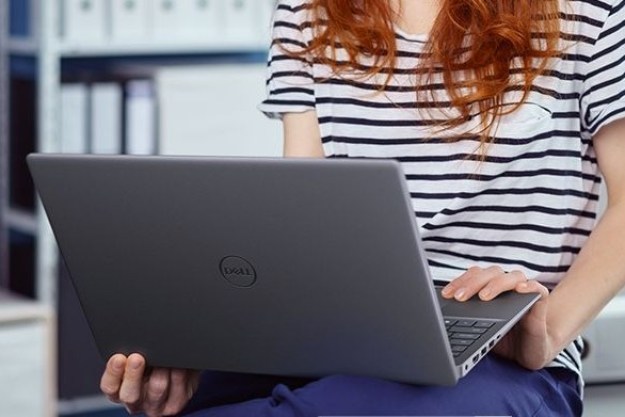 “The Inspiron 15 7000 isn't anything fancy, but its expandability makes this midrange laptop stand out.”

Laptops are nowhere near as upgradeable as they used to be. Whether it’s battery, memory, or storage, you’re stuck with whatever you buy — so you better buy one of the best laptops for you.

There are some rare exceptions to this trend. One is Dell’s latest Inspiron 15 7000 model. Instead of being soldered on, this Inspiron has easily accessible RAM slots and additional connections for a second PCIe M.2 SSD and even a 2.5-inch drive.

Does this laptop’s upgradeability set it apart from the very crowded field of excellent 15-inch laptops?

The Inspiron 15 7000 is a “midrange” laptop, but that doesn’t mean it’s not well-built. The model I reviewed is crafted from stamped aluminum, which is a nice upgrade over the 7590 that uses magnesium alloy. That makes the 7591 solidly built for a laptop of this price, with no significant bending or flexing in the lid, keyboard deck, or chassis.

That’s important for a laptop you’re meant to open up. The ability to expand is not just a feature for tinkerers. You can save money upgrading it yourself, and you can even extend the life span — so long as you’re willing to dig in a bit.

Flip the laptop over, and you’ll find standard Phillips screws (no hex screws requiring special tools). Remove those (the rear three can just be loosened and remain in the chassis), and you can carefully snap off the cover and reveal the insides.

You can save money upgrading it yourself, and you can even extend the life span.

There, you’ll find two RAM slots, a second M.2 PCIe slot for an SSD, and a 2.5-inch bay for a third drive. When you have a single stick of RAM installed, you’re running in single-channel memory mode, and that has a significant impact on performance. Plug in a second matched module and you switch into dual-channel mode for significantly faster memory performance.

Add a second M.2 SSD and you can configure RAID 0 (striping) or RAID 1 (mirroring) for either better performance and more storage or redundancy and more reliability. Finally, you can add a third drive in the 2.5-inch format for additional storage.

As we mentioned already, that’s an unusual level of access and upgradeability for an ultrabook. You have to jump to an expensive premium laptop like the Lenovo ThinkPad X1 Extreme Gen 2 to find a laptop that allows you to add a second SSD with RAID support. Some other laptops like the Dell XPS 15 let you swap out the RAM and (single) SSD, but the Inspiron is the only laptop in its class that lets you add up to two additional drives.

Surprisingly, even though the Inspiron 15 7000 is uniquely expandable, it’s not overly large or heavy. It comes in at 4.12 pounds, which is lighter than the XPS 15’s 4.5 pounds but heavier than the ThinkPad’s 3.76 pounds. At 0.78 inches thick, the Inspiron is a bit thicker than some of the more premium models, but not by much. You’re not stuck lugging around a bulky laptop just to gain some upgradeability.

Connectivity, which also impacts how well you can outfit a laptop, is very good. You get three USB-A ports, a USB-C port with Thunderbolt 3 support, a full-size HDMI 2.0 port, and a microSD card reader. Plug into a Thunderbolt 3 dock and you can connect to multiple 4K displays and a host of other peripherals. Wireless connectivity was a step behind, though, with just Wi-Fi 5 instead of the newer Wi-Fi 6 standard to go with Bluetooth 5.0.

I ran our usual performance benchmarks before adding a second 8GB RAM module, and performance was — as expected — disappointing.

The upgrade didn’t have as much impact on our more real-world testing. In Handbrake, I encoded a 420MB video to H.265 to test content creation performance. Prior to the upgrade, the Inspiron took a full 3 minutes to finish the test; afterward, it took two minutes and 50 seconds. The Lenovo C940 took 2 minutes and 17 seconds.

So, adding the second RAM module and switching to dual-channel mode increased performance in Geekbench by 12% and brought the laptop up to speed with its competition. The increase was only around 6% in the Handbrake test. The memory I purchased was by Crucial, a single stick of 8GB DDR4-2666MHz RAM that only cost around $30. That makes this one of the less expensive performance upgrades I’ve seen in a while.

Looking at SSD performance, I didn’t notice a difference with the RAM upgrade. The Western Digital PCIe offered up average performance that’s similar to the Intel Optane-equipped SSD in the Lenovo Yoga C940 and well behind the much faster SSDs in the XPS 15 and the ThinkPad X1 Extreme Gen 2.

However, add a second SSD and configure RAID 0 and you’ll see storage speeds increase significantly. That’s another performance upgrade that’s quite unusual for ultrabooks and that only the Lenovo matches.

The upgradeability is nice, but the Inspiron still needs to function well as a laptop. The good news is that in most regards, it’s a solid offering.

The keyboard is comfortable, with plenty of travel and a snappy mechanism. It’s not quite up to the level of the keyboard of ,ore expensive laptops like the XPS 15 and HP Spectre x360 15, or the new MacBook Pro 16‘s Magic Keyboard, but it’s good enough for fast typing.

The touchpad is also above average, with plenty of space for a Windows 10 touchpad (nothing like the massive version on the MacBook, though) and support for Microsoft Precision touchpad drivers. Windows 10 multitouch gestures work just fine, and it’s a pleasure to use.

Next up is the display. At 15.6 inches, Full HD is a little less sharp than I prefer. For me, 1440p or 4K is a much-preferred resolution for these larger panels. However, the screen that Dell selected for the Inspiron won’t bother you in daily usage. It’s plenty bright at 323 nits, though contrast only hit 820:1. That’s below the 1000:1 threshold we like to see.

The color gamut was average at 74% of AdobeRGB and 98% of sRGB, but color accuracy was unsatisfactory at 4.52 (1.0 and below is considered excellent). You shouldn’t depend on this laptop for making precise photo edits.

The panel on the Lenovo Yoga C940 was similar, with better contrast and color accuracy but slightly less impressive color accuracy. If you want a more finely tuned panel for colors, you’ll have to upgrade to a laptop like the Dell XPS 15 and Lenovo ThinkPad X1 Extreme.

Finally, battery life matters as well, and here’s where you make a real compromise for the extra storage option. If you opt for the 2.5-inch drive bay, then you’re limited to a 56 watt-hour battery — like the one in my review unit. If you give up that bay, then you can fit in a 97 watt-hour battery, similar to the XPS 15.

That had a negative impact on battery life. The Inspiron fell behind the Lenovo Yoga C940, for example, by an hour in our web browsing test at right around 6 hours and in our video looping test at just under 10 hours. However, the Inspiron did surprisingly well in our demanding Basemark web benchmark test at 4 hours and 40 minutes, well over an hour longer than the Yoga.

My review unit was equipped with an Nvidia GeForce GTX 1050 rather than the GTX 1650 that’s an optional upgrade. The GTX 1050 was quite popular just a year or two ago, and it provides a passable experience playing casual games and modern titles at lower resolutions and graphical detail.

I ran our usual suite of gaming benchmarks and the Inspiron performed in line with other laptops running the GTX 1050. I saw 52 frames per second (FPS) in Fortnite at 1080p and high graphical detail, and 41 FPS at Epic. Meanwhile, the Inspiron managed 77 FPS in Civilization VI at 1080p and Medium detail, and 40 FPS at Ultra.

This is not a dedicated gaming laptop, so be prepared to drop the resolution and graphical detail.

In a heavier game like Assassin’s Creed Odyssey, the Inspiron hit 32 FPS at 1080p and High detail, and dropped to an unplayable 17 FPS at Ultra High detail. Overall, these results average about 10-15 FPS less than laptops equipped with the newer GTX 1650, including the Dell XPS 15 and the Asus ZenBook 15 UX534. If you plan on gaming more on this laptop, you’ll want to upgrade to that faster card.

The Inspirion 15 7591 can handle itself for casual gaming and can even get by in modern titles. But this is not a dedicated gaming laptop, so be prepared to drop the resolution and graphical detail for the best experience.

The Inspiron 15 7000 is a uniquely upgradeable ultrabook. Its ability to add two storage drives is more than almost any laptop I’ve reviewed. DIY enthusiasts will love it from a conceptual level, but it’s throwback to a time when laptops could last more than just a few years.

Unfortunately, Dell’s configurations are confusing. The 7591 model I reviewed came with only a single RAM module and the older GTX 1050 is a bottleneck on gaming. You can opt for the 7590 model with its GTX 1650, but it only allows you to add one extra drive.

Whether you opt for the $800 base model or something with discrete graphics, the Inspiron 15 7000 makes for a balanced midtier laptop.

Yes, there are several 15-inch alternatives, though there aren’t many at this price range. HP’s Envy 15 is out of date, as is Asus’ ZenBook 15. The Surface Laptop 3 15-inch uses weaker quad-core processors, as does the LG Gram 15.

Dell’s XPS 15 offers a sturdier chassis, faster performance options, and a better screen. It’s around $300 more expensive for the same specs, though the XPS can configured much higher. The Lenovo ThinkPad X1 Extreme Gen 2 comes close to matching the Inspiron’s expandability and can also be quite a bit faster, but it’s twice as expensive.

If you want to consider a 2-in-1, the Lenovo Yoga C940 15 is a good option. It’s a bit faster atn gaming than the Inspiron and is about $500 more expensive. It doesn’t feature have Dell’s expandability, either.

The Inspiron 15 7000 is built well and feels like it should last as long as you’ll need it. The ability to easily pop open the chassis and upgrade components means that you can add more RAM and storage as your needs grow. That means the Inspiron should last you a bit longer than your average laptop.

The 1-year warranty is industry standard and, as always, disappointing.

Yes. It’s a solid laptop for the price, and the expandability features are a plus.

Topics
Best Gaming PC Deals: Save on RTX 3070, 3080, 3090 PCs
Apple just found a bizarre way to make virtual keyboards less annoying
Best 2-in-1 laptop deals: Save on Dell, Lenovo, HP and more
All of Samsung’s videos from today’s Galaxy Unpacked event
Forget the MacBook Pro 16: Dell XPS 15 is $400 off right now
This popular HP laptop just got a big price cut — now $270
This 8K monitor has 3D tech that can be viewed from all angles
Microsoft continues its unabashed embrace of ChatGPT and AI
Don’t fall for this Mac Mini M1 deal — buy this instead
No, AMD CPUs and GPUs won’t get cheaper — the CEO reveals why
Don’t miss this Samsung Galaxy Book 3 Ultra pre-order deal
Experts fear ChatGPT will soon be used in devastating cyberattacks
Lenovo’s Surface-style Chromebook just got a big price cut