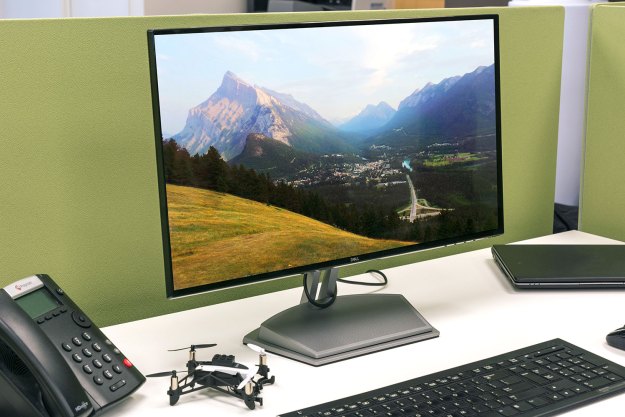 “The Dell S2418H is among the best monitors in its class.”

Searching for the right monitor takes patience. For other products like laptops, smartphones, keyboards, mice, it’s easy to narrow the field with just a few glances at product shots. For monitors, it’s a little trickier.

Monitors in the same category tend to share design elements, specifications, and even model numbers. Too often we go with size and resolution to pare down our options. That’s why it would be easy to overlook the Dell S2418H. On paper it’s nothing special, just another 24-inch 1080p desktop monitor. But hiding behind the numbers is something else special.

It’s important to point out that the Dell S2418H is a budget monitor. It runs about $240, but you can probably snag it for less by shopping around. Monitors in this price bracket tend to prioritize savings and reliability over design and aesthetics, which is a shame, considering a monitor’s job is to be looked at.

Thankfully, Dell did no such thing with the S2418H.

The Dell S2418H is one of the most attractive monitors in its class, full stop. With razor-thin bezels, a solid aluminum stand, and slick glossy finish, the monitor’s design puts its nearest competitors to shame. The S2418H even eclipses more expensive monitors like the LG Ultrafine 5K, a $1,300 monitor marred by massive, lopsided bezels. Looking at closer competitors, the S2418H has slimmer bezels than the Samsung CF591 and CFG70, and a more visually interesting stand than the Dell S2417DG.

By opting for a solid metal stand in lieu of the typical thick plastic stand, Dell upped the ante a bit, and made a potentially forgettable monitor into a very classy addition to any desk space.

There’s one aspect that is a bit cumbersome, however. The S2418H ships with an external speaker which fits neatly into a little cradle in the base. Without the speaker, the monitor possesses a certain minimalist charm. Placing the speaker into the base spoils the effect. It doesn’t detract from the Dell InfinityEdge display’s narrow bezel profile, but it looks a little out of place, like a bumper sticker on a luxury car.

Unfortunately, the Dell S2418H does suffer from a bit of the unremarkable sameness that pervades the desktop monitor market. It’s right there on the back of the monitor, which is to say, the Dell S2418H features a standard array of ports.

It features a VGA port and two HDMI ports, one for each flavor — HDMI 1.4 and 2.0 are represented here. It also sports a pair of audio ports, as well as a port for the included external speaker.

The S2418H has about the same number of ports as the Samsung CF591, plus an extra HDMI port, so it’s not unusual for monitors in this price category to be stingy with ports.

It’s a little disappointing that there isn’t at least one USB Type-A or USB Type-C port, but it’s a minor issue. Similarly, a DisplayPort would’ve been appreciated, but otherwise the usual suspects are here, and they do their jobs admirably.

Another small issue dampened our praise — the physical buttons on the underside of the display were just slightly mis-aligned. For instance, when the on-screen menu pops up, it has little menu buttons that line up on the bottom edge of the display.

The aluminum stand and razor-thin bezels make this monitor a classy addition to any desk.

The on-screen buttons were just slightly to the left of the actual, physical, buttons they corresponded to. It wasn’t a huge problem, just a bit irritating when you’re trying to adjust settings and accidentally close the menu instead of turning up the brightness. Otherwise, they were responsive, and got the job done.

The menus themselves are clean and easy to navigate. It’s quick and painless to adjust brightness, contrast, and aspect ratio — no need to dig through a labyrinth of nested menus to get at any setting. Even digging into color profiles is refreshingly easy, all the presets are presented in one menu without excessive scrolling. It’s a simple, straightforward user interface that gets out of the way and presents options clearly and concisely.

Almost a cut above

For such an inexpensive monitor, the Dell S2418H was surprisingly capable right out of the box, though it did have a few downsides.

The 1080p IPS display panel delivered lifelike colors without any calibration, and possesses a standard 60Hz refresh rate. It also features AMD’s FreeSync, which is a welcome addition for gaming,

Looking at overall quality, the Dell S2418H kept up with and even surpassed its nearest competition in a few important metrics, but fell short in a few others.

In practice that meant the two Samsung displays, the CFG70 and CF591, delivered brighter colors and deeper shadows than the Dell S2418H. It’s not too surprising that the CFG70 would eclipse the S2418H, as it features quantum dots — a nanocrystal semiconductor layer which can improve contrast and color fidelity — and costs about $100 more.

However, the S2418H beat both Samsung displays when it came to color accuracy. The Samsung CFG70 scored within an acceptable range, hitting an average color error 2.71. A perfect score is typically right at 1.0 or just below, meaning colors are rendered almost perfectly. The Dell S2418H scored 1.83, coming within striking distance of that perfect score, despite its budget pedigree.

Speaking of color, none of these displays managed to do particularly well when it came to color gamut. They all managed to render 100 percent of the sRGB spectrum, which most desktop monitors can do, but they each fell short of that percentage when rendering the finicky AdobeRGB spectrum.

It’s not a great score, but it’s average, as most budget monitors are capable of landing somewhere between 70 and 80 percent in this metric.

Like tuning an instrument, sometimes calibration can bring out the best in a monitor, particularly a budget monitor. Finding hidden potential is always a pleasant surprise, and the S2418H is nothing if not filled with pleasant surprises.

There weren’t any major changes after we calibrated the S2418H, but we did see an uptick in color accuracy. Its previous average color error of 1.84 was reduced to a near-perfect-but-not-quite-perfect 1.26. To the naked eye, the changes were very slight, and barely noticeable, but it’s a big enough change that potential buyers might want to consider giving the S2418H a calibration to kick that accuracy up a bit.

This is usually the part where we lament the quality of a monitor’s built-in speakers, and recommend potential buyers invest in a decent pair of headphones or external speakers. Not today! Remember that goofy looking speaker we mentioned earlier?

Its strengths far outweigh its faults.

It produced high-quality sound, and acted as a center channel for S2418H. Music was clear, nuanced, and appropriately rich, while sound effects from games or movies were immersive and clear. Nothing sounded hollow, muddy, or clipped.

While it’s never a bad idea to invest in a good pair of headphones, the S2418H won’t have users running to the store to pick up a pair. The weird center-speaker that rests in the display stand is more than just a novelty.

The Dell S2418H comes with a standard one-year warranty covering manufacturer defects, alongside one year of Dell’s Advanced Exchange Service, which provides next-day shipping for a replacement unit if needed. This is typical for a budget monitor.

At a higher price, the Dell S2418H might not be worth the trouble, but this monitor is a steal at $240. Providing a stylish, nearly bezel-free viewing experience, and surprisingly robust sound quality, all for less than $300, the S2418H is great budget monitor.

Yes and no. There is always a better alternative if you’re willing to spend a little more. The Samsung CFG70, for instance, is about $150 more. For that extra bit of cash, you end up getting a better contrast ratio, a slightly curved display, a refresh rate of 144Hz, and a response time around 1ms. For serious gamers, the CFG70 is the better buy.

However, if you’re just looking for a good all-around budget monitor that will get the job done and look good doing it, the Dell S2418H is a better choice.

That’s a tricky question because the S2418H is, after all, a 1080p monitor. It’s already starting to show its age, or more accurately, its pixels. They’re visible to the naked eye, even if you’re sitting at about arm-length. Text suffers worse than images or videos, where it’s harder to discern individual pixels. With a Word document or Excel sheet open, you might have a hard time ignoring those pixels.

They’ll only become more noticeable over time, not because the display will deteriorate before your eyes, but because the prevalence of higher-resolution displays will make users more sensitive to the appearance of pixels. The monitor itself will last for quite a while, though, as it features a robust build quality, and a rock-solid stand.

Yes. For a home office, office-office, or entry-level gaming desktop, this monitor is a fantastic buy. It provides excellent image quality and attractive design at a reasonable price.

Topics
The Keychron S1 is a slimline keyboard with premium features
The best desktop computers for 2022: Dell, HP, Apple, and more
Razer quadruples the Blade 14’s USB speed with a simple software update
Twitter’s SMS two-factor authentication is having issues. Here’s how to switch methods
The best Cyber Monday gaming laptop deals for 2022
The best Cyber Monday MacBook deals for 2022
Dell Cyber Monday deals: Save on Dell XPS 13, gaming laptops
Apple Cyber Monday Deals: Apple Watch, AirPods, iPad, MacBook
This Alienware gaming laptop with an RTX 3080 just got a bit cheaper
This Dell gaming laptop just got a big price cut — now $700
How to recall an email in Outlook
This Alienware gaming PC with an RTX 3080 Ti is $580 off right now
Almost a week after Black Friday, the Dell XPS 13 laptop is still $250 off