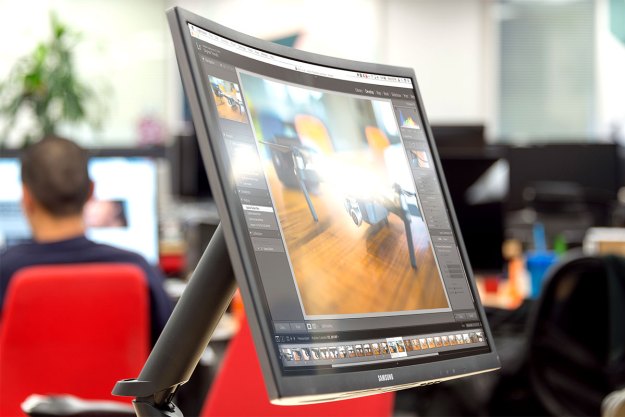 Editors’ note: After a conversation with Samsung, we have discovered that some menu settings were not the default settings. Doing a factory reset changed the performance of the monitor. This was an error on the part of Digital Trends, as all monitors are to undergo a factory reset as part of the testing procedure. An update to this review has improved the score.

Samsung’s CFG70 is striking. It may be a simple 24-inch, curved gaming monitor with a humble 1080p resolution, but the armature and large black pedestal are unusual and inspire confidence. With a 144Hz refresh rate and one millisecond response time, it has all the makings of a killer gaming monitor, too.

But can it live up to the impressive pedigree of the jaw-dropping Samsung S34E790C?

Unboxing the Samsung CFG70 is a joy. The Styrofoam pulls away and there’s a helpful little illustration in the quick-start guide that shows you how to affix the base to the stand. It’s a far cry from some monitor unboxing experiences, which involve a lot of awkward positioning while you struggle to get the stand in place. It’s also worth noting that the stand is VESA compatible, for you wall-mounters out there.

Before you turn on the Samsung CFG70, the first thing you’ll notice is the design. Most desktop monitors, even gaming monitors, have a pretty typical design language. The Samsung CFG70 eschews the typical platform and stand for an articulated armature that really does allow you to move the screen to almost any position with relative ease.

Just reach out and pull it closer, twist and angle it how you want, and the armature will keep it in place. The downside though, is that the arm does take up more space than a typical monitor stand would, so make sure your monitor isn’t too close to the wall or that arm is going to be a little more difficult to move around.

Unfortunately, the arm and stand doesn’t do a great job of keeping the monitor still. Even with just light typing, it wobbles an awful lot. Bump the table, it wobbles. Bounce your knee under your desk, it wobbles. Look at it the wrong way, it’ll probably start wobbling. The wobbling was particularly bad when playing a game of Overwatch. Even quick mouse movement caused the monitor to wobble.

Even fast action in Overwatch was incredibly smooth, jitter-free and very responsive.

The aforementioned arena lighting is really just an LED underneath the monitor that can pulse in time to any audio you have pumping through the speakers. The black disc of a stand serves as a platform for the dim under-screen LED.

Aside from the stand, the monitor itself isn’t particularly robust. It doesn’t feel like a $350 monitor. The frame has a low-quality feel, and creaks and crackles when you put even a little bit of pressure on it. There is an attractive metallic frame around the outside of the display, but it’s essentially invisible unless you’re standing to the side or above the monitor.

Of course, you might not care about the bezel when you’re gaming. But all of Samsung’s competitors — even notoriously bland Dell — have put more effort into classing up their monitors.

The Samsung CFG70 features a standard array of ports, including two HDMI, one DisplayPort, and one 3.5mm headphone jack alongside a 240V power port. The ports themselves are primarily located on the back-right side of the monitor, they’re all easily reachable, and it’s here that the armature stand really shines. You can quickly and easily pivot the screen to the side in order to see the ports and plug in anything that needs to be plugged in.

Big, bold, and easy to navigate

The controls are a little weird. Behind the right side of the monitor, there’s a small joystick, a control which is common enough on some monitors. But combined with buttons on the under side of the monitor it’s not immediately clear which one you’re supposed to use.

There are three buttons on the bottom right corner of the monitor, which don’t do what you’d think they might. Instead of popping open a menu to change display settings, these three buttons cycle between color profiles for different games. The five-way jog key on the back, that’s the one you use to access display settings.

The settings menu, once you get to it by clicking the little joystick, features what Samsung calls “game-style menus,” which is shorthand for blue-green sci-fi looking menus. They’re easy enough to navigate, and they take up a little more of the screen than they should, but otherwise get the job done.

In the settings menu, you can enable fast response, change the refresh rate, and tune your color, contrast and brightness settings. A few presets are included for different game types – RPG, RTS, FPS – but you can adjust brightness, contrast, refresh rate, and color settings individually.

Looks great, right out of the box

Right out of the box, display quality is solid. Colors seem bright and vivid, and at first glance our tests in Overwatch looked crisp and clean. Action was appropriately snappy and fluid thanks to the 144Hz refresh rate and AMD FreeSync support.

In our tests the CFG70 displayed a strong maximum contrast ratio of 1180:1. Most monitors end up just below 1000:1, with laptop displays usually coming in a little lower than 800:1. Samsung’s most direct competitor, the Dell S2417DG, scored just 500:1 in our tests.

The Samsung CFG70 eschews the typical platform and stand for a stylish articulated armature.

The strong contrast ratio leads to vibrant, realistic image quality in games and movies. Dark areas of an image look very dark indeed, lacking the gray hue that can be found in displays with less impressive contrast. You will notice minor backlight bleed if you look for it, but that is common in curved monitors, and the bleed we saw in our review unit was no worse than we’ve seen with competitors.

This Samsung is capable of representing 100-percent of the sRGB spectrum and 87-percent of the AdobeRGB scale. Samsung treats this as a headline feature, touting the display’s Quantum Dot technology. We’re a bit skeptical of this implementation, as past Quantum Dot displays we’ve tested have reached an ever wider color gamut.

Like all the monitors that come through our lab, we hooked the Samsung CSG70 up to a professional grade colorimeter and see if we couldn’t tune the settings to compensate for any shortcomings.

The sRGB and AdobeRGB spectra didn’t move, still 100-percent and 87-percent, respectively. But average color difference actually took a step backward, and came in at 2.8. A great contrast ratio doesn’t quite compensate for the color error, but it comes close. Still, the color gamut remains great for a monitor in this category, and the color accuracy is acceptable.

Running through Overwatch, Battlefield 4, and Deus Ex: Mankind Divided, the superior contrast rate made it tough to spot any significant color inaccuracy.

Darks still melded seamlessly into lights, action continued to be fluid and smooth, and we saw no screen-tearing, a credit to the monitor’s superb refresh rate and one-millisecond response time.

The Samsung CFG70 is a very high performing monitor, if you can look past the stand and design issues. It boasts an ultra-fast 1 millisecond response time, and coupled with a 144Hz refresh rate, your games will be fluid and smooth without any screen-tearing or blurring. There’s even support for AMD FreeSync, which will eliminate tearing and stuttering that can detract from gameplay.

The Samsung CFG70 comes with a standard one-year warranty covering parts and labor for any manufacturer defects you might encounter.

Samsung’s CFG70 has a great color gamut and excellent contrast, traits that help games look their best. However, it’s a little pricey for a $350, 1080p monitor.

There’s a hoard of alternatives in the 24-inch, 1080p market. These monitors start as low as $100, so there’s many less expensive choices. However, the feature set of the CFG70 clearly aims at the top of the 24-inch category.

The Dell S2417DG is a good alternative in the same ballpark as the CFG70. It’s a 24-inch 1440p gaming monitor with a much more stable and sturdy stand, for a little extra cash. However, its image quality is not as good. Dell S2417DG will run you about $450.

Further down the price spectrum you’ll find the LG 29UM68-P, a budget friendly 1440p ultra-wide monitor which only costs about $290. We have not tested this monitor, however, so we can’t comment on its image quality.

The Samsung CFG70 is not a good bet for longevity. While the 144Hz refresh rate will likely become the new standard for PC gaming in the coming years, this is a 24-inch display, which already places it on the small end of gaming monitor market. There’s a good chance you’ll be looking for an upgrade in a few years.

Yes. You may need to buy a third-party stand to correct the wobble, but then again, it may not be an issue if you have a very sturdy desk. That aside, the CFG70 scored very well in all of our image quality tests.

In fact, it’s the most attractive 24-inch gaming monitor we’ve ever seen. We’re not sold on the idea of spending $350 for a display of this size, especially not when decent 4K monitors are available for as little as $450. But you’ll be hard pressed to find a better monitor if you need to stick to a small display size and 1080p resolution.

The best monitors under $500 for gaming, work, and entertainment
AOC’s new crazy expensive ultrawide gaming monitor has one thing others don’t
Best 27-inch monitor deals for June 2022
The world’s fastest 4K 240Hz gaming monitor can now be yours
Best HP Envy deals for October 2022
The new Dell G16 gaming laptop just got a $240 discount
Norton Antivirus Free Trial: Get a week of protection
ABCMouse Free Trial: Get your first month free
Intel Arc A770 16GB vs. A770 8GB vs. Nvidia RTX 3060
Intel Arc A750 vs. Nvidia RTX 3060
Can I use an Intel Arc GPU with AMD Ryzen?
Intel Arc Alchemist: specs, pricing, release date, performance
Microsoft Word Free Trial: Get a month of service for free