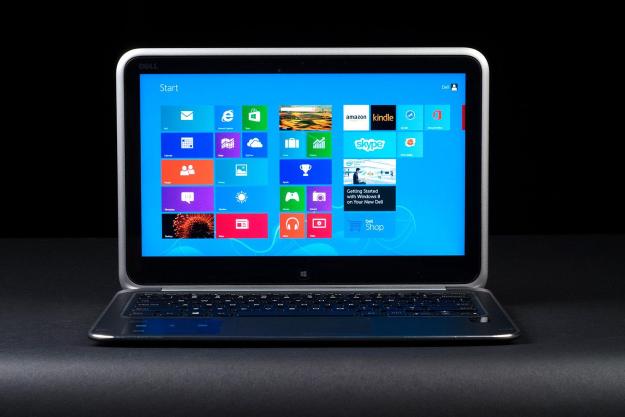 While most early attempts at a Windows 8 convertible used a traditional sliding or rotating design, Dell came up with a more interesting idea: What if the panel could flip inside its frame? This led to the XPS 12, an exceptionally crafted convertible that boasted strong performance, but was still light enough for part-time tablet use. We liked it so much we gave it an Editor’s Choice, making it the first convertible to receive our highest award.

Dell’s XPS 12 remains one of the best convertible PCs.

Cramming a more efficient processor into a portable PC seems like a recipe for success, but the chassis hasn’t changed, a risky move in the fast-moving PC market. Over the last year Lenovo has dropped the price of the Yoga, Acer has introduced two highly-reviewed convertibles, and all the major manufacturers have released at least one new design. They’ve also slashed prices, but Dell has decided to stand firm, pricing its fourth-gen model at $1,200 (last year’s model is now $1000, while supplies last). Is updating the internal hardware enough to keep the XPS 12 competitive?

Not many people associate Dell with excellent design, but the company’s high-end laptops are among the best in the PC business. The use of carbon fiber, coated with a soft-touch material to provide luxury (a lesson Sony should learn), creates a style that’s both unique and professional. We particularly like the checkerboard pattern on the lid; there’s nothing else on the market like it.

Build quality is superb, too. Dell’s engineers have kept most seams out of sight, and those visible are tight. Chassis flex is not an issue and display frame, which contains the flip-hinge screen, feels extremely solid. The hinge only works in one direction, as well, so accidentally flipping in the wrong direction is not possible.

Connectivity is the one area that could be improved. Only two USB ports are available (both 3.0) and DisplayPort is the only video output. Audio is handled via a combo headphone/microphone jack. Ethernet is missing completely, as is a card reader, two features almost every convertible provides. Worse, all connections except the audio jack are on the right side, so external devices might get in the way if you’re right-handed and use an external mouse.

Dell’s flip-hinge design is an excellent compromise, providing all the benefits of a laptop without excessively compromising the tablet experience. With that said, however, the XPS 12’s year-old chassis is starting to show its age. Weight comes in at almost 3.4 pounds, which means this 12.1-inch system is as hefty as some 13-inch alternatives. Tablet use, though initially pleasing, can become tiresome if there’s nothing nearby to hold up the device.

The laptop experience suffers from no such long-term problems. Keyboard quality is excellent, thanks to good key feel and a spacious layout. Even the palm rests are large. We do wish there were greater tactile feel when you bottom out a key, but this is an issue only the most serious typists will care about.

Backlighting is standard and automatically activates by default. Two brightness settings are available, and while the brighter is excessive, the dimmer is perfect for use in a darkened room. Key leak is a constant issue, however, and affects every row of keys to some degree.

Touchpad quality is mixed. The surface is extremely spacious, generally responsive, and handles multi-touch gestures well, but the experience is spoiled by a serious lack of definition between the touch surface and the surrounding palmrest. We had problems with the Windows 8 multitasking gestures, which switches app at the lightest horizontal swipe, as a result. The integrated left and right buttons lack travel, as well, and are generally unpleasant to use.

The 12-inch, 1080p touchscreen on this convertible looks sharp at first glance, and our objective tests mostly confirmed that assessment. Maximum brightness is among the highest we’ve recorded from a laptop, contrast at maximum is 570:1, and sharpness is great thanks to the screen’s high pixel density.

We did notice that videos sometimes looked flat. This is due to poor black levels and a merely average sRGB gamut of 69 percent. These results aren’t terrible, but competitors like the Lenovo Yoga and Samsung Ativ Book 8 do better. Those competitors are dimmer and have a lower pixel density, so some compromise must be made.

Audio quality is adequate for a system of this size, but generally not up to the task of filling a large room with sound, or overcoming ambient noise. The speakers seem geared to handle conference calls rather than movies, which makes sense given the XPS 12’s focus on professional use. Most buyers should consider headphones or external speakers mandatory.

Jack of all trades, master of some

Our review unit arrived with an Intel Core i5-4200U processor, one of the least powerful fourth-gen Core processors on the market. Despite this, the XPS 12 turned in solid performance, reaching a score of 38.5 GOPS in the SiSoft Sandra Processor Arithmetic test and 6,888 in 7-Zip’s compression benchmark. These figures are more than adequate for a convertible laptop and compare well to other small systems.

Dell’s flip-hinge design provides all the benefits of a laptop without excessively compromising the tablet experience.

PCMark 8’s creative test agreed with our processor benchmarks by turning in a score of 2,364. That is, once again, respectable for a system in this class. The PCMark storage benchmark came to a result of 4,904, which is strong, though not exceptional. Most laptops with a solid-state drive score between 4,800 and 5,000.

3DMark continued the Dell’s trend of solid performance with a Cloud Gate score of 4,281 and a Fire Strike score of 611. These numbers are better than average for a convertible with a fourth-gen Core processor. Though obviously not a gaming rig, the XPS 12 can handle 3D titles in a pinch, albeit at low or medium detail.

Dell’s original XPS 12 has strong battery life, and updating to the more efficient fourth-gen Core processor has enhanced endurance to record-breaking levels. A charge lasted thirteen hours and eleven minutes in our light-load reading test, while the Peacekeeper Web-browsing benchmark needed six hours and forty-three minutes to consume the battery. Both numbers are exceptional, and the light-load figure is the best we’ve ever seen from a laptop without an extended battery.

Excellent endurance plus small size adds up to an extremely portable system. Yes, as we complained earlier, this convertible weighs a bit more than we’d like, but 3.5 pounds is barely noticeable when it’s in a messenger bag or backpack. The XPS 12 is a great pick for anyone who travels frequently.

Power tests showed the XPS 12 consuming up to 13 watts at idle and 24 watts at load, figures that are above-average for a system in this category. The extremely bright display no doubt contributes significantly to the results. Still, these numbers are low by any reasonable measure, and won’t move the dial on a power bill.

The original XPS 12 was reasonably cool and quiet at idle, but could cause a small ruckus at load. Intel’s more efficient new chip has helped to resolve that problem. The system fan now produces only 42 decibels of noise at a full load, down from 48dB before. That’s a huge drop; the new model’s fan usually isn’t enough to overcome ambient noise.

Temperatures have dropped, too. We recorded a maximum external reading of 88.3 degrees Fahrenheit while at idle and 101.9 degrees at load. Both numbers are several degrees below the old XPS 12. With that said, this convertible can still feel warm because of a bottom vent which, though technically used to take in air, also allows for the escape of some internal heat.

Shoving a fourth-gen Intel Core processor into the XPS 12 greatly improved battery life and integrated graphics performance. The result is a convertible that can handle many tasks, but also break records for battery life. More than 13 hours in the light-load test is outstanding; even some Android tablets don’t last that long.

Still, we are dismayed by Dell’s minimum-effort approach. The original was very good, so perhaps the company felt no need to revise the chassis. To an extent, they’re right, as this remains one of the better convertibles on the market. But it’s also among the heaviest and thickest, two traits that distract from the tablet experience.

And, since the old model is now sold for $1000 ($200 less than our review unit), the older version seems a superior value. The only major benefit provided by the new model is amazing battery life, but its predecessor was no slouch, and can last 8 hours on a charge. We really think the new model should be reduced to at least $1,100 because Acer, Lenovo, and Samsung are willing to sell similar hardware for a couple hundred less.

Still, Dell’s XPS 12 remains one of the best convertibles. This system is small and portable, yet powerful, which means it can handle serious work and casual Web browsing with equal ease. Few alternatives in this category can claim the same.