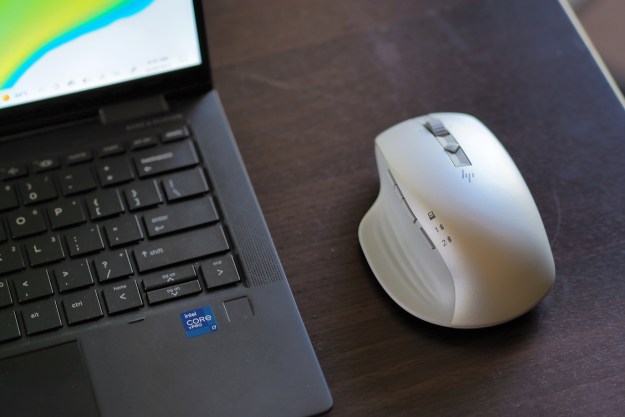 “The HP 930 Creator Wireless Mouse is a highly customizable mouse with no serious downsides.”

HP has doubled down on its recent effort to woo creative customers, with a full line of laptops like the Envy 14 and Envy 15 aimed squarely at creative professionals. But HP hasn’t stopped with laptops. It’s also come out with the HP 930 Creator Wireless Mouse, a device that’s meant to work more efficiently in applications like Adobe Photoshop and Premiere Pro.

I received a 930 Creator Wireless Mouse review unit alongside the HP Envy x360 15, another laptop aimed at creators. I put the $90 wireless mouse through its paces — does it offer anything to compete against the best mice?

The 930 Creator Wireless Mouse is constructed of two-tone silver and grey plastic and feels sturdy enough. It’s light and easy to move around without feeling cheap, and the lower part that flares out to the left has a bit of a grippy coating that helps maintain control during fast mousing. Other than the color scheme, HP’s mouse looks a lot like Logitech’s MX Master 3, its main competitor.

Like the MX Master 3, the 930 Creator Wireless Mouse has a dual function scroll wheel with a button that switches from ratcheted to free-scrolling mode. HP’s version is just as smooth when allowed to flow freely but chunkier in ratchet mode. The scroll wheel can be depressed and pushed left and right for additional functionality.

Along the left-hand side toward the top of the flare are four buttons. The one closest to the user switches between two Bluetooth devices, while the other three can be programmed to serve many functions (more on that later).

This is actually an unfortunate arrangement because it’s far too easy to hit the Bluetooth switch rather than the first programmable button, disconnecting the active device. I’ve used the mouse for a few weeks now, and I still hit the wrong button on occasion. HP would have been smarter to put the button on the bottom of the mouse.

The 930 Creator Mouse comes with a proprietary dongle that’s plugged into a slot on the bottom. It’s accessible via a magnetic cover that’s easy enough to open once you read the attached diagram that tells you to press on the bottom to pry up the cover. When combined with the two Bluetooth connections, the dongle lets you connect to a total of three devices.

Like the MX Master 3, you can connect to multiple devices at once via Bluetooth and the dongle and move the cursor and files between devices. That’s a nice feature if you use multiple machines at once, and the feature works between Windows 10 and Mac OS.

Thanks to its well-design contours and rounded design, the 930 Creator Wireless Mouse is a comfortable device to use — if you’re right-handed, that is. It’s pretty much unusable by left-handed users, which is unfortunate. Of course, the same can be said of the Logitech MX Master 3 and many similar mice.

For those who can use it, though, and if your hand isn’t too large, then you’ll find the mouse to fit comfortably in your palm and your thumb to rest easily on the flare. Moving the mouse around is an easy enough process that doesn’t generate significant fatigue even after hours of use.

It’s a mouse that’s meant to be used for long creative sessions.

The buttons are in the right spots, making them readily accessible but not too easy to press by accident (except for the Bluetooth switch, as mentioned above). The left and right buttons have a nice click and aren’t too loud.

All in all, the 930 Creator Wireless Mouse passes the ergonomic mouse test quite nicely. It’s a mouse that’s meant to be used for long creative sessions, and you won’t find it getting in your way.

The 930 Creator Wireless Mouse has a sensor resolution of 800 to 3,000 dots per inch (dpi), below some competitive mice that can be up to 10,000 dpi resolution. The MX Master 3, for example, has 4,000 dpi resolution, more than the HP but not so much that the typical user will notice. The HP Accessory Center app can be installed from the Microsoft Store to set the resolution.

As mentioned above, the scroll wheel works remarkably quickly when in smooth-scrolling mode. In fact, it might move too quickly if you’re fidgety, but it lets you move through long web pages and documents with ease. As far as cursor control goes, the 930 Creator Wireless Mouse is a confident performer, providing precise control thanks to a combination of just enough weight and the ergonomic design.

A one-minute charge will provide 30 minutes of battery life.

HP promises up to 12 weeks of battery life on a single charge. So far, I’ve been using it for a couple of weeks and I’m still sitting at around 70% battery life. So, I’m on track to approach HP’s estimate. HP also indicates that a one-minute charge will provide 30 minutes of battery life, great for those times when you need to finish a task and the battery runs out.

All seven of the 930 Creator Wireless Mouse’s buttons — the depressed scroll wheel, the scroll wheel’s left and right action, the right button, and the three programmable buttons — can be assigned to functions within several applications. The HP Accessory Center app is used to program the buttons.

As in the example above, the app can recognize several applications and automatically assign specific functions to each button. Or, the functions can be set manually. It’s an easy-to-use app that makes customizing the mouse for supported applications a breeze.

The HP 930 Creator Wireless Mouse is a great new addition to the programmable mice category. It’s well-built, feels great in hand (if you’re right-handed), and offers easy-to-use and very flexible programmability. Buying this mouse alongside an HP laptop makes perfect sense, and gives you one place to go for support.

There are other good mice, though, so do your shopping. Chances are you’ll have the 930 Creator Wireless Mouse on your shortlist.

The most direct competitor is the Logitech MX Master 3, which costs $10 more than HP’s mouse. The Logitech also supports several applications with customized buttons, but not as many as the 930 Creator Wireless Mouse.

The Razer Pro Click is another alternative to the 930 Creator Wireless Mouse, and it, too, is $10 more. You’ll find that the Razer has longer battery life, an equally ergonomic design, a 16,000 dpi sensor, support for up to four devices, eight programmable buttons, and longer battery life. It’s a formidable competitor.

The 930 Creator Wireless Mouse is well-built and should last for years of use. The one-year warranty is an industry standard.

Yes. It feels great in hand and it’s customizable to fit your workflow.

The best GPU benchmarking software
Apple’s VR headset may launch soon, intriguing leak suggests
The best Intel processors for 2022
Best Dell XPS deals: Save on XPS 13, XPS 15 and XPS 17
Adobe Free Trial: Try Creative Cloud for free
IPVanish Free Trial: Try it for a month, no strings attached
How this new Quest VR app totally sold me on exercising in virtual reality
Walmart shoppers are loving this $159 11.6-inch 2-in-1 laptop
1-day sale drops this gaming laptop with an RTX 3050 Ti to $550
Google may have just fixed Chrome’s most annoying problem
Norton Antivirus Free Trial: Get a week of protection
ABCMouse Free Trial: Get your first month free
Microsoft Word Free Trial: Get a month of service for free