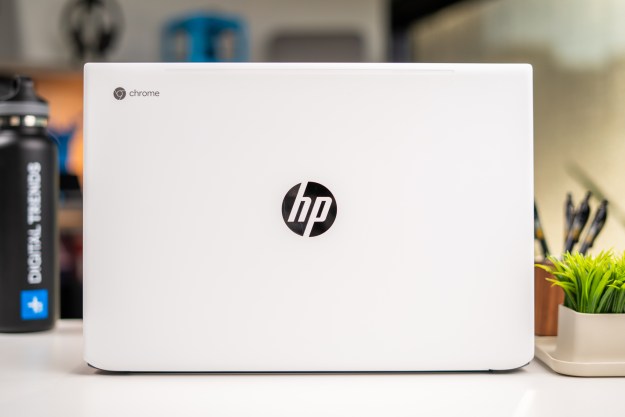 When you spend under $500 on a laptop, your expectations should be low. There might some plastic here and there, performance might suffer, and the display might not be the best. But some Chromebooks can do wonders with relatively modest components. The HP Chromebook 15 has such ambitions.

HP provided a $469 configuration (only available through Wal-Mart) that features an Intel Core i3, 4GB of RAM, and 128GB of eMMC storage. Does this the sub-$500 Chromebook add up to something more than the sum of its parts?

A small touch can make a big impact on how a product comes across. Take the ceramic-like finish on the Chromebook 15’s aluminum lid — it adds a little panache to what otherwise would be a rather boring aesthetic. It even contrasts nicely against the metallic blue of the rest of the chassis.

The laptop looks like it costs more than it does, and that’s exactly what you want from a budget machine. Note that HP says this is a “micro-edge” display, but while the side bezels are thin enough, the top and bottom bezels aren’t up to modern standards.

The build quality is also good, with the lid bending just slightly to pressure and the sandblasted aluminum keyboard deck showing just a little bit of flexing. The plastic bottom of the chassis is rigid enough, and overall the Chromebook 15 feels like a quality product. Compared to some other larger Chromebooks in the same price range — say, the HP Chromebook 14 and the Acer Chromebook 15 — the Chromebook 15 is both better-built and better looking.

The Chromebook 15 is also relatively well-connected, providing pretty much the standard number and types of ports for similar Chrome OS laptops. Two USB-C 3.1 ports support charging, data, and display, along with a USB-A 3.1 port and a microSD card slot.

You’ll need a dongle to attach an external display, which is a bummer, but otherwise, HP has you covered. As with all Chromebooks that we’re aware of, there’s no Thunderbolt 3 support. Wireless connectivity includes 802.11ac Wi-Fi and Bluetooth 4.2, both of which are behind the times but will still provide for decent wireless performance.

Core processors are a welcome addition

The next item on a budget laptop buyer’s list is likely its performance. Here, the Chromebook 15 has a trick up its sleeve. Well, not a trick, exactly, but rather an usually fast CPU in Intel’s 8th-gen Core i3-8130U CPU. Maybe one day that will be more of a standard for budget-oriented Chromebooks, but for now, the HP has a distinct advantage over other low-cost options that run with much slower Intel Pentium and Celeron processors.

The processor gives the Chromebook more than enough power to keep the vast majority of Chrome OS users happy, and that includes the 4GB of which is enough for all but the most aggressive multitaskers. The Chromebook 15 remained snappy no matter how many Chrome tabs and Android apps I had running in the background. That’s something new for such a Chromebook this cheap.

Peruse the market, and you’ll find a lot of Chrome OS , like Acer’s Chromebook 15, that still use the aforementioned Intel Pentium and Celeron CPUs. Those provide adequate performance for many users, but you’re more likely to run into lag and hesitation.

That runs counter to what Chrome OS is all about, which is supposed to be quick and streamlined on that don’t cost thousands of dollars — that makes the HP Chromebook 15 well worth the extra $70 or so over the Acer, and then some.

If performance matters to you, then the Chromebook 15 deserves a special place on your short list.

The Speedometer 2.0 web benchmark confirmed my suspicions. The HP Chromebook 15 scored a strong 93.8. That’s at the upper end of our database, a place that’s dominated by Intel Core processors.

Slower Chromebooks with Pentium and Celeron processors tend to score less than half as fast. HP’s Chromebook 14 with an AMD A4 CPU scored a paltry 24.2. Ouch. It’s the same story in Geekbench 4, where the HP Chromebook 15 was quicker than most Chromebooks — and even rivaled some Windows 10 running Y-series CPUs.

If performance matters to you, then the Chromebook 15 deserves a special place on your short list. The laptop is likely to cruise through your workflow without skipping a beat, and that’s worth its weight in gold.

The Full HD (1,920 x 1,080) display was equally good, providing enough brightness for working in an office or a classroom (but not enough to overcome bright light sources like the sun). I can’t test Chrome OS displays with my colorimeter, but the colors were vibrant enough for general browsing and media consumption. If you depend on highly accurate colors for your work, you’ll likely need to look elsewhere.

Contrast was sufficient that black text on a white background stood out, which is essential to me as a writer, and the display’s gamma seemed close to the perfect 2.2 — Netflix video was neither too bright nor too dark.

In comparison to other budget Chromebooks like the HP Chromebook 14 and Acer Chromebook 15, I found the display superior and a pleasure to use. You’ll have to step up in price to something like the new Google Pixelbook Go that’s a couple of hundred dollars more if you want a much better display.

In fact, Netflix binging is quite enjoyable on the HP Chromebook 15 — as long as I plugged in some headphones. The build-in speakers were fine, but the bass was lacking (as usual in laptop audio systems) and there was some distortion at higher volumes. Use the speakers for system sounds and the occasional game or YouTube video, but have your favorite headphones handy for TV shows, movies, and music.

Long-lasting, as long as you don’t stress the CPU

Chrome OS shows promise by its very nature as a lightweight operating system. Normally, Chromebooks can last through a working day performing the usual tasks, especially if they’re web-based.

When we ran the Basemark benchmark that stresses the CPU, the Chromebook 15 lasted for just three and a half hours. That’s almost an hour behind the and an hour and a half behind the HP Chromebook 14. Clearly, the Core i3 processor can suck down battery life if it’s working too hard.

Overall, for the usual Chrome OS user, the Chromebook 15 is likely to last well beyond a full work or school day. That’s a strong result for a laptop that’s this well-equipped and costs so little.

HP makes great keyboards, particularly on their Spectre line of Windows 10 . The HP Chromebook 15 benefits somewhat from this pedigree, with a keyboard that has sufficient travel and a snappy feel that avoids the HP Chromebook 14’s mushy experience.

There is, however, a jarring bounce at the bottom of key press that’s distracting. I got used to it after a while, but the keyboard never felt comfortable to me. On the other hand, there are four levels of backlighting, and that’s a plus for a budget laptop.

The touchpad was just fine, though, being nicely sized and supporting all of the usual Chrome OS multitouch gestures. And HP included a touch display as well, which is great for scrolling through web pages with a thumb and tapping the occasional button.

Few budget of any make or operating system include touch displays unless they’re 2-in-1s, and so HP’s decision to include one here is appreciated.

If it costs a couple of hundred dollars more, we wouldn’t be able to recommend it. It’s not the most solidly built, it doesn’t have the best display, and its keyboard is a little rough on the fingers.

But at $469, it’s a strong value for a Chromebook. Add in the excellent performance and all-day battery life (as long as you’re not pushing the CPU too hard), and it’s a winning combination.

The HP Chromebook 14 is a good option if you want AMD Radeon graphics for playing games, and at $330, you can get a Full HD display, 4GB of , and 32GB of storage. It beats out the Chromebook 15 in price and graphics performance, but it’s not nearly as well-built or as fast otherwise, nor does its battery last very long.

Another option is the , which is also a well-built laptop and offers a Full HD display, 4GB of , and 32GB of storage for only $400. Battery life isn’t as good, though, and performance takes a back seat thanks to an Intel Pentium N4200 processor.

The Chromebook 15 should last as long as you need it to given its low cost of entry. It’s rigid enough to evoke confidence, and the components will keep Chrome OS humming for a long while. The one-year warranty isn’t anything special, but it’s the industry standard.

Topics
Best Apple Deals: Save on AirPods, iPads, MacBooks and more
Best Chromebook deals: Get a new laptop from $114
Best 17-inch Laptop Deals: Get a large laptop for $330
Best Alienware Deals: Save on gaming laptops, PCs and monitors
Best MacBook Deals: Save on MacBook Air & MacBook Pro
Dell Laptop Deals: Save on XPS 13, XPS 15, XPS 17 and more
How to sync your Outlook calendar with an iPhone
Best gaming laptop deals: Save on Alienware, Asus and more
This huge password manager exploit may never get fixed
Apple Mac mini M2 buying guide: don’t make this mistake
Tested: Is Discord really slowing down Nvidia GPUs?
Apple Reality Pro: everything we know about Apple’s VR headset
What MacBooks needs to learn from competitors about transparency