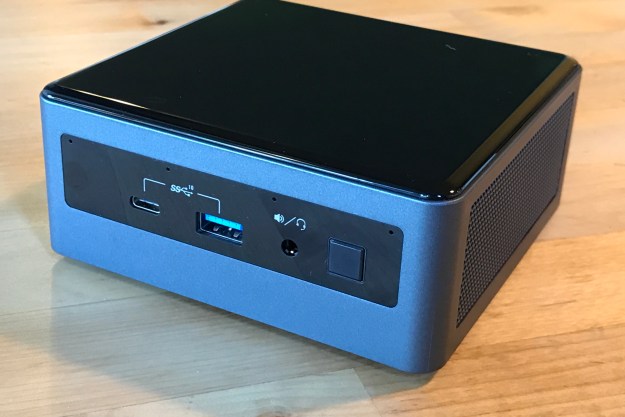 Then there’s Intel’s NUC (short for Next Unit of Computing), which makes these features its selling point. This long-standing line of miniature PCs, now seven years old, remains unique for that reason.

The NUC I’m looking at today, officially called NUC10i7FNHAA, is among the most powerful yet. It has a 10th-generation Intel Core i7 processor with six cores, a 256GB solid-state drive, a 1TB SATA HDD, 16GB of RAM, and Windows 10 Home.

Unlike some NUC systems I’ve reviewed, this one is sold as a fully functional PC, not a bare-bones system. It includes everything you need at a price of $1,049. Is it the ultimate mini PC?

There’s not much to say about the Intel NUC10i7FNHAA’s externals. If you’ve ever laid eyes on a NUC, this one looks much the same. It offers the dark gunmetal exterior of other recent NUCs, instead of the silver of early models. It’s topped with a glossy, black plastic lid.

NUCs’ size hasn’t changed much over the years. This model is 4.4 inches wide, 4.4 inches deep, and 2 inches tall. It’s not the thinnest NUC, but also not the thickest, and is many times smaller than a typical desktop PC.

Despite that, it has ports of plenty. The front panel offers one USB-A 3.1 port, one USB-C 3.1 port, and a headphone jack.

Around back, you’ll find a Thunderbolt 3 port, two more USB-C 3.1 ports, Ethernet, and HDMI-out. Thunderbolt 3 is particularly nice to have. While found frequently on laptops, it’s still rare on PC desktops. This is a solid range of connectivity that covers most options, though the lack of DisplayPort might annoy some.

Given its size, you might expect the Frost Canyon NUC’s tiny body to hide complex internals. That’s not the case. Intel’s been at this for seven years, and it shows.

You open the NUC by unscrewing the four feet on the bottom of the machine. Once loosened (they can’t be entirely removed, so you can’t lose them), the bottom panel comes off with a tug.

This provides access to the RAM SO-DIMMS, which are the smaller sticks you usually find in a laptop instead of larger desktop DIMMS. You’ll also have access to the M.2 drive and the hard disk drive. That’s everything you can replace in the NUC10i7FNHAA, as the CPU is soldered to the mainboard.

Upgrade options are limited. There’s no spare RAM slot, no spare M.2, no spare SATA. What’s installed is everything the desktop can handle.

However, those parts are easy to remove and exchange if needed. The NUC10i7FNHAA can support up to 64GB of RAM, considerably more than the 16GB installed.

There are limitations on what a NUC can handle due to its small size, but what’s available is impressive.

You’ll find a few open headers inside, but nothing most users will care about. These include two empty USB 2.0 headers and a FRONT_PANEL header.

Clearly, there are limitations on what a NUC can handle due to its small size, but what’s available is impressive. The components you can upgrade are easy to find and immediately accessible after removing just a handful of screws. I’d argue the Frost Canyon NUC is easier to service than most desktops sold by major manufacturers.

The Frost Canyon NUC I reviewed, model number 10i7FNHAA, had an Intel Core i7-10710U processor. That’s a six-core, 12-thread mobile processor with a base frequency of just 1.1GHz, but a maximum Turbo frequency of 4.7GHGz.

It’s a powerful chip. Geekbench 5 returned a single-core result of 1,099, and a multi-core result of 5,702. These numbers don’t break records, but they’re a cut above most laptops and small desktops. Dell’s XPS 13 7390, which we reviewed with the same processor, hit a higher score of 1,250 in the single-core test, but lagged behind with a score of 5,491 in the multi-core test.

The NUC 10i7FNHAA’s performance is solid for its $1,049 price tag. Desktops and all-in-ones from major brands generally offer a Core i5 processor, like the Core i5 9400, at this price point. That processor is somewhat competitive with the Core i7-10710U but, in most cases, will fall behind.

In addition to Geekbench, I fired up Cinebench R15. There, my Frost Canyon NUC scored 980. That’s less impressive, though still acceptable for this price point. I noticed the NUC was forced to throttle in this test. The first test run scored higher, at 1,180, but success test runs would always score in the high-900 range. The score of 980 I’m reporting is the average of 5 test runs.

Our Handbrake benchmark, which transcodes a 420MB 4K video file from H.264 to H.265, required just over two and a half minutes. Dell’s XPS 13 7390, equipped with the same Core i7-10710U processor, was slower at three minutes. The NUC 10i7FNHAA even beats some laptops with Core i9 processors, like the Lenovo ThinkPad X1 Extreme Gen 2.

This NUC can handle the needs of many photo and video editors, developers, and engineers.

Intel is pitching this Frost Canyon NUC, the 10i7FNHAA, as a small workstation suitable for many content creators. It’ll work well enough for that, so long as you aren’t working with cutting-edge content, like 8K video. There, you’ll need a more powerful computer.

However, this NUC can handle the needs of many photo and video editors, developers, engineers, and so on. Call it adequate. That might not sound like high praise but, given the $1,049 price tag and tiny footprint, it’d be foolish to expect more. This is a capable PC for its price.

What about gaming? It’s not great. The fast Core i7-10710U processor doesn’t include Intel’s newest graphics, but instead the older Intel UHD solution. It managed a score of just 1,288 in 3D Mark Fire Strike and only 490 in Time Spy.

Those scores are solid for Intel UHD. However, Intel’s Iris Plus graphics are about twice as quick. And even an entry-level discrete graphics solution, like Nvidia’s GTX 1650 Max-Q, can score over 3,000 in Time Spy. That’s six times quicker than Intel UHD.

In summary, you can’t play most modern games.

In summary, you can’t play most modern games. A title with relatively simple 3D graphics, like Fortnite or World of Warcraft, may deliver acceptable performance at sub-1080p resolution and low graphics settings. Anything else is asking too much.

At idle, the system consumes just 9.8 watts. That’s on par with many 13-inch laptops, and less than most 15-inch systems. Desktop consumption can vary wildly, but it’s rare for a desktop to use less than 20 watts at idle, so the NUC’s power consumption is excellent.

In Cinebench, power draw hit a maximum of 98 watts, then sustained itself at 57 watts after thermal throttling limited the processor. This, again, is comparable to modern laptops. Mid-range desktops I’ve tested easily exceed 100 watts in the benchmark.

Low power consumption means lower power bills and less impact on their environment. It can also mean less fan noise. Unfortunately, that’s not the case here. The Frost Canyon NUC proved a boisterous PC puck, its fan audibly whirring away even at idle. It’s good the NUC is small, because you may need to place it somewhere out of earshot.

The Intel NUC 10i7FNHAA, like other NUC models before it, is a unique take on what a desktop should be. It’s not for everyone, but it absolutely fulfills its mission. The NUC is built to be simple, compact, and power-efficient. It achieves all three goals and is one of the best mini-PCs I’ve tested.

That depends on what you want.

If you just want a desktop and don’t care about size, then the world is filled with options to choose from. Dell’s XPS desktops have consistently ranked among our best desktops and remain our go-to selection.

Apple’s Mac Mini is the most high-profile alternative. It’s a fair bit larger, though, at nearly 8 inches wide and deep. While you can grab a six-core Mac Mini for $1,099, that model has only 8GB of RAM and 512GB of storage. A Mac Mini with similar RAM and storage to the NUC will set you back $1,500.

Should you want a small desktop, particularly one running Windows, the NUC 10i7FNHAA – and NUC models in general – remains a very solid option. The brands most commonly available in the United States, like Dell, HP, and Lenovo, do offer small PCs. However, they’re mostly designed for the business-to-business market, which leads to a high price for many models.

You can’t replace the NUC 10i7FNHAA’s processor, but the Core i7-10710U is fast enough to remain relevant for at least a few years. The RAM and hard drive can be easily replaced. I think you’ll get at least five years of use from it.

Intel provides a standard 3-year warranty. That’s unusually good in the PC space, where a 1-year warranty is standard.

Yes, if you’d like a powerful desktop PC that fits just about anywhere. The Frost Canyon NUC, like past models, fits a niche. But if its that niche perfectly.

Topics
The best capture cards for 2023: Xbox, PlayStation, and PC
Best Monitor Deals: Save on Gaming Monitors, Ultrawide
Apple spring event: massive Mac launch, XR headset, and more
HP Envy x360 13 vs. Dell XPS 13: the best tiny laptop?
The best mesh Wi-Fi systems for 2023
The best Mac webcams for 2023
The best external hard drives for 2023
The best touchscreen monitors in 2023
A key question for the Mac Pro has been answered — and it’s not good news
Apple Mac Mini M2 vs. M1: don’t make a buying mistake
How to delete a page in Word
Apple’s $600 M2 Mac mini obliterates the $6,000 Mac Pro
Here’s how ChatGPT could solve its major plagiarism problem