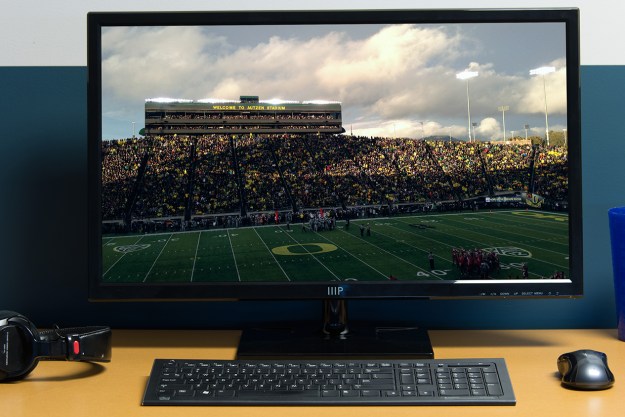 “Hit Monoprice for your cables, but steer clear from its cut-rate monitors.”

You’ve probably heard of Monoprice before. It’s become famous among geeks as the place to buy cables and cords, from HDMI to Ethernet. The concept is simple. Monoprice sells off-brand equipment straight to you, cutting out all the needless marketing. That means anyone can nab fifteen feet of HDMI for six bucks. Swing by your local Best Buy and you’ll be spending $20, at least.

Monoprice applies the same strategy elsewhere, including computer monitors. As different as that may seem from a cable, the idea is the same. Most monitors use a panel from small handful of manufacturers, which is packaged and sold under one of many brands. So why pay for the marketing? Why not just buy the panel direct?

The awkwardly named 28-inch UHD Select Series Matte 4K 60Hz is the answer to that question. On paper, it can go toe-to-toe with any other 4K display on the market. It provides 3,840 x 2,160 resolution, a TN-panel with a five millisecond gray-to-gray response time, and a 60Hz refresh rate. It even has built-in speakers.

But the most important specification is the price. At $400, the UHD Select Series undercuts almost everything on the market. Acer impressively does offer a 4K monitor for less, but there’s nothing else from a major brand that comes close. Is Monoprice’s screen as sensible as a six dollar HDMI cable, or should you spend more?

Editor’s note: Embarrassingly, Monoprice has pointed out the “IIIP” actually stands for “Monoprice,” and this is supposed to be a Monoprice branded product. I’m not sure the logo is intuitive, but in hindsight, I should’ve caught that.

What does matter is material the panel is cased in, and as the price suggests, it’s not great. Cheap, glossy black plastic is the order of the day. It does the job of keeping the screen from tumbling onto the floor, and that’s it.

The stand, also built of glossy black plastic, is similar, but its flaws are more meaningful. The cheap construction means tilt is the only adjustment available, and the thin neck supporting the monitor allows plenty of wobble. Like an old car with blown shocks, even the slightest movement can make the monitor do a great impression of Jell-O.

Fortunately, a VESA mount is included, so you can bring your own stand. Given the stand’s weakness, and lack of adjustments, I recommend it as a mandatory upgrade.

There’s an input for that

The UHD Select Series covers its bases with connectivity, offering DisplayPort 1.2, HDMI 2.0, Dual-Link DVI, and VGA, along with a line-in for separate audio input. That’s an excellent array that bests most budget monitors.

Firing up the monitor’s on-screen control panel is easy. Like most, it uses several buttons, which are used to select through the menu. Each button is clearly labeled, so there’s little confusion about what it does.

The cheap stand jiggles like a car with blown shocks.

The menu itself, while a bit ugly, is also clearly labeled, and sub-settings are logically arranged. Quality settings include detailed adjustments for brightness, contrast, and gamma. Less detailed controls are available for hue, saturation, and color temperature – these can be adjusted, but don’t offer the precise control that an expert user wants.

There’s also a plethora of extra, poorly documented features, ranging from noise reduction to super resolution, most of which aren’t useful. Some users may appreciate the picture-in-picture and picture-by-picture functions.

A pair of two-watt speakers are included. They produce sound, but that’s about the only positive thing I can say about them. They’re not even oriented towards the viewer, so most of their meager volume is lost if the monitor is pushed up against a wall.

I set up the UHD Select Series after using the excellent Acer S277HK for several months, and the off-brand competitor didn’t fare well out of the box. The default color quality is way too cool, giving content a sterile, clinical look. That’s a common problem for any LED backlit monitor, but it was particularly bad in this instance. Colors looked drab and lifeless, especially in landscape scenes that prioritized greens (like a forest) or reds (such as a desert) over clear blue skies.

The calibration report showed the problem was primarily the color gamut, which reaches only 94 percent of sRGB and 70 percent of AdobeRGB. Those aren’t terrible figures, but they’re the worst we’ve yet recorded from a 4K display.

There were some perks to the monitor’s performance, however. It managed a respectable contrast ratio of 640:1, an average color error of 2.88, and hit the ideal gamma performance of 2.2. While it’s no class-leader in these more technical aspects, it’s on par with more expensive alternatives.

I fired up our calibration utility to see if more could be squeezed out of the display. That answer was yes – but not enough to make the UHD Select Series a performance stand-out.

While the monitor comes through in gamma, it stumbles in color gamut.

After calibration, the display’s gamut slightly improved to 95 percent of sRGB and 72 percent of AdobeRGB. Color inaccuracy was almost cut in half, to hit a new delta error of 1.5. Anything below one is considered generally unnoticeable to the human eye, so that’s a decent result. Performance was largely unchanged in other areas.

While the numbers seem to have barely changed, they made a big difference in visual quality. The extremely cool look of the stock picture was partially tamed, allowing other colors to come to the fore. That helped to create a more vivid and lifelike picture. Color temperature was still too cool, though. It was most noticeable in bright, white screens, which were obviously tinged blue rather than pure white.

Datacolor Syder5Pro ($140)
The Spyder5Pro is a great, reasonably affordable way to calibrate your monitor for maximum color accuracy and contrast.

But you don’t get what you didn’t pay for. The monitor performed well in certain areas, such as gamma and contrast, but it came in behind the curve in color gamut. The result? Picture quality that’s not in the same league as many competitors.

4K for $400 could be appealing if the alternatives were expensive, but they’re not. The CTL X2800, which is better in most respects, is also $400. The far superior Acer S277HK, which embarrasses the Select Series, is $150 more. Most stunning is the Dell P2715Q, an astoundingly good set, which is now sold for as little as $520.

This Monoprice seems built for a world where 4K is inaccessible, but this isn’t 2014. While still a bit costly, 4K monitors are no more expensive than 1440p panels from a few years back, and excellent examples are flirting with the key $500 price point. Monoprice isn’t winning this race to the bottom.

What to look for in a gaming monitor