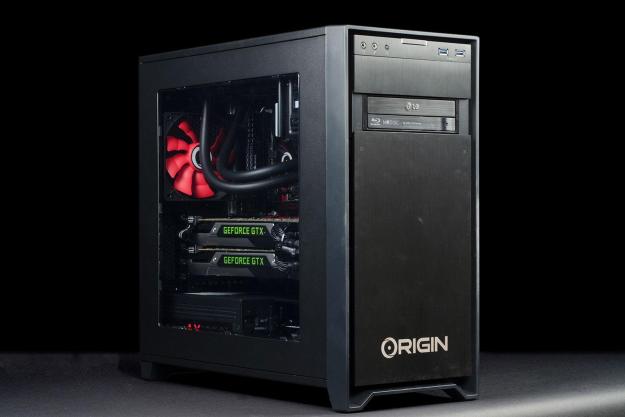 “The Origin Millennium is almost endlessly customizable, easy to upgrade, outrageously powerful, and yet not as expensive as most competitors.”

Make sure to check out our review of the 2014 model.

Two years ago Intel released a pair of monstrous processors, the Core i7-3930K and 3960X. We tested the latter in the Maingear Shift in May of 2012, where it set, and has since held, our computing performance record by a margin of 50 percent.

This incredible feat was made possible by a seemingly simple addition: two extra cores. Intel, unlike AMD, still uses quad-core processors for its flagship lineup, making these chips a rare exception. Despite the speed of the six-core parts, a successor was rarely hinted, leaving some enthusiasts to worry quad-core would remain the norm. Until now.

Intel has finally unleashed a new pair of six-core processors rather predictably called the Core i7-4930K and 4960X. Boasting six cores, a clock speed up to 4GHz, and the Ivy Bridge architecture, these titans look set to sweep records.

Gaming boutiques, as usual, have leapt on the release as an opportunity to build systems with outlandish performance. Origin has chosen the Millennium as its platform to harness the absurd power of these new processors. The result is an incredible six-core, twin-GPU, twin-SSD powerhouse packed in a surprisingly small mid-tower frame.

Sounds great, right? But as with all such systems, the price is a shocker; just over $4,000 as equipped. While the Millennium is far from the most expensive desktop we’ve tested, it may still have difficulty living up to the expectation set by its price. Is this the ultimate gaming desktop, or a poser?

Maingear’s Shift, the only other desktop we’ve reviewed with a six-core Intel processor, was a towering behemoth so large it barely fit beneath a typical desk. Origin’s Millennium, by contrast, arrived in a small, svelte Corsair 350D enclosure.

Measuring just 8 inches wide and 18 inches tall, this mid-tower powerhouse is a sign of computing’s new reality. Improvements in efficiency have made giants obsolete; all the performance you could hope for can now fit in a tower no bigger than a Dell sold at Staples. Other cases can be selected for the Millennium during configuration, but even the largest stands only 20 inches tall.

Case selection is a somewhat unique option made available by Origin (Cyberpower does it, as well). Though it gives buyers the chance to pick an enclosure with the look and features they want, it also prevents the company from adding much to the system’s look. Besides the logo on the front, and a Windows serial on the back, there’s nothing that externally differentiates our review unit from a home-built desktop with the same components. This may seem a trivial point, but competitors like Alienware and Falcon Northwest offer far better external design, and it’s not unreasonable to think buyers spending $4,000 on a desktop might care about style.

Functionally, however, we have no complaints. The front panel includes two USB 3.0 ports along with headphone and microphone jacks, and the rear panel adds two more USB 3.0 along with six USB 2.0, eSATA, SPDIF out and 5.1 audio. The twin 780 GTX video cards serve up four DVI, two HDMI and two DisplayPort; however, a maximum of six monitors are supported.

Small on the outside, big on the inside

The 350D is a small case, but that doesn’t mean it’s difficult to work with. Opening the side panel is a simple matter of removing two thumb screws and tugging, and once open, everything inside is immediately accessible.

The hard drive cage is rotated 90 degrees so that the drives “face” the side, rather than the rear, making it possible to remove them without also removing the pair of massive GTX 780 video cards. And while a water cooler is used by for the CPU, it’s relatively small, and the radiator is connected to a top-mounted fan to prevent it from partially obstructing ports on the motherboard. Only the optical drive cannot be easily accessed, as the RAM partially blocks it.

Cooling is provided by intake fans at the front and exhaust fans at both the rear in the top. While the front fans are normally covered by a solid front panel, that panel can easily be removed to improve airflow, change the look, or provide access to the front cooling fans. The right side panel is also easily removed; only the enclosure’s top and bottom are permanently attached.

While the Maingear Shift we reviewed with the last generation of six-core Intel parts had a Core i7-3960X, our Millennium review unit has “only” a Core i7-4930K, the less powerful of the two six-core processors available. Despite this disadvantage, the Origin still managed to essentially tie the Shift, slightly beating it in the processor arithmetic benchmark (scoring 213.46 GOPS against 209.57), but slightly losing in 7-Zip’s compression test (scoring 39,059 against the Shift’s 40,678).

Origin’s Millennium is everything a hardcore gamer could ask for in a desktop PC.

PCMark 7, our general system test, spit out a score of 6,429. This is second only to the Falcon Northwest Fragbox and represents very strong performance in all areas. Storage performance is particularly good, thanks to the pair of Samsung 840 solid state drives, and PCMark 8’s storage benchmark returned a record-setting score of 5,030.

Intel’s new processor is certainly the star of this show, but Nvidia is strongly represented by the Millennium’s pair of GTX 780 video cards. Just one can provide jaw-dropping numbers in 3DMark; together, they obliterated our records with a Cloud Gate score of 35,719 and a Fire Strike score of 13,734. These figures beat previous records by more than 35 percent, and are three times higher than the numbers produced by Acer’s Predator G3, a recently tested low-budget gaming desktop.

We tested real-world gaming performance with The Elder Scrolls V: Skyrim, Deus Ex: Human Revolution and Rome II: Total War. The Millennium didn’t flinch for a second, playing all games at 60 FPS with maximum detail and 1080p resolution. Deus Ex reached particularly absurd heights, playing at an average of 154 FPS with everything turned on.

Your own personal jet turbine

Though extremely powerful, our Origin Millennium review unit was also, in some ways, rather basic. The cooling system, for example, consists of a handful of fans and a CPU water cooler with a single, small radiator.

This is more than adequate to keep temperatures in check, but unfortunately results in very noticeable fan noise. We recorded 43.5dB at idle, a figure that rose to 50dB at full processor load and reached a peak of 52dB during our graphics stress test. And while internal temperatures were never a problem, that’s only because the Millennium puts out the heat; this desktop can double as a space heater at full load.

Power draw proved to be high, too. We recorded 106 watts of consumption at idle, a number that rose to 254 watts at processor load. Gaming, meanwhile, spiked power draw at a staggering 662 watts, the highest we’ve seen since we started recording power consumption about one year ago.

This is the inevitable result when two of the world’s most powerful video cards are combined with the world’s second most powerful consumer CPU. Still, buyer beware; this desktop draws enough power to make a dent in your bill.

Origin’s Millennium is the perfect platform for high-end computing in 2013. Though this system boasts incredible power and set new records in several benchmarks, it is no larger than the $400 desktops sold at brick-and-mortar retailers, and can easily fit either on top of, or under, almost any desk.

The $4,000 price is reasonable, as well. Though that’s no small sum, most competitors want even more; a similar Falcon Northwest Talon is about $4,300 and Maingear’s Rush sells for a whopping $6,200, albeit with elaborate water cooling. The Maingear Shift, without water cooling, is still more than $1,000 more, and also much larger.

Though not aesthetically impressive, and often loud, the Millennium is a well-built machine that provides great upgradability and incredible power in a small package. We don’t think gamers could ask for anything more in a gaming desktop.