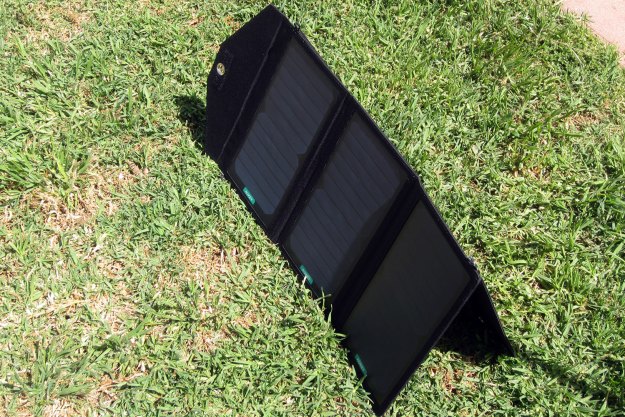 “Aukey’s 20W portable solar charge is perfect for powering devices in the wilderness.”

Nowadays few of us would consider “roughing it” in the wilds without taking along at least a smartphone, and perhaps even a tablet or laptop. The problem with that is, when we get too far away from civilization — or our cars, at least — for more than a day or so, there’s no way to keep our mobile devices charged. You can take along a portable battery pack, but if you’re off the grid for very long at all, then the issue becomes keeping it charged. The answer, of course, is a solar power charger, such as the Aukey 20-watt Portable Foldable Solar Charger ($50) we’re reviewing here today.

There are scores of portable solar power sources available, ranging from $30 to $300 and beyond. Some, such as the Kogalla Solar Storage Bank ($200), come with rechargeable batteries that allow you to store power for when the sun is not shining. Others, including the ECEEN Foldable Solar Charger ($34) and today’s review unit, the Aukey 20W solar charger, do not. Many come with only one USB port, though, whereas the Aukey model comes with two. Designed with the backpacker in mind, it’s the only $50 solar charger we know of that generates enough juice to allow you to charge two mobile devices at full power at the same time.

While unpacking Aukey’s portable solar charger, our first impression was that it’s rugged and very well built. Folded up, it measures 12 inches wide, by 6.9 inches deep, by 1.2 inches high, and resembles a small black canvas handbag. Consisting of three solar panels, it unfolds to measure 19.7 inches wide, by 12 inches deep, and 0.2 inches high. It weighs just under two pounds—not a lot to add to the load of your backpack. Designed to stand facing the sun or attached to your backpack as you walk, it comes with four chain-link-like fasteners that hook into nylon loops at each of the panel’s four corners.

A flap on the back of the center panel opens to reveal a mesh bag with zippers for holding your mobile devices, cables, and other accessories. Inside the bag resides a small metal box containing a two-port USB charging mechanism. Aukey says that for the most part the solar charger itself is waterproof, but admits that the USB ports and charging apparatus are not. In other words, it will hold up to a little rain, but it’s not immersible.

Where the Aukey solar charger stands apart from its most direct low-cost competitors is its three 7W panels, which combined absorb around 20 watts of solar energy. That converts to five amps of charging power split between the two USB ports, or about 2.4 amps per port. Aukey says that the solar unit has a power conversion efficiency rate of 23.5 percent, which is, for the techies among us, indeed efficient.

While 2.4 amps may not sound like much, here’s a little perspective: a PC USB port delivers about 0.5 amps; an iPhone charger provides 1.0 amps; and an iPad charger (and several other tablet chargers) is rated at 2.1 amps. Hence, 2.4 amps is more than enough to charge most mobile devices. In most cases, the Aukey 20W solar charger should charge at speeds comparable to a standard wall charger.

As mentioned, there’s no battery. This panel is designed to charge your mobile devices directly. On overcast days, or when you’re hiking beneath a never-ending canopy of trees, you’re out of luck. But Aukey’s solar charger is inexpensive enough that you can afford to buy a small portable battery, such as, say, ChargeTech’s Plug, or perhaps something cheaper (with lower capacity, of course) like the LinearFlux PokeCharger Portable Battery.

The Aukey Portable Foldable Solar Charger is a relatively light, well-built, and well-designed three-panel charger that generates enough clean renewable energy to charge two mobile devices (yours and your hiking partner’s) at about the same speed as a wall charger. It doesn’t come with a battery for charging when you’re not hiking or camping in sunny conditions, but its low $50 price tag makes purchasing a portable battery a viable option.

When it comes to portable solar chargers, you really do have a lot of options, but not many that provide this much charging power at such a low price. The Kogalla Solar Storage Bank mentioned earlier is lighter, has a battery, and it too can charge two devices simultaneously. In addition, the Kogalla model allows you to charge the battery via a microUSB power source during no-sun conditions. But it costs significantly more.

After carrying it around with us for a while and using it to charge our mobile devices several times, it certainly appears to us that the Aukey 20W Portable Foldable Solar Charger will last awhile. Our main concern regarding durability is water resistance, or lack thereof, because the solar charger’s ports could let in moisture. Make sure you have a water-tight pack to stow it in on rainy days.

If you need to charge your mobile devices quickly and efficiently while you’re off the grid, we say yes—especially if you need to charge more than one device at a time. If, on the other hand, you prefer a more complete solution with a battery for additional power when there’s no sun, there are many of those solar options available, too. The bottom line here is that this is an useful, inexpensive solution.