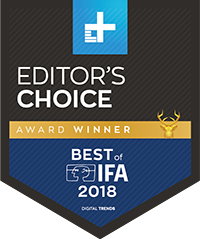 Maybe you’ve heard of IFA, the biggest technology show in Europe. Maybe you haven’t. It really doesn’t matter, because all anyone really wants to see are the hottest new gadgets, and IFA 2018 delivered them in spades. From wall-devouring 8K televisions to one of the most unique laptops we’ve ever seen, the biggest names in tech strutted their stuff in Berlin this week — and we saw it all.

As predicted, TVs were huge. Voice assistants were packed into absolutely everything. And even though we didn’t expect much in the way of laptops, a few in particular blew us away.

But with 1,805 exhibitors, not every single one was a star. We stripped out the duds and swept away the clones to find the best of the best, and they’re all right here.

An iconic luxury audio brand, Bang & Olufsen has a rich history of producing audio products with striking design and impeccable sound quality. The company’s new Edge speaker pulls off the tough trick of making a bold statement while remaining timeless in its aesthetic. It’s sound is massive, refined, and deeply satisfying, and its modern features make it a speaker that fits well into modern-day lifestyles.

If freedom from wires and premium sound is what you need from a pair of headphones, you should be looking at the Momentum true wireless earbuds. Sennheiser uses magnetic field tech instead of Bluetooth to connect the buds to each other, eliminating the latency and annoying dropouts we’ve experienced with headphones of this type. A slight boost in the mid bass makes them fun and engaging for music, while warm midrange and smartly smooth treble delivers the detail and richness Sennheiser is known for.

It should say something that Sennheiser’s first foray into home speakers is a sound bar which we consider to be among the best ever made. Armed with 13 drivers, this admittedly bulky bar produces enough bass on its own not to need a subwoofer, and produces virtual surround sound so convincing, you’ll literally go searching for speakers mounted about the room. At $2,000, it’s expensive, but it pulls of sonic tricks we’re not heard from a sound bar before, and it’s just as convincing with music as it is movies and TV.

Read more about the Sennheiser Ambeo

If you’ve ever wanted to stream your record collection throughout your home, this new spinner from Yamaha may be just the ticket. The Vinyl 500 connects to your Wi-Fi router and can stream music to any Yamaha MusicCast device in your home, including A/V receivers, wireless speakers, and soundbars. This allows you to place the turntable wherever you like without worrying about wiring it up, which makes it a uniquely alluring option for vinyl fans.

Getting solid Wi-Fi into every corner of your home with just one router is nearly impossible for many, so it’s no wonder mesh Wi-Fi systems are so popular, but this new system from Netgear goes several steps further. The Orbi Voice is part Wi-Fi Mesh system, part Alexa-enabled smart speaker. Developed in coordination with Harman Kardon, the speaker sounds great, too — way better than any of Amazon’s echo devices. It will set you back $430, but that’s about what you’d pay for a premium smart speaker and mesh Wi-Fi system anyway. The Orbi Voice just happens to kill two birds with one stone, and looks great doing it, too.

The Sony WH-1000XM2 were our number one pick for wireless headphones this year, and by a good margin. The WH-1000XM3 replace them and are even better. The best just got better, from battery life to sound quality, and that’s all we needed to know.

Available in three different sizes, Asus’ new ZenBooks made a big splash at IFA this year. Trimming bezels and cutting thickness, this new fleet of ZenBooks look ready to take on the best from Dell and Apple without losing their own unique sense of style. These new notebooks implement the latest Intel 8th-gen processors and even throw in options for discrete graphics while they’re at it.

Small additions like the touchpad that doubles as a number pad are fantastic, but the complete package is what has us so excited about these new ZenBooks.

Read more about the Asus ZenBooks

Thin laptops have existed for years. Powerful laptops are also easy to find. What’s rare is a laptop that blends both traits in a functional, utilitarian chassis with plenty of hardware options. Dell’s XPS 15 and HP’s Spectre x360 15-inch are the veterans of this niche, but there’s a new kid on the block. Lenovo’s ThinkPad X1 Extreme.

It’s the ThinkPad brand that sets this laptop apart. Dell’s XPS 15 is great, but it’s a flashy and sleek laptop that makes some functional sacrifices. Lenovo’s ThinkPad X1 is a different beast. It has an awesome keyboard, a choice of 1080p or 4K anti-glare displays, and gobs of connectivity, all packed into a 3.8-pound chassis. It’s a laptop built for demanding use by demanding owners.

Yet it’s also powerful, and even fun. It offers up to Intel Core i9 processors, numerous RAM options, and Nvidia’s GTX 1050 Ti Max-Q graphics. That last part is important, since it means this white-collar rig can turn into a gaming rig by night. There’s no need to own two PCs for work and play – the ThinkPad X1 Extreme can do it all.

Read more about the ThinkPad X1

Laptops are not usually something we swoon over, but the Lenovo Yoga Book C930 is so stunning, we fell head-over-heels in love the second we set eyes on it. There’s no physical keyboard, and instead you type on an E-Ink keyboard set under a piece of glass, which also works as a notepad with the stylus, and for reading ebooks. It’s paired to a beautiful 10.8-inch screen showing Windows 10, and the two are held together by a beautiful hinge.

If looking at it is an occasion, then opening it is the same. Rather than struggling to pry the two apart, you knock twice on the leading edge and the top half pops up, ready for you to open more naturally. It’s fun, innovative, and really eye-catching. That’s before we get to the power, and just how compact the Yoga Book is. It’s hugely impressive, and we can’t wait to use this one more.

The CJ79 has been the best ultrawide monitor ever since it was launched, but this year, Samsung has made its 34-incher even better. The headline feature is the Thunderbolt 3 support, though the increased image quality is what will excite gamers and professionals, now achieving 125 percent of the sRGB color space and a whopping 3,000:1 contrast ratio. It also performs well enough as a gaming monitor, boasting a 100Hz refresh rate, a 5-millisecond response time, and FreeSync support.

The best part? You can upgrade to the 43-inch or 49-inch versions if you want to go even bigger.

Read more about the Samsung CJ79

This stylish smartphone is incredibly comfortable in hand, with glass curving from front and back into a svelte metal frame. Sony has employed OLED for the first time in a phone, following its adoption in the TV lineup, and it brings all its considerable expertise to bear. This is one of the best displays we’ve ever seen in a smartphone, flanked by powerful speakers for a memorable movie-watching or gaming experience.

With typical flagship innards, it’s a fast device, and it also boasts the latest Android 9.0 Pie. A capable camera and a battery with stamina round out an impressive release, and the relatively high price is the only thing that gives us some pause.

Mobile processors are rarely exciting, but when the Huawei Kirin 980 was announced during the IFA 2018 keynote, it was accompanied by so many eye-widening statistics — from containing 6.9 billion transistors to two Neural Processing Units for onboard artificial intelligence — that it was impossible not to sit up and notice.

The Kirin 980 is all about offering more performance and better efficiency than ever before, and although we can’t experience these benefits in a smartphone right now, it’ll debut in Huawei’s next flagship phone — the Mate 20 Pro — in mid-October.

Part smart lighting system, part customizable art installation, the Nanoleaf Canvas is a wonderful way to decorate your home and will delight visitors. You can set colors, animated sequences, and more from a smartphone app, or using a voice assistant like Alexa, Google Assistant, or Siri. The light panels can even react to the music that’s playing, timing animated bursts of color to match the audio in the room.

The new, square panels are modular, clipping together in a pattern of your own design, and they support touch, sending ripples of mesmerizing color when you tap them. They are expensive, but you if you have deep pockets, a wall or ceiling covered in Nanoleaf Canvas would be stunning.

Read more about the Nanoleaf Canvas

Samsung’s 85-inch 8K QLED TV hits U.S. soil this year, and early impressions are very favorable. While little 8K content to feed this monster exists, Samsung believes its A.I.-powered upscaling will make everything it displays look excellent. With unprecedented brightness, HDR+ support, and some of our favorite user-friendly features on board, the Q900R has everything a luxury TV should, and is proof Samsung continues to push the boundaries of innovation.

Read more about the Samsung Q900R

The Casio WSD-F30 Pro Trek Smart is deceptively small. We say “deceptive” because the case is still 60mm wide, yet this is smaller than the previous version, and it’s surprisingly wearable thanks to Casio’s technical skill and understanding of what makes a good watch. Reducing the size this way is a complex task, but it has been completed without sacrificing battery life, and some innovative new features even extend the standby time up to a month.

Designed for those who love the outdoor lifestyle, our pick is the blue version, which flatters the hard lines and makes it highly wearable even on smaller wrists. While the price is high, the toughness and masses of custom app support, along with the GPS and offline mobile maps make it strong value. It’s an easy award winner, and one of our favorite smartwatches of the past months.