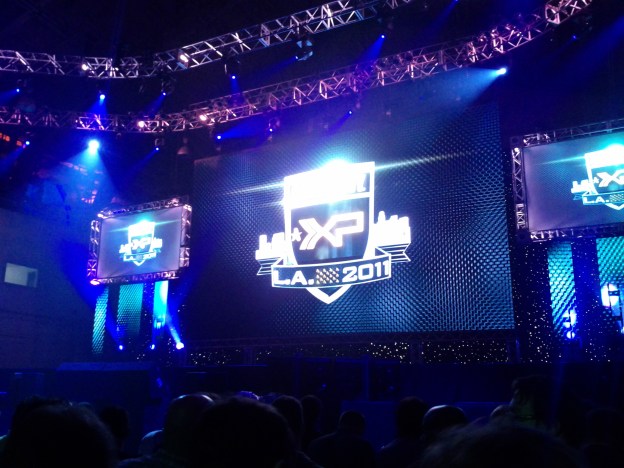 Call of Duty is a phenomenon. The last few titles have all made over a billion dollars, and the series has opened the world of online multiplayer competition to millions of people worldwide. If you personally don’t play Call of Duty, you almost certainly know someone who does. So when Activison announced that it would be hosting an event to celebrate the franchise, the gaming world paid attention.

But more importantly to gamers, the event will give several thousand fans the opportunity to play the new Call of Duty: Modern Warfare 3’s competitive multiplayer, co-operative Spec Ops mode and see Call of Duty Elite’s premium offerings. Last night, the press was given the chance to check out the games, as well as hear a few details about the future of the franchise.

The multiplayer debut showed off a few new tricks, including several changes to the way you progress your weapons, and how you utilize kill streaks. Check out our hands-on previews for more details on the multiplayer. But when it came to the press conference, the real show stealer was Elite.

Earlier this year, Activision announced Call of Duty Elite, a subscription-based plan that immediately had people screaming that Activision was moving towards a pay-to-play model. From what we saw at E3, the service appeared to be primarily a stat tracking tool that connected your Call of Duty games online, offered a few ways to connect to other gamers and gave a few new ways to track the way you played in the free version of Elite. More was promised in the premium version, but Activison wasn’t prepared to go into details at the time. They are now.

The call of Duty Elite premium program will cost $49.99 per year, and if you are a fan of the series, and someone that buys the map packs, then the service will pay for itself and even offer a discount.

When you become a premium member you will still have all the stat tracking that a free member has, but you will also receive several benefits. Not only will you receive the map packs as part of the cost, you will receive the maps–and all downloadable content–earlier than anyone else, and Activision is promising new content each month for premium members. Although it isn’t entirely clear what that monthly content will consist of, it could very well be a new multiplayer or Spec Ops map that the premium members will have long before those who plan to purchase the map packs individually.

But the real goal of Elite is to connect the Call of Duty community. To that end, both the free and premium services will offer ways for users to create and join groups. These groups will be user-created, and could be anything from fans of a certain sports team, to people that live in the same area. Users can join as many groups as they like to connect with people. There will also be clan-specific sections of Elite, where clan battles can be arranged. Elite will also connect directly with Facebook, and show you who among your friends plays Call of Duty. You will be able to message and send game requests from Elite to gamers through Facebook, offering more ways to connect.

Elite will also allow users to share their custom-created games. Modern Warfare 3 will have wildly customizable options, and those can be uploaded to Elite for all to download.

Of all the upcoming features of Elite, the most intriguing may be the video options. Whether a member is on the free or premium service, you will be able to share your best videos from the game, captured in the theater mode, and premium members will have 8 times more video storage capacity. But one of the more ambitious features of the Elite Premium will be the professionally created content.

Activision has enlisted several Hollywood powerhouses to come and create content for the Elite service. Justin Bateman and Will Arnet’s production company will be among the first, and they are working on a new online program called “Noob Tube,” which will take some of the more memorable videos captured from the games, and comment on them a la Mystery Science Theater 3000 and Tosh.0. Ridley and Tony Scott are also onboard and are currently working on something for Elite as well. It isn’t known what the directorial brothers have planned, other than that it will be episodic content celebrating Call of Duty. Expect announcements on more well-known celebrities getting involved with Elite in the coming weeks.

Another video service on the way will be the Friday Night Fights. This will pit certain groups against each other, including possibly rival athletes, facing off in the game. More details on this will be announced in the next few months as well.

There will also be a huge emphasis on contests, where you can win both virtual and physical prizes. Contests will be offered for all levels of player, regardless of skill level. The Elite beta is already working on this, and recently there were a handful of video-specific contests, including one where you were encouraged to set the best trap in Black Ops, then take the video and upload it for judgment. The entries were incredibly creative, and the winner received a 46” LCD TV. Expect more of that with Elite, especially on the Premium side. Those in the free version will still have plenty of chances to win prizes, but premium members will have the chance to win things like cars and vacations.

And there is still plenty more to come with Elite. It will be a work in progress, partly determined by the community that uses it. One thing is certain though, if you are a fan of Call of Duty, it is definitely worth the price. Although it wasn’t confirmed, it was strongly hinted that there will be (at least) four map packs for Modern Warfare 3, which purchased individually would cost $60. For that reason alone, it makes sense financially.

A one-year membership for the Elite premium package will also be included with the Call of Duty: Modern Warfare 3 Hardened Edition, or you can purchase the membership separately when it is released with Modern warfare 3 in November.

Call of Duty: Warzone tips and tricks to win the war