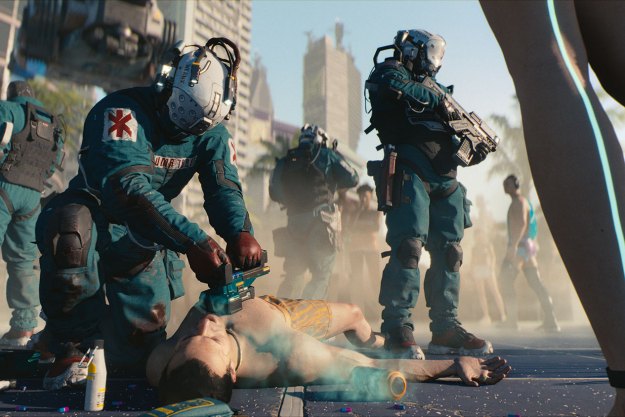 Cyberpunk 2077 looks like an astonishing evolution for action RPGs

“Cyberpunk 2077 takes choice-driven gameplay to the next level.”

Cyberpunk 2077’s player character is V, but the gameplay presentation at E3 2019 was all about me.

Open world RPGs that give you the freedom to tackle objectives in any manner you like are nothing new. Even CD Projekt Red‘s last epic RPG, The Witcher 3, offered. Cyberpunk 2077, however, is next-level stuff when it comes to player choice. You can complete the entire game without killing a single enemy. You can pick an origin story that affects how NPCs perceive and speak with you. You can tackle objectives in a dazzling number of ways, mixing stealth with fast, first-person shooting and a hacking mechanic that is undeniably wild.

My hour long, hands-off gameplay presentation showed off a mid-game mission. Last year, CD Projekt Red showed off the female version of V. This year, male V took center stage, embarking on a mission in Pacifica, a region in the enormous Night City that is more rundown than the neon lights downtown. While the graphics are nice, they pale in comparison to the trailers.

V rendezvoused with Placide, a powerful NPC who asked him to investigate a hostile situation in a nearby mall. The mall was inhabited by Animals, an aggressive faction who injects themselves with Juice to enhance muscle growth at insane rates. But first, he demanded to jack into V’s Personal Link. Everyone in the world of futuristic world of Night City is chipped — and letting someone jack in gives them full access to your brain.

To get to the mall, V hopped on a motorcycle. The vehicle controls looked tight, handling well around curves. Up until the lengthy mall sequence, the gameplay presentation highlighted the choice-based dialogue system. Dialogue options change based on your origin story, class, and skills, creating a choice-driven narrative.

After pulling around the back entrance of the mall, V scanned the area for Animals. Closeups showed off their red, bulging arms — the result of Juice abuse. At first, V went about his business stealthily, sneaking past Animals. But when he approached an enemy he couldn’t sneak past, V grabbed him, bashed his head into a garbage chute, and threw him inside it. That was just the start of the ways Cyberpunk 2077 lets you take down enemies.

Back in the main lobby, an Animal was sparing with a robot. Thanks to the hacking skills of Placide, V was able to gain access to the robot and throw a few devastating punches to knock him out. The presenter stressed that almost everything in Cyberpunk 2077 can be hacked. After saying that, V hacked into a bench press, and dropped it on a dude who was just trying to get some reps in.

Still sticking to stealth, V triggered a vending machine to dispense, then used a sharp Nanowire — basically a high tech whip — to slash Animals from afar.

In a room crawling with enemies, V used the nanowire to hack into a data truck, giving him control of the Animals. The results were brutal and showcased how unusual Cyberpunk 2077‘s approach to combat can be. V forced one Animal to pull the pin on her own grenade, and commanded another to shoot himself in the head.

Though tech gives you a myriad of unique and subtle ways to dispose of enemies, you can also force your way through them. The gunplay seemed competent during the gameplay reveal last August, but it looked great here. V moved quickly, ducking in and out of cover, firing off shots and watching damage numbers pop off from his target. The Animals move with lightning speed, dashing towards you. It honestly reminded me of Doom.

To demo how different classes and skills operate in the same scenario, the presenter switched to a female V Strong Solo build. Her bionic arms ripped a turret gun out of its stand, giving her enough firepower to kill Animals in rapid succession. Rather than hacking to open doors with the Strong Solo class, V could pry them open.

I wasn’t a fan of The Witcher 3’s combat, but CD Projekt Red seems to have evolved with Cyberpunk 2077. Skill trees (every open world RPG needs skill trees, right?) let you upgrade attributes across a lengthy number of categories. You can mix and match skills as you’d like. Cyberpunk 2077 doesn’t limit you based on class. If you want to be a sniper who also can tear enemies to shreds up close, you can do that.

The sheer endless ways to approach Cyberpunk 2077‘s conflicts has me excited to see how it all comes together to create a unique experience for each player.

I can’t talk about Cyberpunk 2077 without mentioning Keanu Reeves, who lends his likeness and voice to the rocker Johnny Silverhand. Johnny aids you on your adventure, offering advice. He glitches as he walks, and it didn’t seem as if other people could see or hear him. It’s like your own personal Keanu, there just to help you, and I’m ok with that.

The presentation didn’t showed off much of the world, but it’s clear from the downtown skyline of Night City that the world is quite large. Brief loading screens were present in the demo, but CD Projekt Red has promised that traversal will be seamless at release with zero loading screens.

I’m sold on the combat. The premise and world building also look great. The focus on body modification and large emphasis on physical appearances has been a point of scrutiny, but I’m hopeful CD Projekt Red’s vision will handle this concept with tact.

For the second straight year, Cyberpunk 2077 has mightily impressed us. It has exceptional promise. We’ll find out if it delivers on its ambitious vision when Cyberpunk 2077 launches on April 16, 2020 for PS4, Xbox One, and PC.