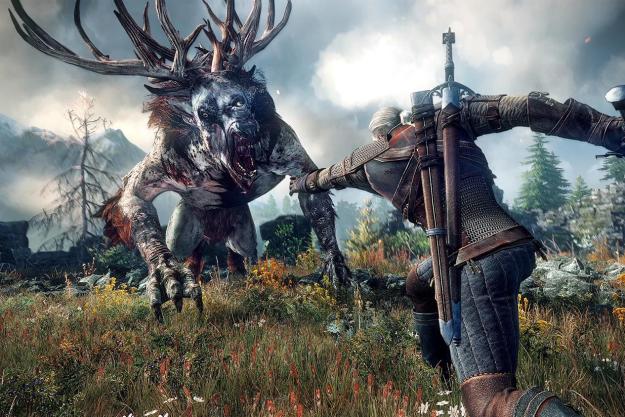 “The Witcher 3 is enormously ambitious, and a monumental game that engulfed us from start to finish.”

A griffin has terrorized local peasants for weeks. What do you do? Traditional RPGs have taught you to go find it and kill it. First, you grind up your experience by slaughtering a few lesser monsters, and then you slay the beast and collect your reward. Slow down – that’s not the Witcher way.

In this game, you might check the site of the attack, track the beast back to its lair, and learn why it’s suddenly grown so aggressive. Was its mate murdered? No wonder it went on the rampage. Now we know what kind of griffin we’re dealing with, and the state it’s in. The local militia probably won’t like hearing that this is their fault, and probably won’t even be very grateful after I’ve cleaned up their mess. Witching is lonely work, but someone’s got to do it.

A massive open world, but a single story

The Witcher 3 is big. If Skyrim is still the standard measuring stick for open worlds, The Witcher 3 is roughly 3.5 times larger at more than 50 square miles of land and sea for you to explore, and surprisingly little of it feels like filler. That expansive landscape is full of markers indicating treasure caches, bandit camps, places of power, and full-blown, multi-part quests for you to stumble upon. This is not Skyrim, however. You’re not going to spend weeks furnishing your strongholds and becoming king of the bandits. There is a lot to do and find, but the primary story is still the main course.

Unlike other open world RPGs that offer a full suite of customization options for your character, in The Witcher 3 you necessarily play as one, particular man: Geralt [sic] of Rivia, the eponymous witcher. Witchers are a class of specialized monster hunters, kidnapped at a young age, altered through magical and alchemical mutations, and rigorously trained in order to be a perfect, monster-killing machine. They are simultaneously revered for their skill and loathed for being different.

At the start of the game, Geralt is searching for Ciri, a young woman whom he essentially raised. Because of her magical lineage, Ciri is an immensely powerful sorceress – so much so that she has attracted the attention of the eponymous Wild Hunt, a terrifying and interdimensional band of riders who want to abduct her for their own sinister ends. Much of the game’s action in the first half revolves around tracing Ciri’s progress through the northern realms as you try to catch up with her before the Hunt.

Traditional RPGs have taught you to go find it and kill things. That’s not the Witcher way.

Geralt is a generic action RPG protagonist: a white, grizzly-voiced man for whom bad guys fall and women swoon. Yet, somehow he manages to feel more specific and likeable than he really should. He has a dry sense of humor that gives some of the more tediously conventional quests a necessary knowing wink. Two previous games and a series of novels have grounded Geralt with a sense of place and history. A side effect of his witcher mutations is emotional suppression, which serves as a perfect in-game justification for the sardonic, muted acting style that he shares with many of his video game protagonist peers.

It’s a little like Game of Thrones, complete with sexism

Like Game of Thrones, The Witcher’s world stands in stark, grizzly contrast to the bucolic, medieval heroics of friendlier mainstream fantasy. Personal narratives flow seamlessly into the rise and fall of nations, and a direct line is drawn from the whims of the powerful to their brutal consequences for the lives of the downtrodden. Geralt is caught between these two poles. His services are needed by both, but embraced by neither.

However, also like the HBO series, The Witcher 3 is permeated with a problematic sort of soft sexism. Violence against women is readily used to add gritty color. While there are numerous strong female characters with fully-developed personalities and agency, they are consistently dressed in comically low-cut tops and share a very narrow range of visually-pleasing body types. While The Witcher 3 is certainly not the most egregious offender out there (and is miles better than the first Witcher’s collectible cards for bedding women mechanic), the game is nevertheless still rooted uncritically in the white, heterosexual, male perspective that permeates mainstream gaming.

That being said, within that framework it does an excellent job of telling complex, human stories. Frequently, the monsters you are contracted to slay are deeply connected to the lives of the people who hire you. An example is a demon who preys upon the guilt and suffering of a man who let his brother die many years ago, convincing him that the voices he hears are vindictive gods ordering him to mutilate himself in atonement. Monsters as metaphors for human foibles is an old trope, and it works especially well here. The game draws deeply from European folklore, which gives these quests a mythic resonance.

The choices presented to you are also never reduced to the reductive moral binary of games like Mass Effect. Like real life, it’s difficult to tell what will ultimately result from your actions, with unanticipated consequences often popping up hours later in unexpected places. Sometimes your choice doesn’t matter anyway, but that’s okay. It all serves to reduce your ability to game the system and instead make choices based on actual roleplaying.

An early major quest involves spousal abuse, alcoholism, and a miscarried baby that turned into an evil spirit. Tricky subject matter like this is handled with grace, managing to walk the fine line of being humanizing without excusing the violence. The writing throughout the game’s many, many quests is consistently thoughtful, and often human, funny, and surprising. The facial animations are also particularly on point and the voice acting is generally solid, which strongly supports the experience where other games have had good writing undermined by dead-eyed delivery.

A gorgeous game with satisfying combat

Complaints making the rounds about a “visual downgrade” from early demonstrations are entirely beside the point: this is a gorgeous looking game. From dramatic wilderness vistas to bustling city streets, the world is thoughtfully designed. Areas that would easily read as copy/pasted and generic in a less thorough game are granted enough visual detail to feel specific and lived-in. The Northern Realms are a wonderful place to get lost in. Although a fast travel system between sign posts can help shuttle you from objective to objective, it is often far more rewarding to simply ride the long way and take in the sights, seeing the crowded alleys of Novigrad seamlessly give way to the murky swamps of Velen.

Combat is tactically satisfying to get the hang of, but ultimately can feel stiff and unwieldy. A large part of the strategy revolves around the fact that attacks from the rear do more damage; much of combat revolves around positioning. Geralt always pushes forward with every attack, which can be useful for driving opponents apart, but can become extremely frustrating when exact location is a concern. In an early quest, Geralt has to defeat waves of enemies while staying within the small, protective dome of a magic shield, and his relentless forward momentum makes this an unnecessary challenge.

The camera can also be crippling at times, especially indoors. Timing is key in combat as you dodge and strike, and the camera will sometimes swing around to awkwardly obscure the action at precisely the worst moment possibly. Although you can correct it with the right control stick, sometimes a moment of confusion is all it takes to end up as Troll food.

If you’ve never played a Witcher game before, this is a great place to start.

Although there is definitely a degree of grace to be found in mastering the rhythm of combat, it never achieves that euphoric flow state that you can find in Middle-earth: Shadow of Mordor. Those two games actually complement one another somewhat perfectly. The fluid combat and dynamic open-world systems of Mordor, combined with the textured world-building and sharply written, compelling storytelling of The Witcher 3 would make the perfect action RPG for the current moment.

Like Mordor, The Witcher 3 is not a radical leap forward, but satisfying culmination of past games.

While longtime fans of the books and games will find plenty to reward them, Witcher 3 is also far and away the best entry point into the series. If you’ve never played a Witcher game before, this is a great place to start. In many ways, this is the same game that CD Projekt Red has made for almost a decade, but with the edges sanded off. All of the signature systems like alchemy, skill progression, and mutagens are there, but unified into a more cohesive and streamlined whole than ever before. Inventory management can be clunky, but promised UI improvements in upcoming patches may help address this.

While not without its flaws, The Witcher 3: Wild Hunt is a monumental game. It is enormously ambitious, and mostly succeeds in what it sets out to accomplish. Minor quibbles are easily set aside because the overall experience is so engrossing. It was an extraordinary exercise in restraint to play this in expedient review mode, but now that I have completed it, I look forward to going back to start all over again and play at a pace more in line with my compulsive completionist RPG roots.There aren’t a whole lot of games like The Witcher 3 in existence.

This game was reviewed on Xbox One with a code provided by the publisher.

Fortnite’s Fracture event will end Chapter 3 much sooner than expected
The Witcher 3’s long-delayed current-gen update launches this December
Fortnite Chapter 3, Season 4 guide: All week 8 quests and how to complete them
Best Nintendo Switch deals and bundles for November 2022
Sonic Frontiers is getting new playable characters and story content next year
How to evolve Dunsparce into Dudunsparce and how to get a three-segment Dudunsparce
How to evolve Finizen into Palafin in Pokémon Scarlet and Violet
‘Wordle’ today, December 1: Answer, hints, and help for word of the day (#530)
Grieving in Elden Ring: my quest for closure in The Lands Between
Don’t miss this (Oculus) Meta Quest 2 bundle deal – save $50
Best Gaming PC Deals: Save on Alienware and HP
Xbox Game Pass adds Lego Star Wars and a former Switch console exclusive
Summer Game Fest returns just before E3 2023 next June