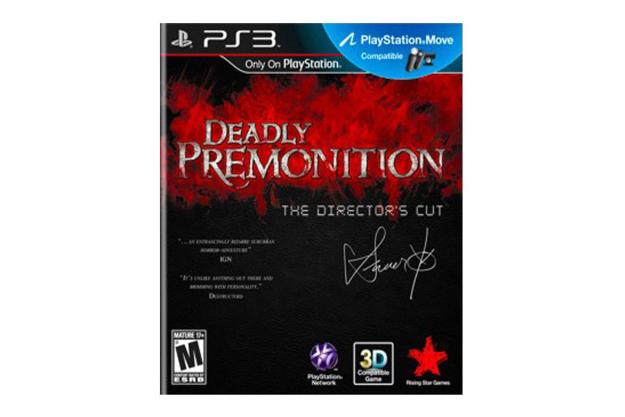 “The original Deadly Premonition was intriguing, but broken. The Director’s Cut fixes a lot of that, but keeps the weirdness.”

“There’s definitely something in this town. Do you feel it, Zach? My coffee warned me about it.”

Francis York Morgan, Deadly Premonition’s affable FBI special agent, is decidedly idiosyncratic. As a criminal profiler, he tracks killers in excessively brutal or disturbing cases, taking special interest in the murders of young women. He conveys his observations, hunches, and questions out loud to his imaginary friend, Zach. He is nonchalant almost to the point of ambivalence. And boy howdy, does he love his coffee.

Chances are this may sound at least a little familiar, either because you heard about Deadly Premonition when it was released as a 360-exclusive in 2010, or you’re at least peripherally versed in David Lynch’s Twin Peaks (Director Hidetaka Suehiro – aka Swery – certainly is). York’s origins as a reflection of Twin Peaks‘ Special Agent Dale Cooper are easy to spot, just as the rural Washington town of Greenvale is probably the quintessential game equivalent to the Lynchian hamlet itself. And much like Lynch’s surrealist ouvre, the quirky, clunky Deadly Premonition has either been utterly savaged or proselytized as gospel since its release, with its flaws dismissed as an inherent part of its charm.

So of course Swery decided to release a Director’s Cut.

The fact that a Director’s Cut of Deadly Premonition was ever something Swery was interested in isn’t surprising. Cult classics often warrant (or at least inspire) some form of re-visitations ­– even Lynch couldn’t leave Twin Peaks before he shot Fire Walk With Me to cap the series on a particularly horrifying note. Deadly Premonition’s candidacy for re-release is obvious just by looking at its visuals, oscillating between “Dreamcast quality” to “budget current-gen release.” So what makes Swery’s re-take a Director’s Cut, exactly?

By virtue of its subtitle alone, you might guess that this is mostly the same title, with maybe a handful of creator-added touches to complete the experience. That’s about right. New narrative content is, as it turns out, far less pronounced than more gamey and visual concerns, and though its original low-grade visuals never detracted from the game’s enjoyment the first time around, the upgrades are welcome enhancements.

As before, The Director’s Cut opens with a cutscene depicting a somewhat graphic discovery in a forest, the body of a young girl hanging from a tree. The scene is 98-percent unchanged from the muddy 360 edition, but it’s that two-percent that makes all the difference. With a close-up shot the corpse suddenly pops with detail, a gaping wound in the girl’s abdomen now much better defined than the comparatively abstract mess of pixels and aliasing it used to be. Then as the camera cuts back the graphics revert to their original state – a knowing wink from Swery, and certainly an intentional one.

This sort of bait-and-switch thankfully doesn’t extend to the game proper, but if you’ve played Deadly Premonition before the change is night and day. Environments in particular feel revived with a crisp definition that could almost be mistaken for new. York and the varied oddball citizenry of Greenvale (another narrative element heavily inspired by Twin Peaks) also look slightly better, though the effect on character models is less pronounced, mostly due to a shift away from the more garish lighting of the original release.

That said, The Director’s Cut doesn’t exactly put its best foot forward initially, marred inexplicably in places with audio glitches and pops, and a framerate that chugs at what looks like a heartbreaking 15-20 FPS. This may not sound promising, especially to newcomers ­– and it certainly needs to be addressed with the patch that’s already reportedly in the works – but nearly all of the game’s technical blemishes abruptly just sort of fade away after the first couple of hours. Even at its worst no problem makes the experience unplayable, and Swery’s at-turns offbeat, hilarious, engaging, and deeply unsettling narrative remains untouched.

Unsurprising to its old-school survival horror roots, Deadly Premonition’s biggest divisive factor is its original control scheme. York was unapologetically hard to control, like Leon on a wonky bender in Resident Evil 4, the tank-style navigation only exacerbated by lifeless aiming. That’s all gone now. The Director’s Cut takes a page from any number of recent, more action-oriented horror titles, which makes a bigger difference than you might think. Even the manual aim Move controls are pretty good.

Not that Deadly Premonition has ever been, or should be, known for its combat. The otherworldly enemies react with the same near-powerless response to nearly all of your firearms – and it should be noted that The Director’s Cut is both easier than its predecessor and retains all of the infinite ammo weapons that can be unlocked just by completing sidequests. Only the on-rails chase segments are as weirdly harrowing as ever, as you waggle the left analog stick back and forth to make York sprint away from an unnerving, invincible killer.

Driving actually plays quite a heavy role as well, forcing you to manually travel to various locations in and around Greenvale. The reason here is simple: like Hideo Kojima’s Codec conversations in the Metal Gear series, Swery wants you to take in the wonderfully strange conversations York has with Zach, discussing ‘80s pop cultural artifacts and providing insight into the agent’s magnetically unconventional personality.

Maybe the improved vehicle controls are something of a salve, if not an incentive. In the original game, driving was like trying to steer a shopping cart with greased wheels that’s skidding down worn-out asphalt littered with ball bearings. The cruiser you’ll likely be stuck with throughout your 20ish hours in Greenvale still maxes out at a whopping 50 MPH or so, and while it’s still a touch finicky, the improvement is noticeable. And yeah, you can with some difficulty acquire a fast travel item to skip all the driving segments, but if you do, you’re kind of missing the point.

In case you haven’t already figured it out, Deadly Premonition is the kind of game that – mechanics aside – you play because it’s just too damn engrossing to put down. What seems at first to seem to simply be Twin Peaks: The Game gradually finds its own identity, often due to a sense of fascinating Japanese appropriation to American culture (and whose Lynch impression feels somehow more genuine than the Western-developed Alan Wake’s generic sensibilities).

Deadly Premonition’s appeal is in its details, both goofy and creepy: the way that York taps his finger on his chest when he’s talking to Zach (which, if it wasn’t clear, is Swery’s meta way of addressing the player), his awkward interactions with NPCs, how you rarely hear more than five or six tracks on the soundtrack, and the game’s amusing tendency to repeat small segments of them over and over during the game’s lengthy cutscenes.

Alternately, there is the mystery at the heart of York’s case, full of oppressive dread and dealing in themes that have arguably been left mostly untouched in Western games since Phantasmagoria, to say nothing of the punctuated moments of truly disturbing violence peppered throughout. As far as The Director’s Cut additions here, I’ll just say they add another layer to what was originally more straightforward and will likely make you long for more. Foibles aside, if you haven’t been to Greenvale, this is a must play. If you have, it’s still worth the return trip.

This game was reviewed on a PlayStation 3 using a copy provided by Rising Star Games.

The PS5 games with the best graphics
Metal: Hellsinger beginner’s guide, 10 tips for slaying to the beat
A single-player Iron Man game is coming from the studio behind Dead Space
Cyberpunk 2077’s Phantom Liberty DLC not coming to last-gen consoles
All cross-platform games (PS5, Xbox Series X, PS4, Xbox One, Switch, PC)
Best gaming PC deals: Get a new desktop rig from $530 today
The best N64 games of all time
The best games on PlayStation Plus, Extra, and Premium
Best Prime Day Gaming Laptop Deals: What to expect in October
Skull and Bones: release date, trailers, gameplay, and more
Destiny 2: Where is Xur for the weekend of September 30
Ubisoft opens registration for Project U, a mysterious, ‘session-based’ co-op shooter
Dead Space Remake: release date, trailers, gameplay, and more