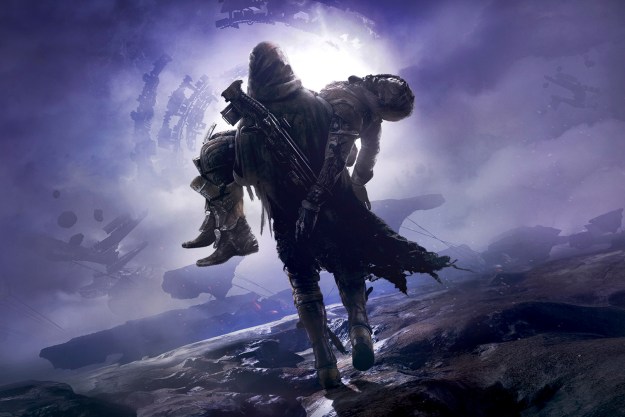 Bungie’s space-faring Destiny 2 is a weird game. One of its biggest problems, though, is that the developer seems unwilling to fully embrace that weirdness. Destiny 2: Forsaken, a big new expansion with lots of good ideas, takes a long time to hit is stride – but once it does, it’s a blast.

Forsaken is a more personal story than the big, world-threatening adventures players have previously faced. It starts with a prison break (in space!) and ends with the death of fan favorite Cayde-6 at the hands of an old Destiny character called Uldren Sov.

The setup puts the player on the path of seeking revenge for Cayde (who had the most personality of any character in Destiny 2, by far), by taking out Uldren and each of the Barons that helped him break out of space jail.

Players head to the “lawless frontier” of the Tangled Shore (read: full of bad guys, like everywhere), a set of asteroids lashed together to make something like a Wild West desert, to hunt the Barons and kill them.

This isn’t a sanctioned mission. Your goal is to kill those who murdered your friend, abandoning your role as protector of humanity for a personal crusade. Forsaken occasionally brings up that conflict, and mentions you’re hunting and executing criminals who would otherwise leave you alone. Is that what good guys do?

The climax to the Cayde-6 story is a frustrating, strange boss battle that makes no sense.

While the game asks that question, it never tries to answer it. Instead, Forsaken focuses on cool boss fights. You’ll take down one guy while battling on hovering “Pike” bikes; another Baron sets traps everywhere, forcing you to be extra vigilant (and use them against her); another uses decoys and sniper fire to try to take you out before you can corner and confront him.

It’s great that Forsaken makes each of the boss fights feel unique and fun, even if the Barons have little to nothing in the way of characterization other than their descriptive names.

The campaign culminates in the hunt for Uldren. The story hints it’s up to something weird that has to do with the Taken, a spooky set of baddies from the original Destiny. Here, though, Bungie is unable or unwilling to fully embrace its own ideas and premise, with the payoff to the tease hidden in the new end-game area called the Dreaming City.

The lack of closure makes the climax to the Cayde-6 story a frustrating, strange boss battle that makes no sense and doesn’t offer a satisfying end to the revenge tale, or any other plot point set up through the campaign. Players who want to understand what’s going on must dig up the context themselves as they play the post-campaign portion of Forsaken.

If the Tangled Shore is a fine, if somewhat underwhelming, new location for players to visit in Destiny 2, the Dreaming City more than makes up for it. This endgame location doesn’t even become available to players until after they’ve finished the story of Forsaken, and it’s the place where Bungie goes all-in on the weird, cosmic feel of the game, its story, and its best ideas.

Pound for pound, the most fun to be had in Forsaken is in Gambit, Destiny 2’s new multiplayer mode.

The City is a lot like other hub areas in Destiny 2, featuring public events, patrols, and bounties to complete. Yet it’s also rife with secrets — barely anything about the Dreaming City is explained or clear at the start, which makes it a fascinating location to explore. Uncovering what’s going on in the Dreaming City is constantly rewarding in Forsaken, with tons of new lore drops, challenges, and loot to uncover.

Thanks to the fact the Dreaming City is the location of, and mixed together with, Forsaken‘s new raid, it looks as though it’ll be a strange and interesting location for a long time. The completion of the first “Last Wish” raid unlocked new content in the Dreaming City, and Bungie says it’ll shift and change every few weeks.

As an answer to players’ constant demand for new stuff to do, the Dreaming City seems impressive — and those moments when the game’s entire community combine their efforts to uncover Destiny‘s secrets continue to be its best.

A winning gamble on Gambit

Pound for pound, the most fun to be had in Forsaken is in Gambit, Destiny 2’s new multiplayer mode. It’s a phenomenally smart idea that mixes all of Destiny 2’s best gameplay elements into a potent, heart-pounding formula.

Two teams of four players are separated into arenas, where each team fights bad guys as fast as they can. The enemies drop “motes,” little glowing items, when they’re killed. Players collect the motes and bring them to a central location to deposit them into a bank, and once a team banks enough motes, they summon a boss called a Primeval that they must kill. The first team to take down its Primeval wins.

The fun part is the gamble at the heart of Gambit. If you’re killed, you lose all the motes you’re carrying that you haven’t banked. There’s an incentive for banking a lot of motes at once, though, because doing so can send a “blocker” enemy into the other team’s arena, which they must stop and kill before they can put any motes in their bank. Then, to really spice things up, one member of a team can jump through a portal to invade the other team’s arena and try to kill them. The mode is full of risks that reward skill.

It all works together to make Gambit huge fun. It’s a perfect use of Destiny 2’s player-vs.-environment and player-vs.-player elements, and is excellent for diversifying the kind of play available to players. Gambit is fast, fun and competitive — a perfect combination of what the gameplay mechanics that make Destiny 2 so endearing.

Changes for the better

While there are plenty of other hooks in Forsaken — new strikes, new public events, new weapons to hunt down and new secrets to find — the most striking (and welcome) things in Forsaken are its changes to how Destiny 2 works.

With Forskaken‘s new progression system, Destiny 2‘s endgame grind is much less of a hassle to take part in.

Destiny 2 now tracks just about everything you do in the game in a list called “Triumphs,” which is basically a big snapshot of players’ Destiny 2 career. It’s a handy thing to have for organization, but more than that, it’s filled with goals for players to accomplish even after they’ve worked through all the content of Forsaken. The Triumphs list should help keep people engaged for longer in those gaps between content drops, and that’s great news.

Also great is the expansion of “Collections,” a big running list of all the guns and armor players have found in Destiny 2. A big organizational helper, the Collections menu allows players to get rid of all the crap they might be carrying around that they don’t need.

Lots of the loot players unlocked in the game can be reclaimed for a price from Collections, allowing players to just hang on to the best stuff. That’s a quality of life improvement that should make the entire loot side of Destiny 2 a little cleaner, while adding an extra incentive by showing players exactly what they’re missing, so they can go back out into the world to find it.

Though at first some of the changes seemed like the frustrating reintegration of systems from Destiny, after digging deep into the new progression system of Forsaken, it seems that everything has worked out for the better. Bungie has instituted more ways for players to grow their power levels once they’ve hit the “soft cap” at the end of the campaign in Forsaken, which means that while Destiny 2‘s endgame grind still exists, it’s much less of a hassle to take part in.

Forsaken is a new expansion for Destiny 2 and needs to be purchased separately. Apart from that, the game also includes microtransactions through which players can purchase some cosmetic items, though they’re not essential to playing the game. Forsaken has also added new “bounties” to its microtransaction system that give players new ways of earning some of the in-game currencies they might otherwise have to purchase with real-world money, so there are new avenues to earning cosmetic items through gameplay without paying for them.

Destiny 2: Forsaken is an expansion with some ups and downs, but once it gets going, the high points far outnumber the lows. The revenge tale Bungie might have hoped to spin feels half-hearted, like most of the storytelling in the Destiny universe, despite an abundance of strange and interesting lore to tap.

The boss fights, however, are wonderful. Destiny 2 is always at its best when Bungie is injecting creative alterations to the core shooter formula, and a lot of that’s on display in this new expansion. The lore becomes mystifying as the endgame takes hold, and Forsaken has a welcome influx of new locations and game modes.

Meanwhile, the changes to Destiny 2‘s systems have turned out to be almost universally for the better, and even if there might be a little more grinding in this new expansion, the game has been altered to make that grind less repetitive, less frustrating, and more of a reason to fire up once you’ve finished the story.

Destiny 2’s most direct and serious competition comes from Warframe, a free-to-play third-person shooter. Warframe is a lot of fun, but it focuses more on fast movement and building insane combinations of abilities over time. It might appeal more to loot fanatics, while Destiny 2 will appeal more to fans who want a shooter to be (almost) all about the shooting.

Other competitors, like The Division, have aged poorly and lack the constant expansions that keep Destiny 2 fresh.

Forsaken‘s story campaign can be finished in just a few hours, but there’s a huge amount of content in the expansion for players to explore that’ll take much longer to get through. This seems to be the best version of Bungie’s attempts to keep Destiny 2 interesting over the long haul.

Fans of Destiny 2 would be remiss in missing the best expansion of the game so far. Players who’ve thought about dipping a toe in won’t find a better version of a strong shooter — now’s the time to try it, since so many improvements have been made.