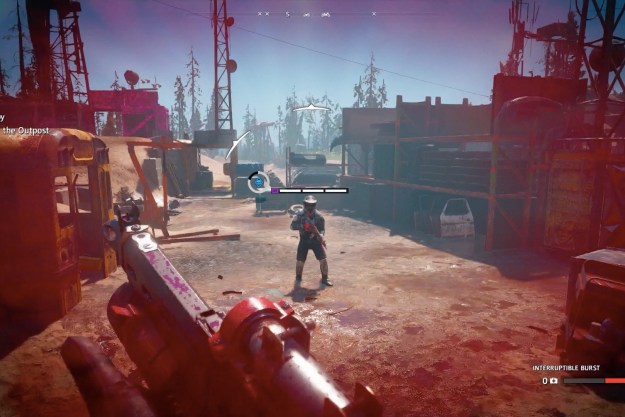 Review has been updated to include information about microtransactions.

The first true sequel in series history, Far Cry New Dawn plays more like an extension of Far Cry 5. I wouldn’t quite describe it as DLC, but it also feels odd to call it a sequel. It’s still set in Hope County, only this time it’s a ramshackle post-apocalyptic wasteland densely packed with flora and fauna, winding dirt roads, and decrepit structures.

The erosion of Hope County following the blast extends to Far Cry New Dawn’s central mechanics. There’s a huge emphasis on crafting gear and building up the makeshift settlement known as Prosperity.

New Dawn doesn’t break into uncharted territory with its setting or mechanics, but it does do enough with its systems to force you to change your approach to tackling the missions and exploring the open world. It’s a neat trick really, as essentially this is still the Far Cry we’ve seen on loop entry after entry.

The main storyline is a good bit shorter than Far Cry 5, but the setup compels you to take on some interesting side content in between missions in a way the series has often failed to do. This is a scaled back version of Far Cry, stripped down to where the small pieces and parts really matter.

The story sputters and at times it feels like deja vu of a game that came out less than a year ago, but New Dawn ultimately outshines Far Cry 5 in almost every way. It’s not an entirely new game by any means. It simply uses the framework of Far Cry 5 in better, more resourceful ways. It all comes together to create the best Far Cry game available on PS4 and Xbox One.

Getting crafty with it

Far Cry New Dawn takes place 17 years after the nuclear bombs were dropped on Hope County. Needless to say, basically everything was destroyed. The survivors set up residence in hopes of building Hope County back up again. Your nameless protagonist — you get to choose their gender — is helping to lead the charge. But if the resistance fighters have any hope of fending off the vultures known as the Highwaymen, Prosperity needs to get much stronger.

New Dawn has a cobbled together mantra. In the intro mission, you gather parts to craft the Saw Launcher, a crossbow made out of a chainsaw chain, bike handles, a circular saw, and random bits of metal. It’s the coolest weapon in the game, as the projectile circular saws clang off of walls and can strike multiple enemies in the process.

But it’s not just untraditional weapons like the Saw Launcher that require crafting. Everything from SMGs to sniper rifles needs to be made from parts scattered throughout Hope County. While you can still pick up weapons from dead enemies, you’re only going to find weak, level one weapons. These simply won’t do the job in mid to late game missions. Scavenge for parts or pay the price later.

Certain spots on the map are marked as search locations for parts. You need a combination of components to create each weapon. Exploring off the beaten path, such as buildings that have been submerged underwater and barns where only the roof remains, is a stark change of pace for the normally over-the-top series. Sometimes you’ll run into enemies in these areas, but often times it’s quiet.

Even with the overarching focus on crafting, I never felt like I was doing busywork.

Even the guns for hire require a cocktail of medicine, retrieved from plants, to be revived when they fall. If you neglect the hunt for materials, well you may be fighting solo from time to time, and you also may run out of medkits. The guns for hire and specialists aren’t always the most helpful, though it can get lonely out there in post-apocalyptic Hope County without a voice in your ear. My favorite companion, Timber, is a good boy who likes to sit in the cart attached to my motorcycle, wagging his tail in the breeze.

Vehicles, from trucks to choppers to ATVs, must be crafted as well. There are guns for hire that bring vehicles to your location and you can find abandoned cars and enemy vehicles to steal, but they aren’t available in excess.

New Dawn smartly integrates outpost liberation into the crafting system. Each of the eight crafting stations — workbench, explosive lab, garage, etc. — can be leveled up three times with ethanol barrels to create better equipment and tools. And it just so happens that the ten outposts are the best resource for ethanol. Liberating an outpost rewards you with ethanol barrels. Then you can “scavenge” the outpost for additional ethanol, return and fight tougher baddies to earn an even better reward. Each outpost has three difficulty levels, and their integration into the overall progression made me enjoy the series staple more than usual.

Even with the overarching focus on crafting, I never felt like I was doing busywork. I think that’s mainly because New Dawn slyly gets you to care about the less shoot-y activities. I was overjoyed when I realized I could level up the cartography station to get new treasure maps. Treasure locations are multi-step events that task you with eliminating a handful of baddies and then find away into the locked treasure room. On one treasure hunt, I had to ring a bell atop a dilapidated church to summon a bear who was wearing the key. I was rewarded for my efforts with enough parts to create an elite SMG which helped me get over the hump on a boss I was struggling with.

And for those worried about any potential boringness with aspects like treasure hunts. I shot the bear with a rocket launcher and watched it fly about 20 feet. This is still Far Cry. You can still create your own over-the-top explosions, even as you partake in the smaller events.

Plenty of New Dawn’s missions have a guns blazing attitude.

Perk points, which can be used to purchase new skills like takedowns and increase your inventory slots, often times go hand in hand with crafting. Certain challenges only unlock as you level up stations in Prosperity, and you’ll need higher level gear to complete a sizable portion of challenges to earn points to spend.

Crafting in Far Cry New Dawn is integrated in a way that gets you to check out everything it has to offer. From treasure hunts to outposts to expeditions to the myriad of random loot locations, I wanted to explore the open world. New Dawn gives you tangible reasons to do so, and the result is a greater appreciation for a powerful new weapon or devastating explosive device.

Since this isn’t a multiplayer game, in no way does this feel like a pay-to-win scheme. In fact, if you throw money at Far Cry Credits, you’ll be missing out on what makes New Dawn so fun by eliminating the need for exploration. The option is there, but it’s not a path that makes a whole ton of sense.

While most of the activities mentioned above are optional, they become rather necessary in the long run. The 22 story missions start off somewhat benign. Once you hit the later missions, you’ll be up against high rank enemies with tough armor that requires armor piercing ammo that’s reserved for higher tier guns. The final couple of missions feature some challenging boss fights that really reinforce New Dawn’s reliance on building up Prosperity to stave off the imposing threat.

Plenty of New Dawn’s missions have a guns blazing attitude, with waves upon waves of enemies, a myriad of explosions, and an aura of improbability around them. That’s great for fans who are looking for a traditional Far Cry experience. These missions work well, especially the late game ones. But there’s also a number of missions that have you holster your weapons.

In one mission, you impersonate a prisoner, creating bullets by hand alongside other prisoners before sneaking your way through the facility to eliminate your mark. In another mission, you solve a series of puzzles with the guidance of a familiar face. And in another, I competed in a gladiator style arena, no weapons allowed.

The new expeditions take you away from Hope County. All of them are heist missions that play out like more elaborate versions of outposts. The change of scenery and rewards are nice, but they don’t introduce anything truly new to the formula. That said, replaying them for better rewards, much like the outposts, proved to be a surprisingly fun challenge.

New Dawn strikes a nice balance here by allowing players to make use of the stellar first person gunplay in ample doses while also remaining grounded in the fact that this world is more desolate and slower moving than it was in Far Cry 5.

I’ve waited this long to talk about the actual storyline of Far Cry New Dawn because, well, it winds up as little more than background noise. The aforementioned resistance fighters of Prosperity are up against the Highwaymen, led by ruthless twin sisters Mickey and Lou.

Their reasons for wanting control of Hope County are not entirely clear. After all, the place is in ruins. It’s a lot of land of course, but the people of Prosperity are only occupying a small chunk of it. New Dawn makes use of a few flashbacks to attempt to humanize Mickey and Lou and inform other plot points. None of it ever really amounts to anything noteworthy, though.

Eden’s Gate, Joseph Seed’s cult, also makes a fumbling return. The two groups, New Eden and the Highwaymen, ultimately drive the story to its conclusion. Part of the reason why the story falters is because neither group has motivations that make sense. We already know Eden’s Gate’s followers are extremely misguided, but why in the world are they still together 17 years later?

New Dawn’s plot feels tacked on, though Far Cry games aren’t particularly known for telling quality stories. New Dawn’s is easily one of the worst because the main antagonists aren’t even developed enough to care about. Usually I cannot wait to finally kill the main antagonist in a Far Cry game. In New Dawn, I just wanted Mickey and Lou to go away so I could scavenge for parts in peace.

Since Far Cry New Dawn only touches on the main plot every few missions, it was fairly easy to ignore it altogether. The surrounding systems, the act of building up Prosperity and helping the characters who are more fully realized blocks out much of the disappointment. It’s a shame, though, because New Dawn could’ve been one of the best in series history if it had a more interesting narrative.

Far Cry New Dawn doesn’t feel like a true sequel to Far Cry 5. Instead, it repurposes the map as a post-apocalyptic wasteland and cleverly places the focus on scavenging for resources to make Hope County new again. The overarching emphasis on crafting compels you to explore the map far and wide, completing objectives both big and small. The result is a more rewarding Far Cry with a wider variety of missions and a deeper challenge. The story is bad, but it doesn’t get in the way. Overall, it’s the best Far Cry game available on PS4 and Xbox One.

It took us about 20 hours to finish the main story, but we also completed a bevy of side objectives in that time. It’s shorter than Far Cry 5.

Yes, if you’re a fan of Far Cry, you should buy New Dawn.

Updated on 2/15/19 by Steven Petite: Added section on microtransactions.