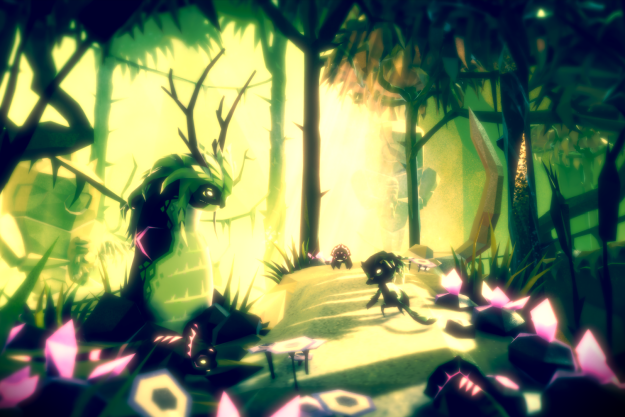 “Fe is a fantastically gorgeous game that invites you to get lost and discover life.”

Fe is a special game. Describing it is a bit like waking up and telling someone about a dream. It’s surreal, ethereal, and the details dissolve as quickly as they came, leaving you with a persistent feeling of peace.

That may not be how you’re used to hearing a game described, but it’s fitting, perhaps, for mega-publisher Electronic Arts’ first foray into incubating indie games. And with Fe, the game’s production is at least part of the story. It’s the passion project of Swedish developer Zoink, the first such partner for EA’s “Originals” brand. In the same way that 20th Century Fox Studios keeps their Searchlight label for foreign and indie films, Electronic Arts is looking tap that cultural cachet and make a splash with the more artsy crowd.

Now that Fe is out, the question is whether the game can fulfill those lofty expectations. Simply put, it does. Fe stumbles at times, but bears its soul to a lumbering games industry plagued with legal bouts and manipulative marketing. In so doing, it shows a hopeful way forward, and a brilliant, enriching new way to play games.

A curious, cat-like fox, you awake in the middle of a sleepy, surreal forest. The air glitters with some unknown, supernatural presence. As you move, the hues and tones of the world around you shift, moving from cool to warm, warm to ominous. But, in this solitary wood you can sing.

First and foremost, Fe stands in contrast to the bulk of modern games for how little it holds your hand. If you’ve played Thatgamecompany’s stellar 2012 game Journey, you may have some idea of what to expect, but Fe‘s got plenty of fresh surprises of its own. You will have almost no instruction at all while playing. There is no tutorial, no clear or obvious direction. Whether you ultimately get anything out of Fe will depend on how patient you are with not knowing — where to go, what to do, or what it all means. All Fe tells you to do is to sing and find other creatures frolicking between trees and dashing through streams.

When you find new critters, they’ll turn their attention toward you and listen for a moment. Then, you can sing to them. Sometimes, you’ll make a new friend — one that will follow you on your aimless journey for a while — and others a fuchsia blossom will open up and toss you into the air. Fe works based on this simple tack for play. Lost and confused, you simply poke around in the world and see what and whom you can sing to. Together, you scurry off and learn more about the woods you share, unearthing new areas and basking in the overgrown beauty of this sanctuary.

As you play, you’ll come upon all kinds of mystical areas. Giant deer, glowing caves, and serene wintry snowscapes are all aesthetic feasts, gloriously brought to life in a wonderland of mystery and magic. These are places that exist for you to inhabit, to merely exist within the space and take it all in. Offering a sense of connection to the life of the wood, Fe guides you by teaching you to build relationships and follow where those might take you. Fe invites you to say yes to life.

There are, of course, obstacles in the wilderness. Eerie robots known only as the “silent ones” are curious foes. They scan with harsh spot lights, watching at all times for cuddly forest critters and announcing their finds with alarming, discordant squeals. Shortly thereafter, they’ll pursue and paralyze anything they can see, carrying them off in mysterious black orbs that resemble cages.

Fe stumbles at times, but bears its soul to anyone who will take it.

As you might suspect from their name, the “silent ones” stand apart from the rest of the world. Where the friendly, fluffy mammals of the woods will hum along with you in harmonious tones, forming bonds, the silent ones are intrinsically frightening. Their aggressive stature and screeches are about as thematically distant as you can be from the woodland’s dulcet hymns.

Capture by one of these figures represents one of the only types of “death” that you can have in Fe — the other being a fall into certain bottomless pits throughout the world. While they play the narrative role of an invasive industrial force (much like the pipes and beams in Flower), Fe never quite feels at home with them.

Fe is at its best when you’re moving through its beautiful landscapes. As you hop with lizards or scurry with weasels, music always swells and pushes you further on a journey of discovery. It’s fitting, then, that the game’s closest figure to a proper antagonist hinder your path and place barriers on where you can and cannot safely go. That tension is great at times, and breaks up the pacing well enough, but it often needed a bit more time to let some of the quiet moments breathe between tense sections.

More specifically, when exploring, your path will, at times, be blocked by the Silent Ones, typically when you’re just reaching a new area, slowing your progress into furtive nudges. That keeps you from settling into it before you’re faced with obstacles. At the same time, though, once you’ve rid an area of its baddies, you’re free to explore it as you please, and there is something to be said for that generalized, expanding sense of freedom as you progress.

Fe is deceptively simple, but its minimalist design gradually reveals itself to be remarkably clever. The ability to sing and to move are basically all you have at your command, and yet there are many ways to solve Fe’s apparent challenges.

The forests of Fe are easy to lose oneself in, but you build familiarity with time: A subtle note here, a shift in the literal hue of the world there, or a path of sharp green flower petals surreptitiously leading your unconscious mind to its goal. Fe’s world is beautiful and magical in part because its many branching paths and hidden vistas are all there — in plain sight. You may pass through a valley a dozen times and not notice all it has to offer. That’s intentional too.

Not only does it allow you to move through what few areas of conflict there are in a new way every time, it teaches you to pay attention and to search on your own.

If you ever get truly lost — and we did quite a few times — no worries! You can always stop and sing as loud as you can to bring a guiding bird to show you the way. There is a single risk, however, to this. Namely that you’ll catch the attention of any nearby silent ones. This comes up again when you’re singing to other critters to ask for their help, but on a smaller scale (simply because you don’t have to sing super loud for the rest of the creatures). This is an excellent touch that adds a degree of real vulnerability to asking for help — you may find a receptive ear and a helpful hand, or you might be silenced.

Bringing it All Together

Fe isn’t something that should work. It’s a game about getting endlessly and repeatedly lost — something that is, quite famously, a pernicious frustration in video games. Fe counters that with a radical assertion: That getting lost is beautiful because life is beautiful. It begs us to explore, to learn, to do, to grow, to build, and most importantly to connect.

Fe is a simple game, yes, but it’s all about the connecting with others, opening yourself up, and letting yourself be vulnerable to life. You never know where future paths may take you, but you can bet there’s something beautiful waiting.

Fe is one of the most beautiful gaming experiences we’ve had in some time. It’s a brilliant little game that takes patience and attentiveness, but it rewards them well. There’s nothing else quite like it, and there probably won’t be for some time.

Arguably Journey, Flower, Abzu — but each of these games has a very different take on play. Which is best, isn’t really a question that makes sense, especially since these indie games often tend towards the shorter end.

It took us about fourteen hours to get through all of it, but we let ourselves get lost — many, many times. If you’re a bit more focused, you should be able to clear it quite a bit faster, but once you’re done the game world opens up and allows you to explore without any threats, which we wholly recommend you do.

Players who aren’t willing to relax a bit and let Fe take some control of their experience might have trouble, but most everyone else will find an affecting, unique romp through the woods backed by touching moments and some of the most inventive design to come from a major publisher in ages.

Fe was reviewed using on Xbox One using a retail code provided by the publisher.