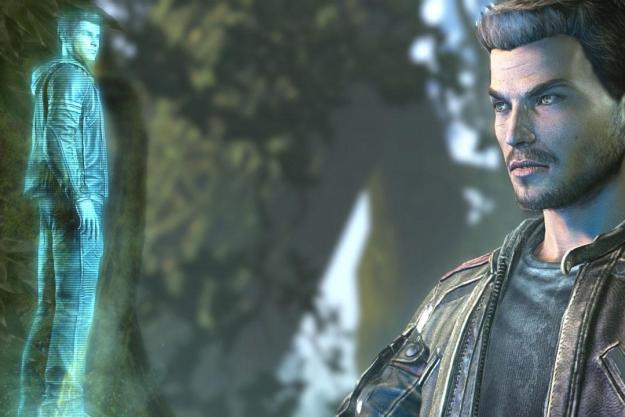 “VectorCell's 2.5D take on the PC classic Flashback amounts to a good remake, but not a great one.”

VectorCell’s remake of Studio Delphine’s 1992 cyberpunk adventure Flashback is like a Blade Runner replicant. It resembles a real video game – in this case, its predecessor from the pre-2000 dark ages of interactive entertainment – but it’s stronger, faster, and more dangerous. Is it better though? VectorCell clearly put a lot of effort into modernizing the original, but a handful of issues and downright baffling creative choices muck up what might have been an exceptional HD reimagining.

The new environments introduced in each level feel wholly unique, and together as a whole they paint an engaging sci-fi universe.

The future-world story remains the same as it was in the original, a goofy blend of concepts from They Live and Total Recall. Conrad B. Hart is a government agent who stumbles upon an invasion plot masterminded by a race of shape-shifting aliens. Certain that he’ll be captured and mind-wiped, Conrad creates a copy of his memories and leaves a trail that he’ll be able to follow if the worst happens.

Guess what? The worst happens. Conrad is a captured amnesiac when we meet him in the opening cutscene. He stages a quick escape on a stolen hover-bike (YES), only to promptly crash land in a jungle on Saturn’s terraformed moon, Titan. A convenient message left behind by Original Conrad catches Amnesia Conrad up on what he missed. How’s that for foresight? And so, your adventure begins.

You might have a hard time taking the synopsis above seriously, and that’s okay. VectorCell didn’t either. Conrad’s high-pitched, nasally voice and lame one-liners frame him as a sort of far-future Ferris Bueller. It’s refreshing to hear this silly dialogue in a genre that is commonly filled with grim people struggling to survive in an endtimes scenario. It’s hard to creation tension when you feel like that protagonist might, at any moment, start commenting on how fast life moves, and the importance of not missing it.

VectorCell’s biggest achievement in Flashback is the HD world. Fans of the original game will grin widely as they visit reimagined-yet-familiar locations; this is what you saw in your head back when ’90s computer could only handle 256 colors. New Washington’s future city is all clean lines and smooth surfaces. Death Tower’s win-or-die game show arena pulses with neon lights and glowing, see-through floors. The environments introduced in each level feel wholly unique, and together they paint an engaging sci-fi universe that you actively want to see more of.

VectorCell’s beautiful cyberpunk universe lives up to the promises of the 1992 original.

It’s clear as well that much thought went into the design of each space. The 2.5D side scrolling play feels like a cyberpunk take on Prince of Persia. Just swap the Prince’s sword with Conrad’s infinite ammo space pistol. Also like PoP, combat is infrequent; at its heart, Flashback is a puzzle-driven platformer. Conrad doesn’t feel quite as nimble as the Prince, and you can blame sluggish controls for that. Fortunately, timing isn’t a big issue with most of the puzzles, and they’re thought out well enough that you stop caring once you get a feel for the game’s rhythm.

Combat is more problematic. You aim using a standard gamepad’s right analog stick, with a laser sight marking the path that your bullet will follow. It’s a great idea in theory, but the aim adjustment is far too sensitive. This is especially problematic when you have to toss a grenade or some other thrown item into a specific location. There’s a helpful on screen guide that shows where your throw will go, but the overly sensitive aiming controls make the challenge of such moments less about the gameplay and more about a failure of mechanics.

Adding to Flashback‘s combat frustrations is Conrad’s shield, which can be used to block incoming enemy fire. The trick is to time your shield use just right; the energy field is only active for a brief period before it disappears, so you’ve got to hit the button at just the right moment. Unfortunately, the game’s cues for when you should pop out your shield are nearly impossible to read. If you’re waiting until the enemy makes a noise or enters into an attack animation, then you’ve probably waited too long. A successfully blocked attack is more a question of luck than of skill.

This new Flashback is more spiritual successor than direct translation, with some new features mixing in alongside the tweaked level layouts. A VR interface offers up an assortment of tutorial missions as well as a series of XP-earning challenges in various disciplines, such as combat, stealth, and the like. As you earn XP, Conrad gains level and skill points, the latter of which can be used to improve weapon effectiveness and health. These aren’t unwelcome elements, but they feel out of place, as if they belong in another game.

VectorCell’s beautiful cyberpunk universe lives up to the promises of the 1992 original. Fans will immediately appreciate what they see. Something’s lacking though. The goofy execution of the script and voice acting is jarring, but it’s an acceptable offense. The frustrating combat and sluggish controls are less forgivable, especially when so much of what’s wrapped around them seems so promising. Flashback is a good HD remake, there’s no question of that. But it isn’t a great one.

This game was reviewed on an Xbox 360 using a code provided by Ubisoft.