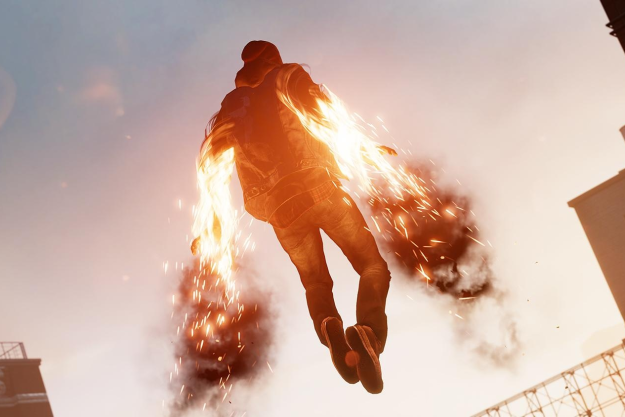 “Infamous: Second Son builds on the best of the previous games in the series, even while mired in repetition.”

There’s a good reason that Sucker Punch’s Infamous: Second Son isn’t titled Infamous 3. Second Son carries the DNA of the two previous Infamous games, but it introduces a new protagonist, a new story, and new powers. It’s a franchise reimagined, and a jumping on point for gamers, but it is still very much an Infamous game in the best way.

Delsin Rowe has powers that make him stronger, faster, and tougher than the average mortal, and how he uses those powers is up to you. If you want people to cheer you on and see you as a hero, you can follow the “Good” karmic path. If you like jumping off buildings and smashing everything on the street below with no regard for collateral damage, then you probably are going to be on the “Evil” path. In that, the game hasn’t changed.

One of the real highlights of Infamous: Second Son though, is traversing the impressively rendered city of Seattle.

Where Infamous: Second Son diverts from the previous games is in the powers themselves. Previously you had a single ability based on lightning. With the new protagonist, you lose lightning, but gain so much more.

The story starts seven years after the canonical “Good Ending” of Infamous 2, which concluded the story of Cole McGrath, and requires no knowledge of the previous games. You now step into the shoes of Delsin Rowe, a member of the Akomish tribe, and a slight miscreant. When he accidentally discovers that he is a Conduit – a person with super powers – he becomes the target of an oppressive government agency known as the Department of Unified Protection, aka the D.U.P., that is tasked with “regulating” (read: imprisoning) Conduits. Along the way Delsin becomes a champion of mistreated Conduits as he searches for the leader of the D.U.P.

Delsin loves his powers and isn’t weighed down by the responsibility of having them, and that makes him a relatable character and avatar for the gamer. He has fun, and we have fun with him, even if you send him down the evil path. He’s a memorable character in a somewhat forgettable story.

There are some twists along the way, but most of the time your missions involve finding things and blowing them up. More than once the game threatens to delve deeper into themes of redemption and/or corruption, but they are quickly forgotten.

One mission, for example, is meant to set up what you’d expect to be the beginning of either the redemption (or corruption if you go evil) of a character that just spent months killing people. Shortly after, that character then is completely changed. The bodies are never mentioned, the death toll is forgotten. The victims were drug dealers and so therefore don’t count, apparently, but there is no emotional payoff. This happens repeatedly through the story.

Despite all the shiny new features surrounding Infamous: Second Son, the game retains the franchise’s core identity. Infamous is, and hopefully always will be, about giving the gamer superpowers and an open playground to use or abuse them in. Everything else is details.

…even a demigod can grow bored of smiting foes.

Delsin’s power allows him to mimic the abilities of other Conduits he meets. Throughout the game he earns three Conduit powers (and a fourth after the story ends) that are charged by feeding off the matching element found in the world around him, like smoke or neon lights. Switching between abilities once you unlock them is just a matter of finding a source, which is easy enough in the intricately crafted city of Seattle.

All of Delsin’s power offer a similar move set, though with their own unique twist. All the powers have a projectile, for example, but Smoke offers a grenade the others don’t, while Neon allows you to move at super speed. The game doesn’t play favorites, and the three powers you earn during the game are balanced. The best is a matter of preference. That also keeps things fresh. After using Smoke’s semiautomatic-like projectiles, switching over to Neon’s sniper-like attack makes the same actions feel fresh.

The powers allow you to take out a lot of aggression on Seattle. It’s a bit toned down from Infamous 2 where you could literally create tornadoes for fun, but that also grounds Second Son and makes each fight feel like a challenge. The enemies are well balanced, so while a fight may require you to use all your abilities to survive, you won’t destroy an entire platoon of enemies and then be randomly killed by a street thug with a wildly over powered gun. Those that played Infamous 1 and 2 will probably be glad to hear that.

One of the real highlights of Infamous: Second Son though, is traversing the impressively rendered city of Seattle. Smoke is somewhat similar to Cole’s lightning power, and like Cole, Delsin climbs buildings through a parkour-like movement. It’s fairly slow. Neon, however, is anything but. You can cover huge sections of the city quickly, even running up the side of buildings, jumping off them, and then hit the ground running. The third power is even better for movement, but we won’t spoil it for you.

Once you understand the timing, Seattle becomes your playground. Jumping off one building sets you up to run down the Next. Leaping off the tallest buildings in the downtown area creates several possibilities on what you do next. It’s freedom of movement, and makes even the longest treks entertaining. While in the air, you can also spot enemies on the ground and rain down enough vengeance and furious anger to make Samuel L. Jackson jealous – but even a demigod can grow bored of smiting foes.

Second Son’s Seattle consists of 14 districts, spread across two areas separated by a broken bridge that becomes accessible before the game’s halfway point. Each of the districts starts out under the control of the D.U.P., with their influence measured by a percentage. Completing sidequests in each district weakens the government’s grip; when it falls under 30-percent, you can initiate a fight with the D.U.P. for control of the territory. After crushing them beneath your super powered boot, you unlock fast travel (although you probably won’t use it much since your powers make travelling a highlight).

The territories all offer the same challenges; one district might have more or less of one sidequest, but they all follow the same pattern. You collect Shards (which are used to upgrade powers), attack command posts, find audio logs, and a few others. Then you do the same in the next district. And the next, and the next, and so on. There are 14 districts in total, which means you’re essentially doing 14 nearly identical sidequests over and over again.

It’s tough to shake the feeling that many of these missions are just padding. They are busy work and require little more than the ability to use the in-game map and to punch/shoot things foolish enough to get in your way. They extend gameplay without enhancing it. A few of these missions would have been an interesting aside, but the repetition makes them feel tedious throughout the 15 or so hours of the game (including all the sidequests).

The story missions do offer some much needed variety, even if they all follow a fairly traditional style. You chase characters and objects, you fight D.U.P. enemies and a boss or two, you destroy enough property to make an insurance agent weep. For a game that is brimming with originality when it comes to gameplay, the missions are nothing you haven’t seen before.

Infamous: Second Son isn’t the killer app that will help PlayStation 4s fly off the shelves that some may hope it is. It is, however, a well-made and polished game with plenty of gameplay options, and lots to see and do – even if repetition hurts some of the sidequests. Still, it delivers on the promise of freedom when it comes to the powers at your disposal, and there’s nothing quite like smashing up a beautiful digital city like an angry demi-god.

The best multiplayer games on PS4

Design your own PS5 controller with this handy tool