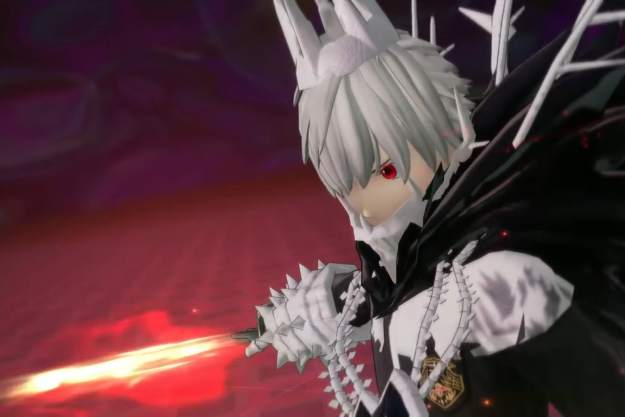 “Monark tries a lot of new ideas, but only finds success with an intriguing battle system ... and even that has a mileage that may vary.”

Monark’s main claim to fame is the fact that former Shin Megami Tensei devs are the masterminds behind it. This, plus the two-hour taste of the game that the recently released demo fed me, was enough to get me excited. So when I finally got my hands on the full product, I was surprised to find that the final result left me feeling so unfulfilled.

What I was met with is a game that brings some great ideas to the table, but doesn’t have any idea how to use them to their fullest. The ideas that Monark presents the players with are both new and borrowed from the past. The only issue is that Monark quickly falls into a rut with them, giving players a Japanese role-playing game that eventually runs out of steam.

Hit the books and stick to them

Monark’s protagonist awakens in a madness-inducing mist surrounded and filled school of Shin Mikado Academy, where no one has a way in or out. This mist has trapped students in various areas and driven people within it to insanity. Players join up with the principal, a group of students, and a demonic plushie. The party learns that the mist appears when a human becomes a Pactbearer and forms a pact with the highest-ranking demon, a Monark, and unleashes its power in the real world. The team is tasked with defeating the seven Pactbearers and their Monarks.

The plot is typical for a JRPG of this style, but that doesn’t make it unenjoyable. It’s actually a decent time and has a somewhat interesting twist later on.

The core weakness of Monark’s storytelling is the characters. Players follow a crew of stereotypical characters that share the same arcs relating to base-level mental health issues. That’s a real missed opportunity in a game that’s releasing after Tales of Arise, which confidently explores deep themes like race and class issues.

Like Monark, Tales of Arise has a simple story but offsets that with the depth and charm of its characters, their backstories, their missions, and its themes which makes it engaging the whole way through. Monark doesn’t hit that nail in the slightest and left me completely uninterested in anything that was going on with its characters or setting, despite the multiple ending nature it shares with Shin Megami Tensei titles. This isn’t helped by the lack of urgency I noticed in so many areas. Supernatural plot elements are treated like everyday occurrences. This happens even in the beginning when the protagonist wakes up and everyone treats his loss of memory and the mist like a minor annoyance.

While the story didn’t pull me in, the combat fares much better. Starting with the Monark demo, I was immediately impressed by what new ideas this game brought to the table. There’s a balance that Monark’s battles seek to attain, and I think it comes close but could use some fine-tuning to really hit a home run.

This is a non-grid-based tactical JRPG, placing players in control of a party of up to six characters on a map where they can move a set amount of space within a circle, using and avoiding hazards while fighting enemies at the same time. This piece of Monark’s combat formula interested me, as it put extra focus on character placement with its free-roaming nature. For example, characters can attack together if they’re close by and can attack without fear of being counter-hit if they’re behind the enemy. Many times, I found myself baiting an enemy nearby and having two characters run behind them to double attack from there.

Characters can use physical-based attacks called Artes and magic-based attacks, buffs, and debuffs called Authorities. However, these abilities cost more than just MP or BP. Certain Artes can take health to use against enemies and Authorities raise the MAD Gauge, which is the focal mechanic of Monark.

All these mechanics work in tandem to make for an interesting battle system full of risk vs reward moments.

In battle, if a character’s MAD meter hits 100%, they are inflicted with a heavy defense decrease while all other stats are buffed. After three turns with this infliction, the MAD unit will be knocked out (that means game-over if the protagonist falls).

The MAD meter isn’t the only mechanic players need to watch in Monark’s battle systems. There’s also the status sharing Resonance, which gives surrounding units the same buffs and debuffs the unit using it have. Along with this comes Awakening, which players gain by being hit or using Resolve. If 100% Awakening is reached, all stats are buffed for a set amount of time. Max Awakening can also be mixed with max MAD giving a large stat buff in all areas along with free use of Arts and Authorities for three turns.

All these mechanics work in tandem to make for an interesting battle system full of risk vs reward moments. However, it isn’t without its own group of flaws.

The leveling system of the game feels imbalanced, making for an annoyingly grindy experience. I felt as if I was constantly under-leveled, and not in a fun, challenging way. The fact that Spirit, the game’s battle points that are used both to level character stats and move lists, is earned at such a slow pace and has to be used to purchase items makes it even more tedious. I had to resort to going to specific grind missions over and over to make any real progress. That’s made even worse due to the fact that you basically have to reach max level to get the true ending.

Battles can be very long and drawn out. Late-game, many of them took up to an hour due to an enemy A.I. that just didn’t want to move. Other times, the fun challenge I noticed early game devolved into a war of attrition where I’d just keep doing the same run behind enemy and attack. The novelty can wear off and that’s not what you want from your RPG’s battle system. It’s great that the game has a speed-up function, but it still didn’t help much.

The visual variety also leaves much to be desired as every enemy, apart from bosses, is just a skeleton. Stages all look exactly the same besides a simple change in the sky’s color. It’s an eyesore that this game definitely could have done without.

The overworld exploration segments are easily the lowest part of the game. Players wander through a school and are tasked with solving puzzles, talking to everyone they come across, and finding phone numbers in books to travel to different Otherworld battle rooms.

What makes exploration so weak is that the school is one of the blandest overworlds I’ve ever traversed in an RPG. Everything looks exactly the same as if I was playing a literal hallway simulator, and it isn’t helped by the game’s poor graphics. The repetitive gameplay loop just makes that even worse.

The overworld exploration segments are easily the lowest part of the game.

However, the game definitely nails the dark atmosphere it’s going for. While walking through the mist-filled halls, you’ll hear the sounds of lockers banging, moans of madness, and more. It all works really well and I had some generally freaky moments because of it all. I just wish I could say the same about the monster designs.

Monark is a new take on a tactical role-playing game that brings a lot of new ideas to the table. It features an extra focus on character placement, more freedom in movement, synergistic mechanics, and a horror tone that isn’t seen much in the genre. It just feels like it doesn’t know exactly what to do with it. The story is a common one with a basic look at mental health through its characters, and every inch of the gameplay feels like it loses direction after a set amount of time. Even the most hardcore of anime-esque JRPG fans may struggle to find enjoyment in this one, as one chapter was more than enough to cover all the game’s bases for me.

Monark will last around 50 hours to beat a single ending, and a lot of that time comes from the grinding. However, to get the true ending, you’ll be putting in about 80 hours.

There’s no shortage of great JRPGs as of late. With games like Shin Megami Tensei 5, Tales of Arise, Yakuza: Like a Dragon, it’s easy to say you should look elsewhere. For those looking for something more tactical such as Monark, you may want to check out Disgaea 6 or the grand strategy game, Crusader Kings 3.

No. I don’t recommend buying Monark unless you’re very curious or really like the battle system. If you’re interested, definitely try the demo first on PlayStation or Switch.