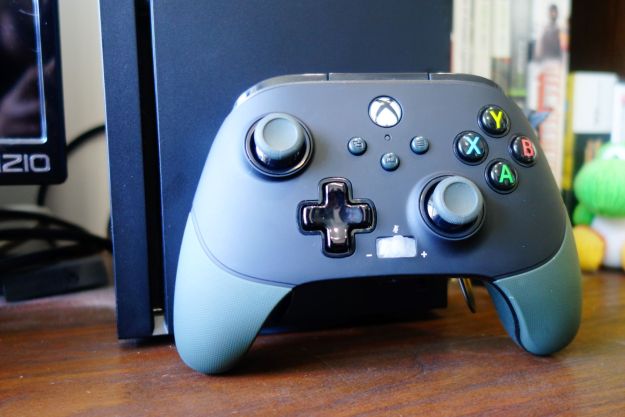 “PowerA's Fusion Pro 2 is a great value at $90, but you get what you pay for with this third-party controller.”

Let’s get something straight: The Xbox Elite Series 2 is the best video game controller on the market today. Unfortunately, it’s also one of the most expensive. Perhaps sensing an opportunity, third-party manufacturer PowerA has stepped up with a direct competitor to Microsoft’s own gamepad with the Fusion Pro 2.

This wired controller is built with Xbox Series X|S in mind and features many of the same extras as the Elite Series 2 at a significantly lower cost. It’s a robust package complete with back paddles, trigger locks, volume control, and much more. At a $90 price point, it seems at first glance like a major value over the $180 Elite Series 2.

The Fusion Pro 2 is indeed a solid third-party option for those looking for an Xbox controller with some bells and whistles. Just prepare a classic case of “you get what you pay for” here, as it’s lacking the tight design and polish of a proper Microsoft product.

It’s hard to deny what a strong deal the total package is. For $90, Xbox players get a ton of features here that aren’t present on a standard Xbox controller. For starters, it comes with a paddle pack, adding four back buttons to the controller. That alone is one of the Elite Series 2’s primary selling points.

On top of that, the controller comes with trigger locks that allow players to adjust the tension on each trigger. There are three different settings for each, allowing for some very specific controller adjustments. There’s also a volume control dial on the bottom of the pad, which allows players to easily turn voice chat up and down. Pressing in on the dial mutes chat as well, which is incredibly handy to have a thumb click away.

Those are the biggest features, but there’s a lot more where that came from. The package comes with removable faceplates, antifriction grips, extra joysticks, and a carrying case to hold it all. It doesn’t have all the swappable parts that come with an Elite Series 2, but it makes up for that with the bonus features.

It’s hard to deny what a strong deal the total package is.

The price point really goes a long way here. By comparison, PowerA’s Nintendo Switch Fusion controller is $100 and features far less in terms of extras. While $90 might seem steep for someone who just needs a standard game controller, it’s a genuine steal considering that a similar product costs double that.

While it’s certainly more cost-effective than an Elite Series 2, that doesn’t mean it’s inherently better. There are a lot of compromises players will make if they decide to go this route. Most notable is the fact that this is a wired controller, which is a big catch in its own right. The package comes with a nice mesh wire, but it still means that you’ll need to stay tethered to your Xbox to play.

There are a lot of compromises players will make if they decide to go this route.

Those trade-offs pop up in more subtle ways, too. The controller uses a normal four-direction D-pad, which is debatably a step down from the Xbox Series X’s more multidirectional pad. That piece isn’t replaceable either, so it can’t be swapped out down the line.

The most noticeable difference comes from the rumble. The controller’s dual rumble motors aren’t subtle; this is one of the loudest controllers I have ever heard. Leave this on a coffee table and it’ll sound like it’s drilling through it. The tech just feels a little cheap compared to the more precise rumble present in video game controllers today. It must be noted that the fact that it rumbles at all is an improvement over the Switch’s Fusion controller, which lacks feedback altogether.

Beyond those quirks, the button layout itself is perfectly serviceable. There are a few differences when it comes to depth, but this feels like a perfectly normal Xbox controller. It’s just those little details that bring its third-party nature to the forefront.

Just off the mark

The biggest feature here is the paddle pack, which adds four back buttons to the controller. There’s a lot to like about these. It’s easy to map buttons to them, the paddles feel responsive, and the pack itself can be popped out at any time.

It’s still an incredible value, but expect to feel the difference.

The positioning feels just a bit off. though. To my hands, the pack sits just a little lower than I would like. That means I had to keep my back fingers raised higher, making it hard to find a comfortable position. After playing a few rounds of Knockout City, I felt myself wanting to eject the pack altogether.

That’s a shame because the Fusion 2 has a lot going for it in the comfort department. The rubber grips are particularly nice compared to the cold smoothness of a standard Xbox controller. The trigger locks and swappable joysticks are also a welcome bonus, allowing players to really customize the feel of the controller.

Of course, comfort ultimately is a matter of subjectivity. The paddle pack might be just right for some players, while others may feel it’s just shy of a bull’s-eye. No controller is a one-size-fits-all solution, but it’s an area where Microsoft’s expertise really becomes evident. The company has spent decades creating the perfect Xbox controller, and that’s apparent when moving to a third-party option that’s lacking those subtle tweaks. It’s still an incredible value, but expect to feel the difference.

The PowerA Xbox Fusion 2 is a good budget option for anyone who wants the extras of an Elite Series 2 without breaking the bank. It’s a loaded package that comes with an impressive suite of features. Just be prepared for the third-party nature of it. Loud rumble motors, awkward back button positioning, and its wired state make this a controller that comes with plenty of compromises. If value is the key concern, it’s a strong option. It’s just not the best one available.

Microsoft’s Elite Series 2 is the better piece of hardware, though it retails for double the price tag.

Since it’s wired, you don’t have to worry about battery life. The controller itself feels sturdy enough, but it’s always hard to say how a third-party product will hold up over time. Expect to get a few years of use out of it, though.

No. Anyone who really needs the extras is probably better off shelling out extra for the Elite Series 2. Otherwise, the standard Xbox Series X controller is perfectly well-designed for more casual players.

Topics
Warzone 2.0 Season 2: release date, Ashika Island map, and Resurgence mode
The best upcoming Xbox Series X games: 2023 and beyond
MLB The Show 23 returns to Xbox, PlayStation, and Nintendo Switch this March
The best iPad Pro games in 2023: the 26 best ones to play
Best Buy will give you a $10 to pre-order Hogwarts Legacy today
Save $620 on this Lenovo gaming laptop with an RTX 3070
AMD vs. Intel: which wins in 2023?
Forspoken settings: change these settings for a better experience
Add 2TB of storage to your PS5 with an SSD and save $70 with this deal
Fall Out Boy concert in Fortnite: start time, island code, and more
Marvel Snap is dangerously close to becoming a pay-to-win game
Every video game delay that has happened in 2023 so far
All missable characters in Fire Emblem Engage and how to get them